In: PA Farm Show
With: 2 Comments

(Originally published in the Sullivan Review)

Although eaten in Europe long before the colonization of the Americas and the birth of the United State, the apple pie stands out as iconic Americana, and a contest to celebrate that tradition has become a staple of the Pennsylvania Farm Show. On Jan. 8, the first official day of the 107th PA Farm Show, 72 bakers vied for first place in the 2023 Blue Ribbon Apple Pie Contest held at the Farm Show Complex in Harrisburg.

Laurie Rauch of New Tripoli, Lehigh County, took first place, while a Sullivan County resident with numerous local wins under her apron, was surprised to find herself in the top 25 after the first round of competition, let alone the top five after that.

“After you win in the second round, they give the pies another taste,” explained Eloise Caseman of Shunk who, at 90, was the oldest to enter this year’s contest. When asked what people like so much about her pies, Eloise admits to having no idea. “They never tell me. They just tell me that I am the winner.” The lack of follow-up by the five judges surprises her, she noted, because she has served as a judge for contests and likes to tell people that the appearance, texture, or ingredients are what made the winning pie or cake so appealing. Nonetheless, a spectator referred to Eloise’s Farm Show entry as the “prettiest pie” on the table.

Not taking first place in the contest was unimportant to her. “There was no money on the fourth- and fifth-place ones,” Eloise related. “But that’s not why I was there. I just wanted to see how it went.”

Eloise is the daughter of the late Horace Carl and Florence Williams Carl of Grover, Bradford County. She said that she learned to cook and bake by watching her mother and taking home economics classes in school. She was a member of the FHA (Future Homemakers of America).

“Back in the day, we had to cook all of the hot lunches for all of the kids and teachers in the school,” she remarked, “I even bought the groceries and planned the meals.”

She didn’t do much baking when she was in school, but she sure did after she graduated. In addition to pies, she bakes cakes, cookies, and bread – the latter her family’s favorite. “I can bake 11 loaves of bread at one time,” Eloise said, proudly.

To be eligible to enter baked goods at the PA Farm Show, the participant must have won first place with the same recipe at their own county fair, and Eloise took first at the Sullivan County Fair this past summer with her apple pie. People often ask her how many ribbons she has won, so Eloise recently started county. She came up with 62 first-, second-, and third-place ribbons alone at her local fairs and another four for entries at the PA State Grange Convention.

Eloise traveled to Harrisburg with family friend Clarice Chandler. She was happy with their accommodations at Staybridge Suites, only a few minutes away from the Complex. “It was very nice. They had everything, even a dishwasher,” she related.

She had been to the Farm Show several times over the years, but not since the 1970s, and she had never entered anything before. “Everything had changed, but I liked the changes,” she noted, “I loved everything, whether it was the potato department, the apple department or whatever.”

Limited mobility kept her to the first level of the Complex, but she was still able to take in a lot. “I even bought a Farm Show T-shirt as a memento, not knowing I would be bringing home a ribbon,” said Eloise. “At 90, I just felt lucky to be there.”

One of the most appreciable aspects of the Farm Show experience, she related, was the relatively mild weather during opening weekend. “They always say that it snows on the Farm Show, and it never snowed while we were there,” she stated. “I’m one to think that God has his hands in everything, and he got us there safely and back.”

She was intrigued by the new flavor of Farm Show Milkshakes offered by the PA Dairymen’s Association – orange cream. “I was wondering, ‘How do they do that?’” Eloise explained. “I was observing the fellow making the shakes, but I couldn’t figure it out. I’d like to try to take something like that to the Fair.”

Yes, Eloise is already looking forward to this year’s county fair and possibly another run at the Farm Show. She is planning her entries to include chili, pie, cake, and possibly orange cream milkshakes if she can perfect a recipe at home. “That’s my goal in life: to just keep going and see what I can do.”

Eloise is also the Sullivan Review’s Shunk correspondent, which she made mention of to wrap up this interview because she needed to get to it.

Asked to sum up her feelings about her pie contest win, Eloise said, “It’s an honor for our little town of Shunk, the Sullivan County Fair, and all of Sullivan County.” 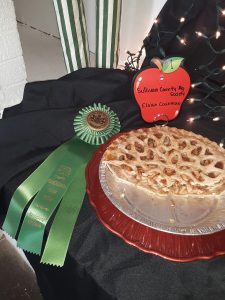 Eloise’s prize-winning apple pie as it appeared in a showcase in the Family Living Department for all to admire after she went home to Shunk.

(Another resident of the Endless Mountains won a ribbon in the Angel Food Cake Contest. Read about it here: http://www.endlessmtnlifestyles.com/family-baking-traditions-lead-to-farm-show-win/)