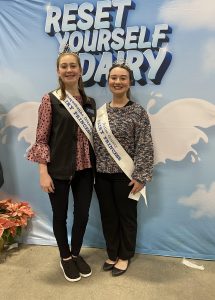 Susquehanna County’s new Dairy Princess, Holly Harvatine, is no stranger to the Pennsylvania Farm Show, which ran from Jan. 8 to 14 at the Farm Show Complex in Harrisburg. As a member of 4-H, she had shown pigs, beef cattle, and goats in the youth livestock events there since she was 8.

“It’s kind of in my blood,” Holly offered. “My mom was a Diary Princess in 1997.” Holly is the daughter of Will and Julie Harvatine, and she grew up in a cluster of family farms in Herrick Township.

“When I was in preschool for a half day, I would spend the rest of my day at my grandparents’ farm,” she related. At some point in the afternoon, Holly would drive a battery-operated child’s four-wheeler to the barn, with her grandmother at her side. Her grandfather would already be busy working. “With grandma’s help, I got to feed the calves their bottles of milk, and then I’d play with the barn cats.”

As she grew older, she noted, her responsibilities increased. She started feeding the full-grown cows and learned how to use the milking machines. By the time she was 12 and in the sixth grade, she could carry out almost every function of the milking operation.

It was about that same time, after attending a reunion of Susquehanna County dairy royalty with her mother, that she decided to join Dairy Promotion. This past year, Holly took the initiative to plan another such reunion in May at the Harford Fairgrounds that drew more than 20 past princesses, including Markie Manzer Pratt, who had served in that role in the 1973.

About two years ago, her grandparents retired their farm, so Holly started helping at her Uncle Josh’s farm just down the road. She continues to help during hay season and with milking and chores as she is available.

Her Uncle Kevin is a professor at Penn State, teaching Dairy and Ag Science. For a job shadowing assignment at school, Holly opted to visit her Uncle Kevin at University Park and work with him for a day in the lab. “I took a sample of milk from Uncle Josh’s farm and we put it under the microscope and ran some tests on it,” she recalled. “It was pretty cool to take something that I had helped produce and see it through that process.”

As a Dairy Ambassador and especially now as the Dairy Princess, Holly has been given many opportunities to attend meetings of chamber organizations, municipalities, and civic organizations.

“I really enjoy getting to talk with people about the importance of the dairy industry and help them understand what farmers do for them,” the Mountain View High School junior remarked, “and educating people on the importance of dairy in their diets.”

The health benefits of dairy was just one of many topics covered in a display at the Farm Show, where PA Dairy Promotion associates from across the state take shifts to staff a portion of the Northeast Hall where the popular dairy cow Calving Corner is also situated. A display with flaps allowed children to take guesses at questions about dairy nutrition, including 13 vital elements in milk, an increase of four from just a few years ago. In addition to the commonly known vitamins, Holly told young visitors that iodine, potassium, selenium, and zinc are now considered contributing factors to health maintenance.

Children had the opportunity to put together a puzzle depicting a road map of milk production from the cow to the table. A favorite stop at the Dairy Promotion exhibit for the youngsters was the Wheel of Knowledge, giving the kids a chance to spin the wheel themselves and win a prize for a correct guess on dairy-related questions. Somehow, with a little coaching, every child was a winner.

“I like watching their eyes light up when the make a connection and learn something new,” Holly remarked.

At Mountain View, Holly is a fan of the sciences, especially biology. After graduation next year, she would like to pursue studies that will lead her to a career in Ag Communications, so she can continue to spread the message while also being involved in the sales, marketing and events side of the industry. Holly would also like to work with schools to get them to implement more ag-related studies.

In the meantime, she encourages other youths to consider involvement with PA Dairy Promotion. “It has helped me with public speaking and getting myself out there,” Holly maintains. “You see things from a different point of view and have an opportunity to advocate for something you believe in. And it can open lots of doors for you.” 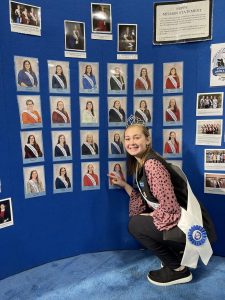 Susquehanna County Dairy Princess Holly Harvatine smiles as she finds her photo among this year’s dairy royalty at the Pennsylvania Farm Show in Harrisburg.