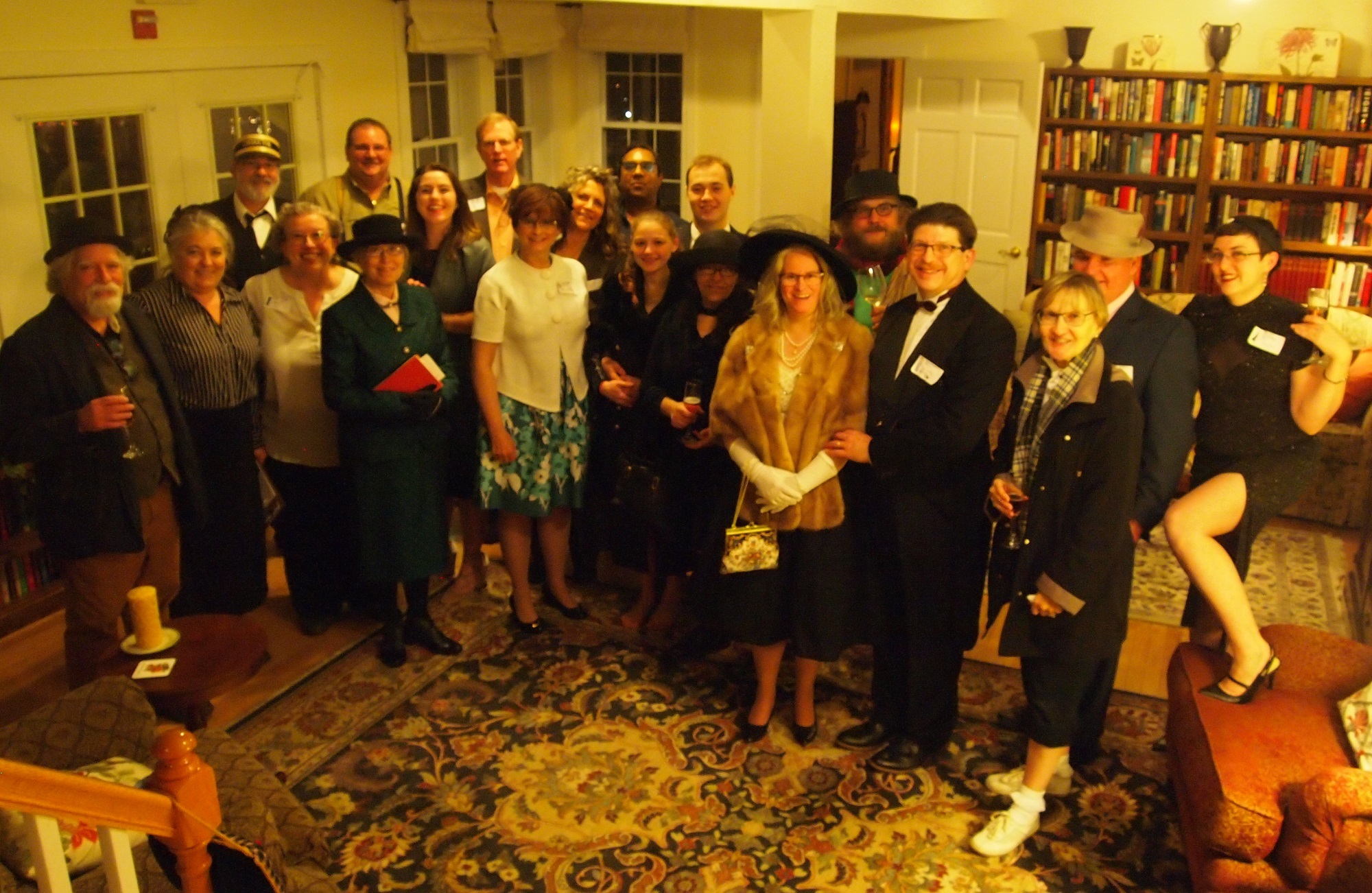 The cast of “Last Stop Murder,” just after midnight at the Rosemont Inn in Montrose.

Twenty one people participated in the mystery dinner theater – “Last Stop Murder” – held at the Rosemont Inn in Montrose on New Year’s Eve. The following synopsis of the event was offered by innkeeper Penny Eldred. The photos were taken by Elizabeth Janoski.

It was amazing to watch everyone take on their roles. Most of the guests didn’t know each other previously and had no idea who was acting or whether it was the real character of the person. Everyone, upon entering the Inn for the evening, immediately took on their assigned character role. Needless to say, many closet actors and actresses soon emerged. Most found it hard to believe they had had no previous acting engagements.

The evening began with an hors d’oerves reception, early 1950s big band music and a chance to get comfortable with their new personality. 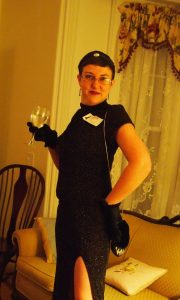 When Patty Hunt (the four– time widow, whose wealthy husbands all died mysterious deaths), immediately began to peruse the crowd for another wealthy potential husband, some of the women pulled their partners a little closer, not knowing if this was part of the act or a real danger.

Meanwhile, Steven Goldring (the wealthy American on the train) didn’t seem to mind the attention and even accepted the offer of a dance to “Moon River,” hoping to get close enough to discern whether or not Patty might be a spy. Steven’s guest for the night, Nancy Drew, had no trouble finding clues and asking all of the right questions.

At one point in the evening, a scavenger hunt took place throughout the inn, and Nancy Drew amazed everyone with her ability to sniff out hidden clues, no matter the difficulty. She had an amazing sense of which book, out of the hundreds on the shelves, might contain the next clue.

Once all of the guests had arrived, a call of “All Aboard….All Aboard”  was heard throughout the Inn and the sound of a steam train starting to roll down the track signaled Conductor (aka – Kenny Janowski) and the Porter (Daniel Thompson), to begin taking tickets from the guests, assuring that only 1st class passengers entered the 1st class dining car.

Of course, there are always those that think they should be in 1st class but had only purchase 2nd class tickets. This was the case of Princess Elisabetta, her maid Gretchen and the scientist, Erlrich Von Unterbiten. The Princess and her Maid Gretchen were outraged and were not so quiet about it, but duly sent back to wait for the 2nd class dining passengers to board.

Of course, Steven Goldring had also been trying to use his wealth to buy his way into 1st dining, but no one would go for it. (Gretchen the Maid was Elisabetta’s Mother in real life and the scientist is Gretchen’s husband) They were all hilarious and all walked away with awards at the end of the night.

The Porter and the Conductor served the guests a catered dinner of fine Cornish stuffed hen and all of the trimmings. The first class passengers ate with fine gold dinnerware, candle light and a warm fire. The second class passenger fared nearly as well with no complaints, except for Ernesto Vespucci whose brief case full of money suddenly came up missing as the Porter passed by.

Interesting Dinner conversations were heard over the ongoing sound of the train with a slight hint of a snow storm beginning to blow and howl outside of the cars. The character sitting next to Ernesto, The Student played her part so well, exhibiting angst and depression, that many of the guests were afraid to assume that she was role playing and steered clear of her most of the night. Ernesto and the Student were played by John and Doreen of “Groovy Booch.”

After dinner, coffee and a dessert of truffles with fresh raspberries and cream was served and an announcement came in from Mrs. Pardot (a detective played by Penny) that the train had been stopped by a snowstorm and that someone had been murdered during the night.  Round 2 parts were handed out in sealed envelopes, and guests geared up for the next event of the evening, finding clues, asking lots of questions of the other guests and finally an interview with the Mr. Pardot (another detective played by Penny’s husband, Peter Eldred. Each guest was asked what they saw or heard and of course everyone took notes, trying to guess “Who Dun it?”  At the end of the interviews, guests handed in their best guesses as well as votes for best actor, costume, etc.

At midnight, all of the guests moved to the front porch where we stood with champagne glasses in hand, waiting in the cold for the Clock Tower to strike midnight.

It was foggy, and with blurry eyes, we squinted to watch as the hands got closer to the “12”…finally, it happened, or so we thought?  We couldn’t be sure….was it too foggy?  Were the hands truly on the “12”?  Silence from the tower.  We began to question….doesn’t the clock tower strike midnight and chimes ring out???  Had any of us really ever been outside at midnight to listen?  Had the pinnacle of the advertised evening been one big flop?  A mistake on my part? Okay, well whatever…. we toasted and kissed each other anyway, wishing each guest a “Happy New Year!”  At 12:04… we turned to go in from the cold and so as not to disappoint us….the old clock tower suddenly began to chime. It was a good laugh. We ended the night with the murderer being revealed, awards and many new friends as well as requests for an encore in the very near future.

We had a blast and can’t wait to do it again in March sometime, dates forthcoming. Meanwhile, the Inn will have a quilter’s shut–in (retreat) on Feb. 28 to March 1, and we still have room available. We’re also having a Valentine’s Tea, Mother’s Day Tea and a Sunday afternoon of Theater/Dessert and Coffee put on by a local Theater Group 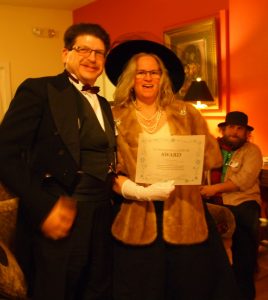 The Count and Countess Navatov were voted “best costumes” 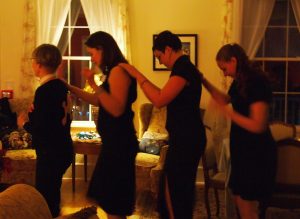