In: Lackawanna Trail Schools
With: 0 Comments

Holcombe Energy Resource employees (above, left) Evan Turner and Kevin Kitchenefsky prepare Lackawanna Elementary Center students for their first MOLU experience. With workbooks in hand, Lackawanna Trail students (below) fan out across the Elementary Center gymnasium to find answers to the questions therein at the MOLU substations. 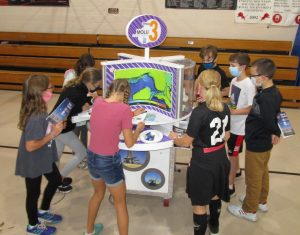 Lackawanna Trail Elementary Center principal Brian Kearney was excited to have the Mobile Oilfield Learning Unit (MOLU) back in his school after a two-year hiatus. This valuable hands-on, 24-activity learning tool co-purchased by Coterra Energy, Southwestern Energy and Williams Companies three years ago had been forced into storage by the pandemic. Its trip to Factoryville on Oct. 7 was an important re-engagement with students who often have little or no knowledge of how the gas and oil industry works, let alone the opportunities it may provide for them.

“I’d have to say, of any of the programs we’ve had come in here, this is the most successful in showing the kids some of the careers that exist in the area,” Kearney related, adding that there is a big push in Pennsylvania for career readiness, starting with fifth- and sixth-graders. “They hear about the gas industry, but they are confused as to what it is.”

Matt Austin of cosponsor Holcombe Energy Resource and employees Dale Kitchenefsky and Evan Turner served as MOLU facilitators at Lackawanna Trail, as more than 130 students worked their way through the six kiosks over the course of four hours.

“Some activities are more complicated than others,” Dale told the children. “Just get the most you can out of them.”

There are only three MOLUs in existence, developed by the Oilfield Energy Center and OceanStar Museum. This one was developed to be permanently stationed in the Appalachian region to serve Pennsylvania, Ohio, and West Virginia. “We prioritize areas where oil and gas are happening,” Austin explained. “For the kids who have drilling rigs in their ‘backyards,’ this helps fill in the gaps.”

A brief survey is part of the introduction, during which participants are also provided with pencils and workbooks. Each class is then divided into groups of one to three students to move through four activities at each of the six stations. They are introduced to a variety of aspects of the gas and petroleum industries, including safety, history, geology, oil exploration and extraction, and products derived from fossil fuels.

Afterwards, they are quizzed again to show what facts they garnered through the exercises. “The most common things that children can take out of here is how many petroleum-based products we use and how many careers and jobs are available in the industry,” said Austin. 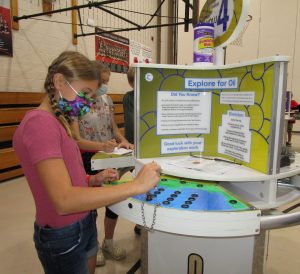 Fifth-graders June and Richard were seeking answers to questions pertaining to geology, which caught Richard’s attention, as he is “interested in searching for minerals in the Earth.” Nearby, Shelby was working alone on an activity that prompted her to explore “where the oil is and how to tell if a place has oil.”

The concept of working in the oil and gas industry piqued the curiosity of a sixth-grader named Jamison, who remarked after his MOLU experience, “I’m definitely of interested in it, but I don’t know what kind of job I want.”

That’s exactly what the MOLU’s co-sponsors and principal Kearney want to hear. Lackawanna Trail works closely with the Northern Tier Industry Education Consortium and the Lackawanna College School of Petroleum & Natural Gas to find the appropriate paths for youths who express an early interest in STEM studies and careers so that they can guide them to family-sustaining jobs in the gas fields.

Kearney noted that he would like to get fourth graders involved the next time the MOLU comes to the school. 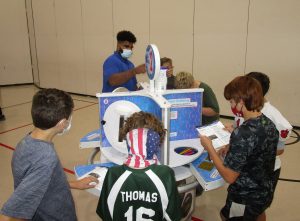 In his first day as a MOLU facilitator, Holcombe Energy Resource employee Evan Turner (background) assists Lackawanna Trail students with an activity that answers a question in their workbooks.