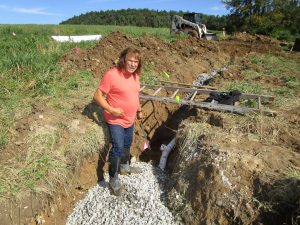 With flags and bent wire in hand, John Benscoter strides into a field in Auburn Township (top) to locate spring seeps and mark their flow lines so they can be trenched and channeled into a culvert. Above, heavy equipment moves in behind Benscoter to dig trenches that will funnel excess water from farm fields above Old Route 6 in Black Walnut to a new well that will serve three homes below.

Dowsing, divining, and water witching are archaic terms to many people that are often deemed synonymous. But to John Benscoter of Auburn Township, Susquehanna County, water witching is a specialized skill that he and those who count on him to address water needs and woes believe he has perfected. Benscoter’s father and grandfather were water witches, and John’s daughter has also acquired a knack for witching.

While some people claim they can sense an approaching storm by a “feeling in their bones,” often attributed to a lower barometric pressure, the Benscoters have centuries behind them of being able to detect the electromagnetic currents of underground water sources. The downside, John explains, is that he and his fellow “witchers” are more prone to electric shocks from static electricity, light switches, and even from an electric fence if he stands too closely to one.

“He’s very good at what he does. He has a certain natural ability,” said Curt Hepler, who owns a farm north of New Milford where Benscoter has done some work. “Not many people have that kind of electronic networking in their system.”

Online sources are generally unkind to water witching, to say the least. Wikipedia calls it a pseudoscientific attempt to locate water, ores, oil and even gravesites. The USDA website lends a little more credence to dowsing while also suggesting that, because there is water near the surface throughout the world, the process might be mere guesswork or luck. The Farmers Almanac, however, cites a 10-year study done in the 1990s in dry regions like Sri Lanka, Kenya, and Yemen where dowsers were found to be many times more accurate at locating aquifers than the geologists with whom they were paired.

In the 1980s, Benscoter found himself working with several geologists to find some broken water lines. As he watched them crawl around on the ground, comparing the color of clay and even grass, he asked them, “Why don’t you just witch it?” They laughed, he recalls, and asked him if he’d be riding a broom to work the next day. But he found the broken pipes before they did.

“A lot of people can dowse, but they can’t witch. They can feel something, but they don’t know what it is,” Benscoter maintains. “I can predict where to drill a well and hit an aquifer.” He says that his skills improved after he got a hip replacement in 2012. Witching, Benscoter insists, is an exact science, owing to the fact that clay particles under the ground become positively and negatively charged as water moves through them.

Natural springs, errant water veins, and aquifers produce electromagnetic waves that move through the air and pull at the bent wire he uses to detect them. When the wire stops turning, he knows that he is standing over a deep aquifer where water is funneling downward into the earth and where a suitable new well is a high probability.

“The guy definitely knows his stuff,” said Jared Traver of Lawton. While digging to erect a basement and foundation for Traver’s new home, water started seeping in, and he suspected that he had hit a spring. “John came in with the water witch and found 10 springs in a line and gave us a plan to get rid of the water. It’s 100 percent dry now. Everything that he did worked.”

Benscoter admits that he didn’t used to like to do wells, but more and more people are asking him to as old wells dry up and water tables shift. He holds his witching rod high, feels it turn and moves with it, while the intensity rises and falls. “When I find a well, there’s no more turn,” Benscoter explains. After finding a suspect location for drilling a well and setting a few flags, he walks to the north, east, south and west, witching all the way to make sure that his rod is still turning to the same point.

It is in fact the farmers of Susquehanna and Wyoming counties in Pennsylvania and others across the border into New York state who have come to rely on Benscoter for various water related projects. Benscoter resides on what remains of hundreds of acres first settled by his ancestors in 1837. He still farms much of that land, even tracts now owned by other people, and his neighbors are among his regular customers.

In addition to wells, Benscoter helps locate old pipes and “spring seep lines.” The latter can be handy in channeling collection lines for cattle watering systems or moving unwanted water out of yards and away from roads and pathways used by farmers to access their fields. Just last week, Benscoter was applying his skills to address concerns by his neighbor, Merry DeJong, that her old well was leaking.

Indeed, there was water laying in parts of her yard and trickling across a service road along the edge of her property. A leaking well, however, was not the problem, Benscoter insisted. It was a spring seep caused by a shift in the aquifers beneath her land. Though he is not against the development of the natural gas industry that dots the rural landscape, Benscoter is certain that drilling and fracking are cracking ancient aquifers and sending water up through new veins. “People will call me and say, ‘We’ve never had water here before,’” he related.

The solution to DeJong’s problem, he explained, is to collect the water swelling to the ground at several points along a sloping pasture and send it elsewhere. He placed a series of pink and green flags along newly occurring seeps that will direct the contractors who will follow him. The pink flag is an indicator of springs or pipes. Contractors dig to the green flags so they don’t miss the springs.

“Water always flows downhill,” Benscoter remarked. “It’s like a wild animal, and it doesn’t want to be caught. If you don’t catch it right, it gets away from you.”

Once the trench is dug, he noted, several perforated pipes will move the wayward spring veins to a solid pipe below that will take the water the rest of the way down the hill and towards a culvert. “I can’t predict the depth,” he admitted. “But, once you dig down three feet, the water will start to ooze in and fill the trench. All of the contractors know my style, they’ve worked with me for so gosh-darned long.”

In other instances, he may be able to locate an old drain tile and tie into it – a big cost saver. “In the ’60s, they would unnecessarily run thousands of feet of pipe at a great expense,” Benscoter remarked. “At about nine dollars a foot (in today’s economy), you don’t want to be off very far. The farmers know that it saves them so much money.” In addition to his intuition and intellect on the topic, Benscoter feels especially gifted that he gets “a pull” from as far away as 20 feet. At 69 years old, he jokes, “If I had to walk this entire farm to find springs, I’d be worn out.”

Benscoter’s customers aren’t concerned about who believes what. They are seeking solutions to water problems, and Benscoter has delivered. “What he does is actually quite amazing,” said Joe Conboy of Irish Hill. In addition to designing a drain tile system for his farm fields, Benscoter oversaw a more extensive project of finding springs in the fields from which Conboy could send water to concrete tubs for cattle to drink. “When you dig down where he puts the flags, more than 90 percent of the time, you hit water.”

Benscoter is currently helping the Travers build a pond and offered some unique advice for that project too. He told Traver, “Don’t dig where you think the springs are. Dig where you think they aren’t and pipe it in. That way you’ll always have fresh water and be able to see clear to the bottom.”

At the Hepler farm, Benscoter steered water for cattle watering that included a buried 1,000-gallon holding tank for hot, dry summer days when the springs aren’t flowing as freely into the troughs. When the cows drink down to a certain level, a pump comes on and refills them from the tank. “John has been a godsend to us,” Hepler remarked.

Benscoter enjoys educating others on the process of water witching and can be reached at 570-833-4250 or via email at johnrbenscoter@yahoo.com. 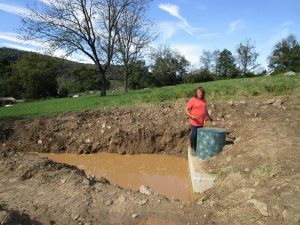 A holding tank that will serve as a new water source for a Black Walnut neighborhood fills steadily as natural channels located by John Benscoter (above) are stimulated by contractors working upstream.