In: Fred Keller
With: 0 Comments 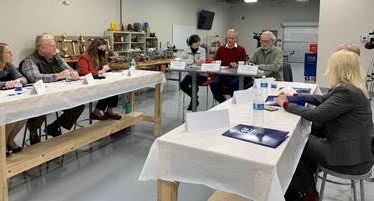 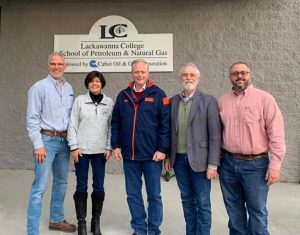 George Stark (above, left) and Bill desRosiers (right) of Coterra Energy met Rep. Fred Keller (center) and his guests Rep. Yvette Herrell (second from left) and Rep. Dan Newhouse at the Lackawanna College School of Petroleum & Natural Gas in Tunkhannock before joining them on a tour of active gas sites in Susquehanna County.

The lawmakers started the day at Lackawanna College’s School of Petroleum and Natural Gas in Wyoming County, where they held a roundtable discussion on the importance of education and preparing students for good-paying jobs in Pennsylvania’s energy sector immediately after graduation. 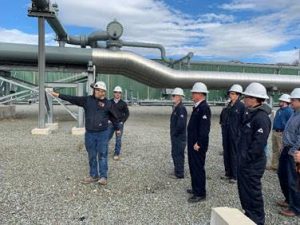 As reported by the Wyoming County Examiner:

“Fifteen years ago, there was no significant natural gas production in Pennsylvania,” Cotera’s external affairs director George Stark said. “Now Susquehanna County is the fourth-largest producer of natural gas in the country. Students can get a degree and have the ability to get a job with family-sustaining wages right here in this region.”

Commonwealth Charitable Management Executive Director Christine Clayton said that over the past 15 years, Susquehanna County had seen a 70 percent growth in the average value of homes, and she credits this to people being able to make family-sustaining wages due to natural gas jobs.

“This industry has changed the area for the better,” Clayton said. “There are so many different ways gas is helping our county, and keeping people working is one of them.”

After the roundtable, Keller, Herrell, and Newhouse traveled to Susquehanna County to visit an active natural gas drilling location. 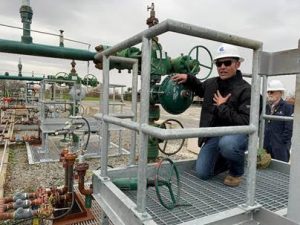 “American energy is national security, it’s good paying jobs. And we need to all understand the great work that’s happening right here in all of our districts,” said Congressman Fred Keller.

I think it’s just a great opportunity to get acquainted with this district, but also with what they’re doing in terms of innovation for the industry, I represent a state that also has a great deal of oil and gas. So, it’s nice to kind of see the challenges in this part of the country and how we can come back, collaborate, and make sure our policies are working for the entire nation,” said Congresswoman Yvette Herrell.

“The country runs on energy, that is the kind of energy that’s produced right here in Pennsylvania. So, as we make decisions that impact that ability for companies to produce that energy that we need, we need to be smart about that and come in here to see firsthand is really important,” said Congressman Dan Newhouse.

While in Susquehanna County, the group headed over to Williams Energy’s Potter Compressor Station which plays an important role in getting natural gas to market. 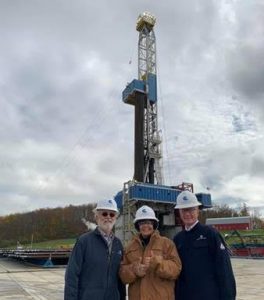 As reported by WBRE/WYOU:

“States like New Jersey, Maryland, Pennsylvania, still have demand for natural gas growing. We’re helping meet that regional demand,” said Michael Atchie, who is part of the community and project outreach [at Williams].

Atchie says Williams and Coterra work hand in hand getting natural gas through pipelines built by Williams. To consumers across the east coast.

“Williams is gathering over six billion cubic feet per day in the northern tier of Pennsylvania. That’s a tremendous amount of natural gas and we see that continuing,” Atchie explained.

The group ended the day at one of Coterra Energy’s natural gas well sites. To put the volume of natural gas being produced in northeast Pennsylvania into perspective, one well in Susquehanna County produces as much energy as 4,000 wells in West Virginia.

On the tour, Congressman Fred Keller made the following statement:

“I thank Representatives Newhouse and Herrell for visiting northeast Pennsylvania to see firsthand the importance of the natural gas industry to the Commonwealth’s students and families. While President Biden pursues an anti-energy agenda that is killing jobs and sending the cost of energy skyrocketing, we are committed to advancing policies that strengthen American energy and allow energy-rich states like ours to make the most of their abundant natural resources.”