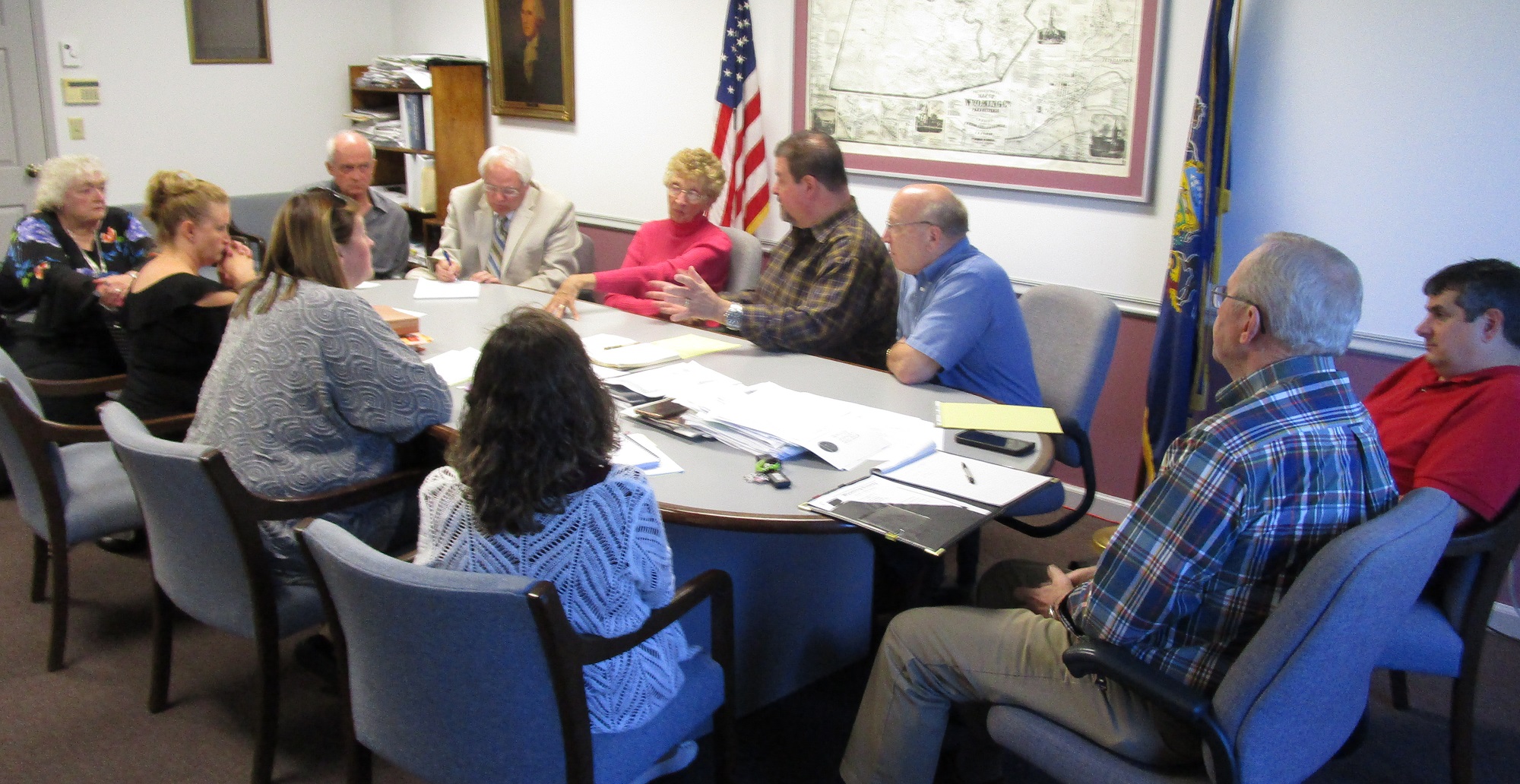 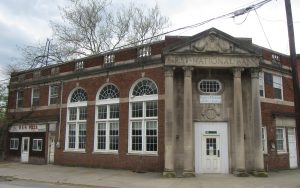 *This portion has been updated since the original posting

After years of going back and forth with the Wyoming County Housing & Redevelopment Authority (H&RA) to get an old pizza shop in Meshoppen demolished, a meeting today that also involved the Wyoming County Commissioners and their respective lawyers appears to have finally broken the deadlocks that have stymied the project. It was obvious from the dialog that everybody at the table held a piece of the puzzle but that no single participant knew everything about the situation.

Meshoppen Borough Council president John Bunnell had requested the meeting after the borough received a letter from H&RA solicitor Jami Hearn saying that the funding that had been allocated would expire on Sept. 30 and that the borough owed $6,000 to H&RA since they had not completed the project. Bunnell maintained that the amounts allocated to the municipality were never enough to keep up with the rising estimated costs for demolition.

Commissioner Tom Henry conceded that he did not know enough about the project’s status to lead the meeting and deferred the task to Atty. Hearn, who represented and did most of the speaking for the H&RA. In addition to the demolition of the former restaurant and apartment building on Bridge Street, which everyone agreed needs to be done, Hearn took a number of people at the table by surprise when she related that the H&RA deemed the demolition of the adjacent library building at the intersection of Bridge and Canal streets to be “integral to the project.”

“We’re here to determine what path to take and how best to address this blight project,” said Hearn, who was flanked by H&RA grants administrator Lisa Hahn and agency director Danielle Powell. The engineering studies, she continued, covered two scenarios: taking down just the pizza shop or dismantling both structures. “Both options are costly,” she added, noting that the alternative was to do nothing.

Bunnell indicated that the borough was still waiting for a new study from KBA Engineering of Jermyn, and that the library was not even under consideration for demolition. In fact, he stated, the former bank building is in sound condition and is currently advertised as being for sale, and several parties have shown an interest. 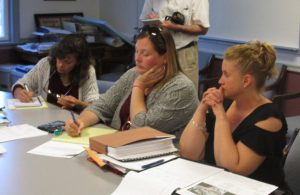 Bunnell was taken aback again when Hearn said that she had a copy of the engineering study in hand. The H&RA had, in fact, been in possession of the information since early August. According to Hahn, the KBA engineers brought up concerns about the foundation of the library and the “party” wall that the two buildings share.

Bunnell countered that the basements of both buildings were somewhat undermined by the 1972 flood, and that there had been no change to that status in the years since. A 2017 study produced by Walton Engineering showed that not only did both buildings have separate walls, he added, there is an additional firewall between them. The heat from a fire in the restaurant in the 1950s was so intense that the safety deposit boxes in the bank reportedly popped open, but there was no known damage to the walls.

The engineers from Walton, Bunnell continued, had determined that the pizza shop could be demolished safely and separately. But his primary concern was that the $68,000 previously allocated to the borough by the H&RA would not come close to covering the $180,000 cost that Walton estimated.

“They were not actual bids or proposals relevant to the DCED funding,” Hearn stated.

Bunnell questioned how the Department of Community & Economic Development had become involved, to which Hearn replied that, if everybody at the table decided to move forward with the demolition project, H&RA could secure the additional funding needed from the DCED and that the state agency would have the final say on the project. But, she told Bunnell, the scope of the project had to be determined first.

“So the party wall is making the difference?” commissioner Mike Stabinsky asked.

“There are a number of variables,” Hearn replied. “But it is a safer and more effective project to take down the library at the same time.”

“But the library is attached to the bar,” Meshoppen council member Cindy Cona interjected. “It just moves down the line.”

Meshoppen solicitor Jonathan Foster noted that the biggest change over the past decade during which the project has been contended is that the library has since closed. “Anybody who would have wanted that building is going to be looking at these engineering studies,” he remarked, making the sale of the old bank building even less likely. Foster also suggested that the members of the Meshoppen Library Association might be willing to part with the building and turn it over to the borough or the county, allowing either municipality to secure the funding.

Bunnell agreed that those associated with the library wouldn’t likely be against the dual demolition plan, but added, “I just don’t think they’ve ever been invited to be part of the project.”

“It’s an abandoned building, but is it considered a ‘blight’?” commissioner Judy Mead asked of the library.

“It may fall under that umbrella based on the engineering report,” Hearn suggested. “It could be considered part of the project.”

*The cost for the tearing down the former pizza shop by itself would approach $300,000, Hearn noted in an email sent to reporters later that day. She had quoted that figure in error at the meeting as the price tag for demolishing both buildings. The estimate for taking down both buildings at one time, comparatively, would cost about $185,000.

Hearn attributed the higher cost for the single building to “the extensive unknowns and potential impacts.” Raising both buildings as a single project would be less expensive, she noted, “since there are fewer variables to manage.”

Either approach would heavily involve PennDOT, as Bridge Street would be the access for the heavy equipment. Bunnell countered that the pizza shop might be dismantled from the rear via a service road behind Twisted Dicks, the bar attached to the library. But Hearn and H&RA officials vehemently opposed that idea. Also nixed was a suggestion that the demolition begin with the old pizza parlor to see if it alone could be dismantled.

Bunnell said that whoever does the work is going to find out that the building closest to Meshoppen Creek is literally attached to the bridge and that “everything is hollow underneath.” He also mentioned bar owner Dick Salsman again, stating, “If you take both down, he’s going to have concerns.”

“This whole thing is rolling, and we don’t have all the facts,” Mead remarked.

If the Library Association opts out, Hearn cautioned, and plans are made to move forward without them, “It’s too late for the library. They can’t change their minds next month.”

“It’s going to cost more to do both, but it’s going to be easier,” said Henry. “Let’s make this happen.”

Hearn reminded everyone at the table that time is of the essence due to the Sept. 30 deadline for using the funds. If all parties are in agreement within one week on the plan to demolish both the pizza and library buildings, the H&RA can apply for an extension on the grant and for the additional funding needed. At that time, a timeline and delineation of responsibilities would also be determined. The $6,000 recently billed to the borough of Meshoppen would be absorbed by the new funding.

“Then everybody must fall into step,” Mead asserted.

Meshoppen Borough will hold a special meeting on Wednesday, Sept. 25 at 7:30 pm to which library representatives will be invited to help them reach a final decision which will be delivered to the commissioners and H&RA representatives at 1 pm on Thursday, Sept. 26.