(A product of the Wyoming County Chamber of Commerce)

Seven members of the Leadership Wyoming Class of 2021 marked their graduation from the program on June 16. Conducted by the Wyoming County Chamber of Commerce for the past five years, Leadership is meant to challenge the expectations of its participants and broaden their horizons. But this 10-month exploration of the cultural, legislative, and economic forces driving Wyoming County called for flexibility and resulted in some unplanned lessons.

“We kind of thought that we knew what we were getting into but not really. The worst was yet to come for Wyoming County,” Chamber president Gina Suydam said of the murky outlook when 12 class members gathered in August 2020 just prior to a surge in the pandemic. “This group was very resilient from the beginning, though, adapting to our COVID restrictions and each company’s restrictions.”

During opening remarks at a luncheon and ceremony held at Stone Hedge Golf Club, Suydam thanked representatives from the companies whose employees completed the course for trusting the Chamber and its partner organizations for doing everything possible to keep class members safe. In-person meetings were held at locations where they could spread out, and Zoom meetings were conducted when physical gatherings weren’t feasible.

The seven graduates provided an overview of their experiences to those in attendance of the themes covered during nine monthly sessions. They expressed an appreciation for the people they had an opportunity to meet and a new sense of pride in all that Wyoming County has to offer.

Jamie Chan of Procter & Gamble reviewed the first meeting, which was focused on agriculture and started at the Wyoming County Fairgrounds, which would normally have been a beehive of activity had the fair not been canceled for the year. Nonetheless, Leadership classmates learned about the fairground’s clean water initiative, met the Wyoming County Fair Queen and 4-H members who had to conduct their annual livestock auctions online.

From there, the group traveled to the Henningstead Farm, where owner Tina Henning talked to them about organic farm production; Brown Hill Farms, where they were introduced to the concept of agritourism; and the Howland Preserve, a former farm on Vosburg Neck that has since become home to hundreds of acres of walking trails and a public river access.

Chan related that Howland Preserve host Doug and Allison Wilson so impressed her with what it takes to manage such a large property, that she assembled a group of volunteers to help clear trails there in the fall. That sense of community spirit also infected Kate Kamp of Williams, who solicited staff members for weekly deliveries of food boxes to area residents in need through the FED program.

Team building and leadership qualities were themes addressed by Edgar Warriner of Elk Advisers, who led a “disc assessment” geared to helping classmates better understand their current leadership style and envision where they should be. Bryan Bockhorn of EPSCO Tunkhannock provided the summary of the session, which said had a lasting affect on him.

EPSCO recently moved Bryan to their Allentown office, which cuts more than an hour each way off his commute. “I think this group helped me get there,” he remarked, adding that he was already practicing some of the “icebreakers” at his new job that he learned from Warriner.

Other presentations that enlightened classmates to specialized services and other assets available to county residents were focused on government; heritage, culture, and tourism; manufacturing and natural gas. The county commissioners and Judge Russell Shurtleff explained the functions of the courthouse. Dr. Alice Davis provided an overview of trades education offered at the Susquehanna County Career & Technology Center and gave the Leadership team a tour of the new CDL school there.

Ann Marie Stevens spoke to the group about Tyler Memorial Hospital and apprised team members of the technologies employed there. After participating in a walking tour of Tunkhannock’s historic downtown, Kate Kamp told us that she followed up to arrange a tour for her family. “Going through it with my family made it very special to me to know that we have something like that in our county,” she remarked.

Leadership Wyoming graduation ceremonies are always bittersweet in that group members acknowledge that this journey has reached its end and they are moving on with the new skill sets they acquired through the program. But what the Class of 2021 particularly has in common is the fact that they succeeded despite the odds stacked against them by the pandemic.

Mariellen Walsh of the Lackawanna College Tunkhannock Center was just one team member to thank Gina and the Chamber staff for maintaining the forward momentum. “These in-person and Zoom meetings are reflective of Gina and her understanding of the community,” Mariellen stated.

Applications are now being accepted for the 2022 Leadership Wyoming program, which will begin in August. For more information, interested individuals or employers should log on to www.wyccc.com. 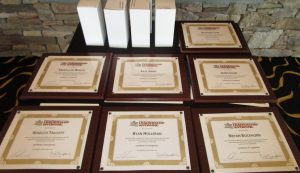