State Sen. John Yudichak and Rep. Aaron Kaufer celebrated the signing by Gov. Tom Wolf on July 16 of House Bill 732, which will allow for the construction of petrochemical facilities in Pennsylvania that will manufacture a variety of products from natural gas.

Cabot Oil & Gas Corporation has been an aggressive supporter of this legislation because it will bring jobs and economic prosperity to northeast Pennsylvania, where dry gas is so abundant. And local legislators like Sen. Lisa Baker, Rep. Jonathan Fritz, and Rep. Tina Pickett have also supported the measure.

The bill was sponsored by Rep. Kaufer (Luzerne) and co-authored by Sen. Yudichak (Carbon/Luzerne), who garnered support from key labor organizations and Chambers of Commerce by including prevailing wage as criteria. A similar piece of legislation – HB 1100 – passed both the state House and Senate with overwhelm bipartisan support in March but was vetoed by the governor.

With the COVID-19 pandemic understandably taking center stage for several months, lawmakers pulled back and retooled the bill to further address concerns of environmentalists and others and worked with the governor’s office to achieve a compromise that appealed to 40 of 50 senators and passed the house on July 14 by a margin of 163-38.

HB 732 amended the Tax Reform Code of 1971, allowing for an exclusion that sponsors contend will attract major corporations like Ellis Energy with millions of dollars to invest and vast experiencing in capturing methane and other natural gas by products and converting them to feed stock for other commodities.

In response to critics who see the tax credit as a “giveaway,” Sen. Yudichak has maintained that there will be no immediate impact on the state’s budget. Corporations must commit to spending at least $400-million in the construction of new facilities and create 800 permanent jobs. So many people newly employed with family-sustaining wages plus the impact on local businesses will provide a significant boost to the tax base. 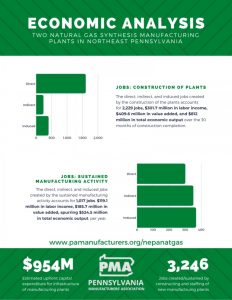 The Pennsylvania Manufacturers’ Association, in fact, estimates that HB 732 has the potential to create more than 4,400 jobs and more than $1.6-billion in economic benefits to the Commonwealth. Among the products to be manufactured that Pennsylvania is currently importing are fertilizers, alternative fuels, and plastics that can be used in the production of the PPE’s needed by our healthcare workers.

“The legislation is about bringing good-paying jobs and cutting-edge technology to northeastern Pennsylvania,” Rep. Kaufer said at a media event held on July 23. “It’s about ensuring that we will be a manufacturing hub for the foreseeable future.”

“Never has the interest of business and labor worked harder for the greater good than the enactment of the Local Resource Manufacturing Tax Credit,” Sen. Yudichak remarked. “It will create thousands of new jobs and set the stage for the growth of entirely new manufacturing industries.”

“The Marcellus has already proven itself as a resource, and one cannot overlook the convenience of having so much natural gas available in Susquehanna County, as well as the infrastructure already in place to move it south where the petrochemical plants will be built,” Cabot external affairs director George Stark offered. “The corporations will receive no tax credit until production begins. With HB 732 now established as policy, we have an unprecedented opportunity to bring manufacturing back to Pennsylvania.”

“This investment in Pennsylvania’s natural gas resource is especially critical now, as we recover from the devastating impact of the COVID-19 health crisis on the economy,” said Rep. Tina Pickett (Bradford/Sullivan/Susquehanna).

“Neighboring states have been eating our lunch when it comes to attracting jobs and expanding their economies,” added Rep. Jonathan Fritz (Susquehanna/Wayne). “House Bill 732 sends an affirmative message that Pennsylvania is open for business and poised to realize a manufacturing renaissance.”

2020-07-28
Previous Post: Congressman Keller tells Fox News “We need to get Americans back to work”
Next Post: Heat Breaks, But Summer Marches On