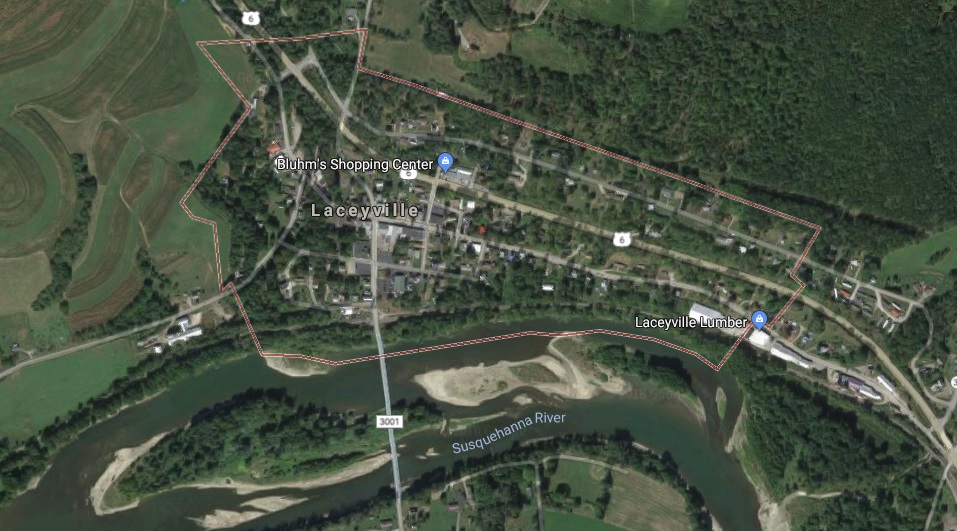 (Also published in the Rocket Courier)

Five flash flooding events in a single year have been tough on residents and municipalities throughout region. But for Laceyville, a relatively small borough with a shrinking tax base, the costs to fix the damage wrought by relentless downpours and the potential price tag for any sort of long-term solution have become a daunting aspect of next year’s budget.

“Most of the budget is ‘streets’ this year,” Laceyville Borough Council chairman Randy Brigham stated at the beginning of Monday evening’s public meeting. “Our streets have been clobbered, and our budget is very tight in that area.”

Brigham asked to modify the agenda and address the issue of street flooding upfront after two residents expressed concerns about erosion, flooding and the undermining of storm drains and driveways in their respective neighborhoods.

Heather Schillaci, who lives near the Oldest House on Main Street, told council that she has experienced flooding at her home several times already since summer and thought she might have remedied the problem, only to experience the worst flooding yet during at Oct.2 rain event. “Without adequate curbs, I cannot stop the water anymore,” Schillaci stated.

“Every one of them is different,” Brigham said of the storms and the way the water courses through town. “The streets are hit differently every time.” The biggest problem along Main Street, he has discovered, is that there are 30-inch pipes coming from Second Street and Route 6 from which water is then fed into a 13-inch pipe that makes two 90-degree turns.

On Second Street, resident Thor Trowbridge reported, a drain where two driveways intersect the street is teetering precariously on what remains of the rocks and bricks underneath it. “When frost hits,” he suggested, “it’s just going to collapse.”

“We need to be big boys and stop the patchwork,” Brigham asserted in reference to quick fixes in the wake of the storms and the lack of any long-term planning by his predecessors on the board. “The scope of things going on the borough have gotten out of hand.”

“We are correcting the mistakes that previous administrations have made,” council member Henry Laboranti concurred. “We are trying to fix these problems and not put a bandaid on them.”

Laceyville does not have a streets crew, which leaves whatever work has and can be done to Brigham, a handful of volunteers and local contractors who, he noted, have responded whenever they are summoned. “But the days of just calling Clarks to piece-meal fix things are over,” he asserted.

In lieu of knowing exactly where the funding might come from, Brigham announced that he had walked around town with representatives from Joseph P. Lehman of Altoona, looking at four key areas of concern. The initial consultation was free, he noted, but the next step is to have them conduct an engineering survey of the sites that would provide elevation maps, from which mitigation projects could be drawn up during the design phase.

The survey for all four sites is set not to exceed $7,750, but the cost for just the design phase of the two projects the council agreed are most important could run more than $15,000. Brigham expressed confidence that the pair of engineers with whom he has been consulting would work with the borough to keep costs down. Joseph P. Lehman is the same firm that is working to get the borough a no-match multi-modal transportation grant from the state for the replacement of the Franklin Street bridge.

The shortfalls of Laceyville borough hardly end with the lack of a maintenance plan or crew, as Laboranti and Brigham discussed aloud. The relatively young council is still in the process of learning just how much was left unfinished over the past few decades, how few supplies the borough possesses, and how the few things they can call their own has been spread out due to a lack of a centralized location for storage.

On the latter, Brigham reported that he had been looking at storage container options through Fulmer Storage Trailer & Containers in Montoursville. At the previous meeting, council member Kristy Fassett had suggested that the borough and the water company share a 120-square-foot shed that could be placed near the borough building on Spring Hill Road.

Citing the quantity and size of signs and equipment that the borough has purchased over the summer to address the flooding and the closed bridge, as well as light posts and lamp shades found in local basements, Brigham maintained that the shed would simply not provide enough room. He asked for a motion to have a used 320-square-foot storage container delivered at a cost of $2,600 that would provide a secure and water-tight solution for storage.

The motion was carried unanimously, and Fassett and water company manager Jaye Butler agreed to purchase the smaller shed solely for use by the water department. The borough’s storage container will be placed off the west end of Second Street near the sewer plant.

The snow plowing bid was awarded to DR Brown Hauling, LLC. The only other bidder was Zach Mowry Excavating, LLC. Both are local companies, and their bids were comparable. Council approved Dave Brown’s company primarily because they have enjoyed a good working relationship in the past.

Laboranti expressed concerns that water truck drivers supplying local gas pads are using Spring Hill Road rather than the approved route, which includes the west ends of Second and Main streets, and that they are driving to fast. He noted that there are often children playing in the area of Church and Main streets, and that the bridge that carries Spring Hill over Route 6 is taking a beating. Fassett suggested calling the companies listed on the sides of the trucks and reminding them of the approved route before calling PennDOT.

Laboranti related that he has completed a grant application to purchase some playground equipment for Donavan Park on the other side of the river and intends to solicit as much funding as he can to restore trails and the old boat access. “It’s nice green space for the community,” he remarked. “It could become an attraction.” Council also asked Laceyville police officer Kevin Costello to patrol the park on occasion.

Halloween will be celebrated in Laceyville on Saturday, Oct. 27. Details are forthcoming from the Laceyville Community & Business Partnership, which was slated to meet Tuesday evening. Costello confirmed that the event will take place from 5 to 9 pm.