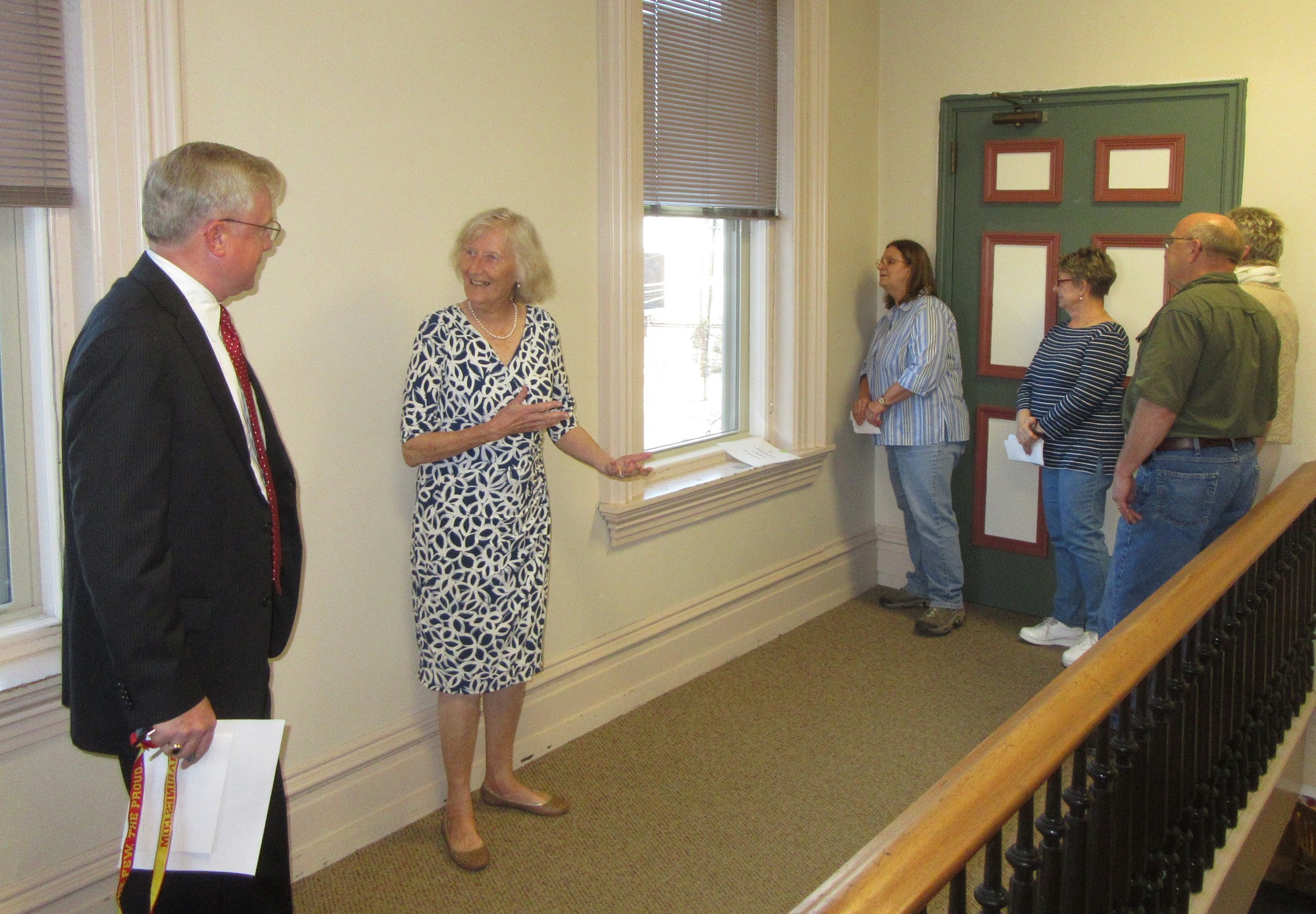 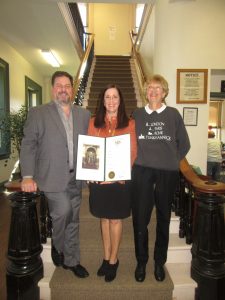 Judge Russell Shurtleff (top left) showed tour participants on Oct. 5 an interesting mark assumed to have been left behind by someone working on the courthouse windows in the 1920s. State Sen. Lisa Baker (above, center) congratulates commissioners Tom Henry and Judy Mead on the 175th anniversary of the Wyoming Courthouse with a senate proclamation on Friday.

Cake and proclamations were the order of the day on Oct. 5, as the Wyoming County Commissioners marked the 175th anniversary of the Wyoming County Courthouse. Though the structure has gone through many changes through the years, the core of one of the most revered buildings in Tunkhannock is mostly intact and lent itself to tours and a celebration last Friday.

A collection of photos and artwork depicting the courthouse through history adorned the main hallway. Plaques erected in the early 1900s flank the original entrance, near which guests enjoyed cider and cake while waiting for a chance to see the courthouse basement and the judge’s chambers. Highlights of the tours included three relatively small jail cells that once held up to 10 prisoners at a time, the balcony and bell tower entrance overlooking courtroom #1, and a relief left on window trim by a worker in either 1923 or 1925.

“Much can be said about how a county honors and celebrates its history,” said Sen. Lisa Major, who delivered one of two proclamations during the event. “Every time I step into or stand outside it, I find this to be an amazing building – one of the most iconic in our region.”

Carol Sweeney from Rep. Karen Boback’s office also brought a proclamation to commissioners Judy Mead and Tom Henry, the latter of which gave the tours of the basement while Mead served cake. Henry explained that the central part of the basement was designated as a fallout shelter during World War II. Beyond that, the jail cells, and shelves containing volumes of old court records (below) back to the 1800s is the central booking room, one of two locations in the county where people arrested for serious crimes can be processed for immediate imprisonment. (The other location is the Pennsylvania State Police barracks in Tunkhannock Township, and the jail is now located about two blocks west of the courthouse.) A small break room for employees is located nearby, as are several safes that hold quite an arsenal of county-owned weapons, according to Henry. 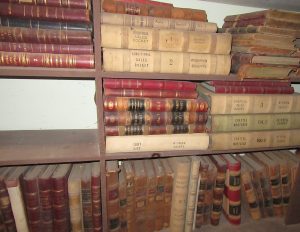 Meanwhile, on the second floor of the courthouse, Judge Russell Shurtleff, the 14th presiding judge in the county’s history, was showing guests nooks and crannies rarely seen by those doing county business during the day, as well as the room in which juries deliberate during trials.

The balcony of the original courtroom is void of the benches that used to seat numerous court spectators in the days before movies and television, but some of the original windows that had been modernized over the years are stacked up against a dormer under the entrance to the old bell tower. In the tower, he noted are workers’ signatures and dates up to Sept. 11, 1911.

“The judge is more or less the keeper of the courtroom,” Shurtleff explained. With that in mind, he added that he has been trying to correct some historically-inaccurate repairs made to the room through the years or at least restore them to their original look and feel. “This is a treasure that belongs to the community, and not a lot of people see it,” he remarked.

Some of the changes that he has been able to affect with forfeiture money and limited funds allocated for maintenance as part of the county’s annual budget are the arches that were returned to the tall, slender windows and leather tops on the desks on the main floor used by attorneys. Portraits of all of the judges preceding Shurtleff hang on the walls, the last judge always perched over the jury box.

The extra large judge’s desk, the top of which is said to have been made from a single plank from a tree that once stood on the lot donated by Thomas T. Slocum for the construction of the building in 1843.

Shurtleff joked that replacing the “Brady Bunch-era” chandeliers are on his wish list, but the current cost project for installing more authentic lighting is about $30,000.

Sweeney asked if there are any ghost stories associated with the courtroom. Shurtleff admitted that he was not aware of any, nor had he every sensed anything supernatural. “But it’s hard to look at that portrait of Judge Roy Gardner and not feel that his eyes are following you around the courtroom,” Shurtleff remarked. 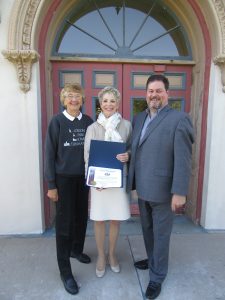 Representing Karen Boback’s office, Carol Sweeney (center) presents a proclamation from the state House of Representatives to the commissioners outside the original entrance to the courthouse. 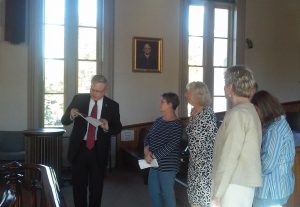 In Courtroom #1, Judge Shurtleff makes comparisons between an old photograph and the status of various elements in the modern day. 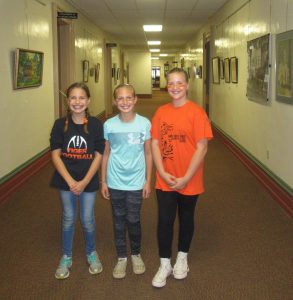 After wrapping up School Spirit Week, Tunkhannock students (from left) Katy and Hallie Brown and Karlee MacMillan stopped by the Wyoming County Courthouse to check out the paintings and photos on display in the main hall and to enjoy a piece of birthday cake. 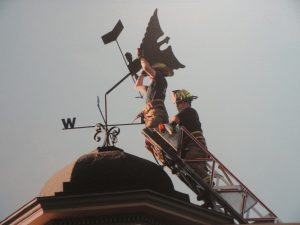 Among the images on display as part of the 175th anniversary of the Wyoming County is a photo of Meshoppen firefighters (above) replacing the weather vane knocked down by a storm and Laurette and Thelma Blakeslee (below), who once lived across Warren Street from the courthouse. 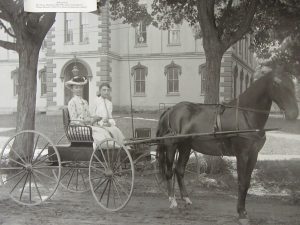 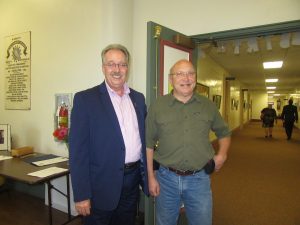 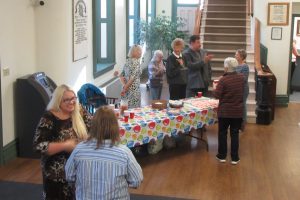