Since moving to the former Montrose United Methodist Church building last year, staff and volunteers at Susquehanna County Interfaith feel that they have been able to reach more people and provide more efficient services. The pandemic forced them to close their doors on Route 706 east of town sooner than they had anticipated, but it gave them time to reassess their programs.

“Now everything is centralized to the place so we can get everything done ahead of time. It’s a smoother operation,” said Interfaith board member Bob Owens, noting that material donations were often stored in the barns and garages of supporters until they could be processed. “This place also puts us in a better position to get to the root of poverty and help people find stabilization.”

The Thrift Store that has long been a hallmark of the agency opened in July 2020 and is fully operational at the west end of the building, the exquisite stained glass windows sending a splash of colors across the shop displays on a sunny afternoon. Donations that used to take up to two weeks to be sorted, cleaned and tagged as merchandise can now make it from trucks and trunks to the sales floor in two days.

“All of our donations are done now by appointment, which makes the process easier for those who are donating household items,” Interfaith executive director Cindy Beeman explained. Utilities like a washer and dryer and large sinks have made processing more efficient. Keeping things sanitary was challenging prior to the move.

“It’s been nice to have a lot more room,” Beeman continued. “We were able to do our entire Christmas program right from here, which was wonderful.” The church had always offered some space to Interfaith for the storage of items donated by corporations and individuals in the past, but the holiday campaign was still spread out across the town.

The dedicated crew that keeps Interfaith humming believes that remodeling the 150-year-old church building will provide a space that is thriving, dynamic, and has lasting benefits for this and future generations. The wish list for interior renovations includes the conversion of the sanctuary into an auditorium that can accommodate larger programs, a new handicapped-accessible entrance, and an elevator to allow better access from the first floor to the basement offices that face Jessup Street.

That will come in time, but the warmer weather presents an opportunity to address issues on the outside of the building. To cover the costs of an extensive face lift of the exterior, Susquehanna County Interfaith has embarked on a capital campaign to solicit community support. In addition to maintaining the structure, the goal is to make the building as warm and inviting on the outside as it has become on the inside.

Phase one is securing the exterior of the building, which will be done by Mooney Builders of Montrose. Company owner Patrick Mooney is excited about the project, which he describes as a massive job.

“It is in bad condition. It should have been done five years ago,” Mooney said of paint flaking off the walls and missing pieces of the dental work that makes the landmark building so unique. “I think people in town are going to be happy to see it sustained. It will be a nice uplift for Montrose.”

Beeman credits a representative from Hemmler & Camayd Architects for volunteering the time to assess the entire structure and provide guidance as to how to keep the improvements historically accurate. “Everything has been evaluated. The bones are good all the way up to the steeple,” Beeman related. “We just need to make these adjustments so it looks like it was.”

According to Mooney, window trim will be scraped and repainted, and the soffits and dental work will be restored. Most of the flat walls of the building will be covered in vinyl siding over a new layer of insulation.

“We’re basically revitalizing the building while keeping the original architecture as close to when it was built’” Beeman remarked. The estimated cost of the exterior renovation is $175,000, and $26,000 has already been raised for the effort. Beeman is optimistic that the community will rally to bring the project to fruition. “A lot of people have really good, strong feelings about this building.”

There are numerous ways to contribute. Donations can be made securely at www.interfaithsc.org or when dropping off useful and reusable items. Another option is through a program called NEPA Gives (www.nepagives.org), which directs people to set up a page on Facebook to solicit funds for the project. “One hundred percent of those funds go directly into our account,” Beeman maintained. 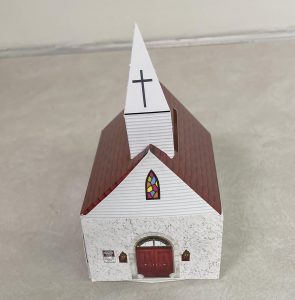 Small cardboard churches with a slot for spare change or bills are available at the thrift shop. That unique approach allows for a slow but steady accumulation of money, and every penny counts. “It’s a nice way for parents to get their kids involved in taking care of landmark buildings,” Beeman suggested. “My goal is, by the time we pay the contractors, we will have the money for them.”

Board members and staff have no qualms about the possibility of surpassing the goal, as there are still many improvements needed inside like new flooring and electrical upgrades. Beeman and Mooney also agreed that it’s good to be prepared for some surprises.

“Whenever you start a project like this, you expect to uncover some other problems.” said Beeman. “We’ll do what we can do. We might have to do more in a few years.”