The Bradford County commissioners approved a new agency partnership and a realignment of management to help ease staffing stress at the Bradford County Manor and for Children & Youth Services. They also provided information for upcoming COVID vaccination clinics for veterans and persons in groups 1A, B and C.

Early in the meeting, the commissioners approved an agreement with Medical Solutions for temporary staffing services at the Manor. Commissioner chair Daryl Miller explained that the partnership would provide an additional resource for hiring RNs and LPNs.

“Nurses are in short supply at the Manor,” Miller explained.

“There are shortages of nurses everywhere,” fellow commissioner Doug McLinko stated. “We still are staffed. We have people picking up extra shifts or staying on. We have to make sure that we have enough people to fill positions if someone needs a day off.”

McLinko praised the current nursing staff but said that they are often maxed out by the overtime they have been putting in. Bradford County recently raised its per deim – or part-time – rates to make them the most competitive in the region. “I think that people interested in per diem work will be pleasantly surprised when they check into it,” he suggested.

Current human services director Mayme Carter will oversee the new staff members, who are being brought back under the umbrella of her office. Part of the reason for reverting back to the former structure, the commissioners explained, is a shortage of CYS employees.

When former human services director Bill Blevins retired, Miller noted, “We separated them out to see if we could facilitate the operations that way.” Since the conviction of Penn State football coach Jerry Sandusky on child sexual abuse charges, the state has imposed a litany of new regulations on CYS across the Commonwealth, which has overwhelmed some working in the field.

“It’s a very difficult arena to work in,” Miller remarked.

“It was no fault of theirs,” McLinko maintained. “So we’re trying to make it better. We’ll see how it works.”

The salary for Carter, who will also oversee drug & alcohol services for the county, was increased to $39.63 per hour to reflect her expanded role.

“I’m very excited about this hire. Mayme is a terrific person for that position,” McLinko stated. “Anyone who knows Mayme knows that she is a problem solver. I’m confident that it will work well. Our friends in other counties have done the same thing, and they are very happy.”

The commissioners are also reviewing the salary of assistant district attorney Brian Gallagher who has assumed the management duties of the department in the absence of DA Chad Salsman, whose law license was temporarily suspended in the wake of his arrest on sexual assault charges.

“They are doing a phenomenal job, considering the circumstances,” Miller said of DAs office staff. “They’ve had a lot of things thrown at them, including a new murder trial.”

No Shortage of Vaccines in Bradford County

When asked for a COVID update for Bradford County, Miller responded, “The numbers are going back up again, which is concerning to everyone. But, as those numbers go up, so are the numbers of those who have been vaccinated.”

He went on to announce two upcoming clinics, including one specifically for military veterans and their spouses and caretakers. It will be conducted at the Towanda American Legion on Thursday, April 15 from 9 am to 2 pm. Preregistration for the single dose Johnson & Johnson shot can be completed by calling 570-830-7076 Monday to Friday between 8 am and 8:30 pm.

Guthrie Robert Packer in Sayre has been the recipient of abundant doses of COVID vaccine and is, in fact, having trouble finding ways to get them into arms. “They are having a difficult time filling (appointment time) slots,” Miller told EndlessMtnLifestyles.com after the meeting.

In addition to considering mobile clinics around the county, Guthrie will conduct a three-day vaccination clinic at the former Kmart building in Athens Township from Wednesday to Friday, April 14 and 16, from 7 am to 7 pm each day. Residents in groups 1B, and 1C can make an appointment through eGuthrie online or by calling 866-GUTHRIE. There will be a limited number of doses for walk-in vaccinations on April 16.

“They are continuing to vaccinate the 1A people as well,” said Miller, who cited current estimates that only about 40 percent of those 65 and older in Bradford County have been vaccinated. “We’re hoping that they continue to get the quantity of vaccines that they have been getting.” 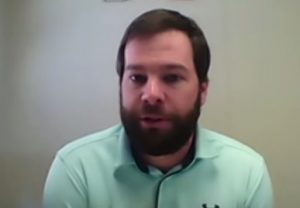 County planning and public safety director Matt Williams (above) was on hand to read a proclamation acknowledging April 11 to 17 as National Telecommunicator’s Week in Bradford County. While the proclamation referred also to the many first responders who communicate with the county’s 911 Center, Williams and the commissioners singled out 911 dispatchers for special recognition.

“They are the first point of contact in what can be the worst day of a caller’s life,” said Williams.

“The first responders depend on them for information for their safety and for the victims,” commissioner John Sullivan added.

“It’s a lot more than just taking a 911 call and getting the emergency units to respond,” Miller stated. “It’s a highly stressful job at best. ‘Thanks’ isn’t really enough for what they do.”

McLinko noted that the 911 center has come a long way since John Mosser ran it from a basement at the SCI building with 12 phones on the wall. The new John Mosser Communications Center in North Towanda Township will be opening soon, McLinko reported.

County chief clerk Michelle Shedden opened eight sealed bids for the Bronson Road Roadway Improvement Project. The approach on the West Burlington Township side of County Bridge #8 to Troy Township was washed out during a flash flooding event in August 2018.

“It has been closed for far too long,” McLinko remarked.

According to Williams, the project is being done in cooperation with West Burlington Township as there is split maintenance responsibility. It is a FEMA reimbursement project.

The bids varied so much that the commissioners voted to take them “under advisement,” meaning that a county engineer will review them to ensure that they all include the necessary elements. They included DJR Excavation of Granville Summit at $88,449; Kevin E Raker Construction of Sunbury at $129,253; HRI Inc. of Muncy at $90,128; Insinger Excavating of Dushore at $65,880; Greenfield Construction of Clearfield at $171,000; Glenn O Hawbaker of Milan at 93,804; Bristol Excavating of Troy at 68,894; and MR Dirt of Wysox at 98,912.

Miller agreed that it is likely that the commissioners would accept one of the bids at their next meeting scheduled for April 22. “It should be a quick turnaround,” he stated.

Commissioner McLinko closed the meeting by asking those in attendance to remember former commissioner Ed Bustin, who died unexpectedly on April 19, 2020. “We all still miss Ed a lot,” McLinko remarked. “He made coming to work enjoyable. We didn’t always agree, but we worked well together, and he made so many things happen in this county.”