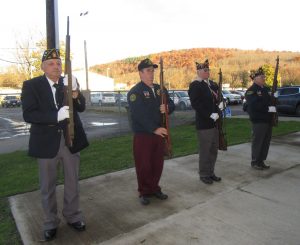 Members of the Dennis Strong Post 457 American Legion presented colors (top) at the event and conducted the gun salute (above). 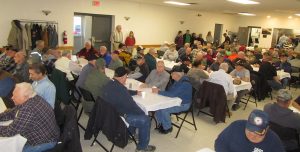 A record number of people attended the annual veterans breakfast held a Triton Hose Company in Tunkhannock on Saturday. The event was open to veterans from the surrounding area and was sponsored by Sheldon-Kukuchka Funeral Home in Tunkhannock and Sheldon Funeral Homes in Laceyville, Meshoppen and Wyalusing. Members of the Black Walnut American Legion Post 510 helped manage the reservations. 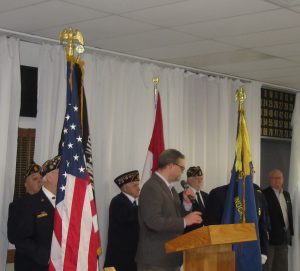 Eric Kukuchka (above) welcomed those in attendance and the color guard from the Dennis Strong Post 457 American Legion of Tunkhannock. A spirited version of the national anthem was performed by members of the Endless Mountains Barbershop Chorus (below). The Rev. Jon Buxton blessed the meal, which was prepared by Triton fire company members. 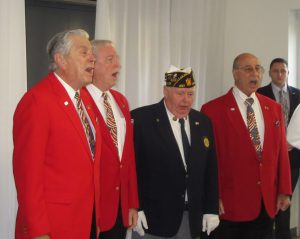 Throughout the morning, veterans from the nation’s major military conflicts from World War II forward were asked to stand and be acknowledged. According to Burnie Sheldon, there were seven WWII veterans in attendance.

Sheldon and Tom Kukuchka estimate that the breakfast has been held for about 15 years. It was started as a way to thank the many veterans who have assisted with funeral and graveside services during that time, as well as to honor the fallen.

As the number of veterans at the breakfast from more recent conflicts starts to grow, “We’re starting to hold services for a lot more veterans of the Korean and Vietnam wars,” Sheldon noted.

Long-time friends and veterans (from left) Gary Adams, Phil Hoff, Bob Tuffy, and Jack Hubert share some laughs prior to the start of the start of the annual Veterans Breakfast held at the Triton Hose Company in Tunkhannock on Saturday. The Tunkhannock residents served in the Coast Guard, Army, Navy and Marines, respectively. Hubert is the director of veterans affairs in Wyoming County. 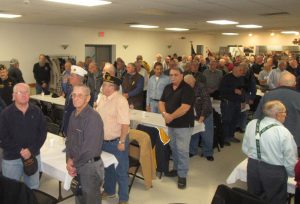 Nearly 200 veterans and their family members rise to their feet as the color guard enters the Triton fire hall. 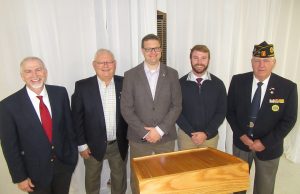 Triton Hose Company members bustling to get breakfast out for the veterans.