In: Conservation Districts
With: 0 Comments 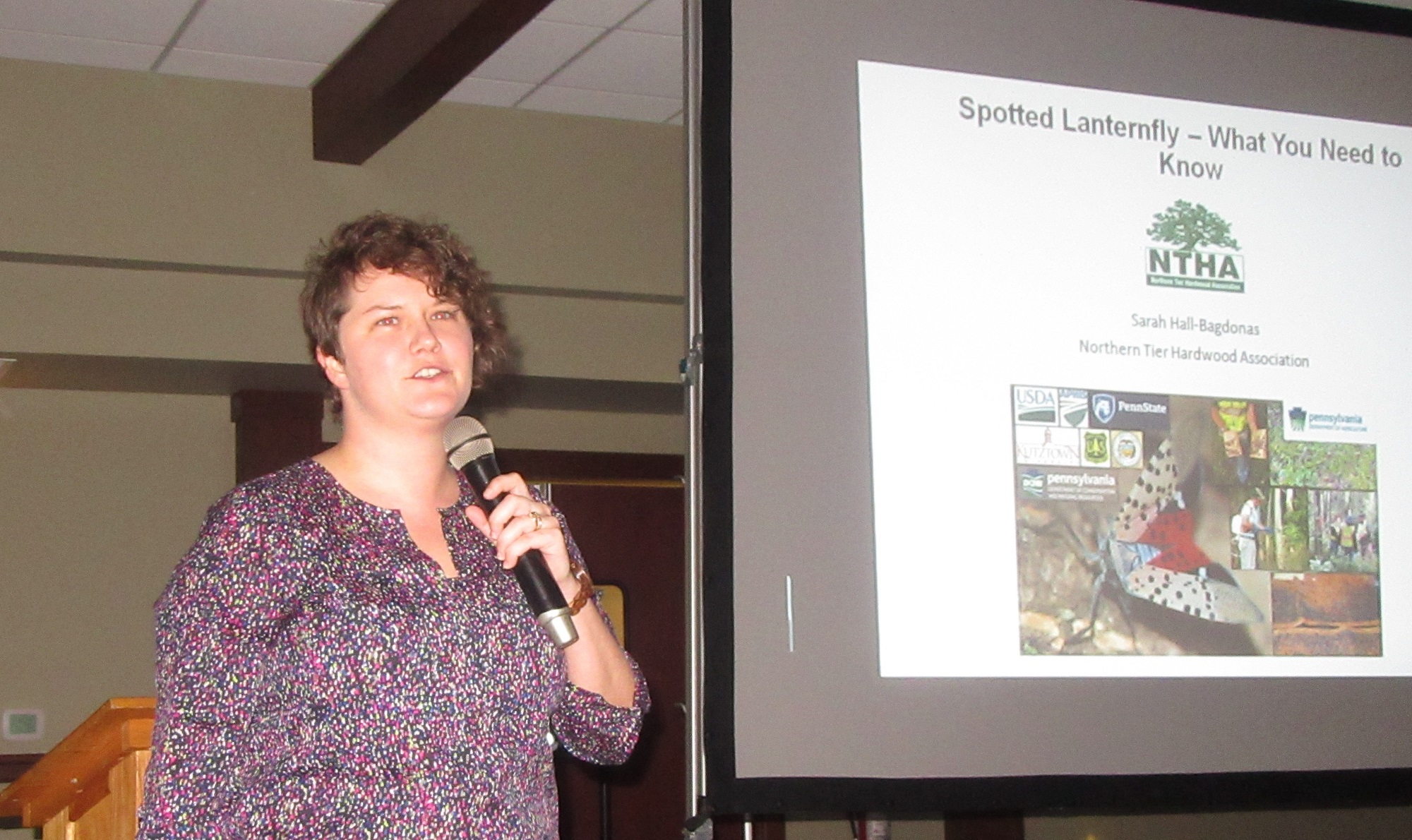 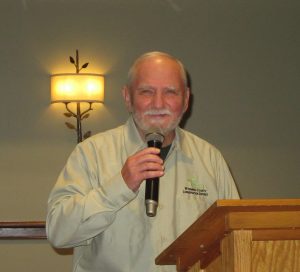 Sarah Hall-Bagdonas (top) presented alarming evidence of the potential of the spotted lanternfly to reach the Endless Mountains in a matter of years. Wyoming County Conservation District board chairman Dorne White (above) welcomed those in attendance at the agency’s annual banquet held in Tunkhannock on Nov. 9.

If those who attended the presentation about the spotted lanternfly by Northern Tier Hardwood Association program manager Sarah Hall-Bagdonas on Friday weren’t afraid of the insect prior to the discussion, they were most likely terrified by the time they left. The event was sponsored by the Wyoming County Conservation District as part of the agency’s annual banquet held on Nov. 9 at Shadowbrook Inn, east of Tunkhannock.

“That gave me the creeps,” Wyoming County Commissioner Judy Mead said after the program. “They are adapting so quickly.”

The invasive insect, native to continental Asia, is believed to have entered southeastern Pennsylvania in 2014 via shipping crates. Previously, it had moved from the Chinese mainland to South Korea, conquering the peninsula in just three years. It currently inhabits 13 Pennsylvania counties and has been found in neighboring New Jersey, Maryland, and Delaware.

While the Pennsylvania Department of Agriculture and the Penn State Cooperative Extension have been working in tandem to quarantine the pest, researchers are trying to figure out why the spotted lanternfly is behaving differently in Pennsylvania than it did in South Korea.

Efforts to understand and eradicate the insect have been difficult, Hall-Bagdonas said, because they are constantly changing their behavior. Whereas the spotted lanternfly has traditionally been attracted to the Tree-of-heaven – also originally from Asia – it has already been found sucking the life out of more than 70 addition plants in the Commonwealth in the four years since it arrived here.

Several of the plants are especially vital to the agricultural economy of Pennsylvania, including alfalfa, hops and grapevines. Hall-Bagdonas threw a quick glance around the room, remarking, “I see a number of drinks on your tables. If you like wine or beer, this is a very depressing pest.” Farmers in the quarantined counties have been discouraged from growing alfalfa that goes into cattle feed, she added. Once tainted by the insect, it can make cows sick.

While the spotted lanternfly likes eating almost everything, it appears that the Tree-of-heaven may be vital to its reproductive cycle. The nymphs gravitate to the trees just before they turn red and mature into adults with wings. But they are also starting to mate on black walnut trees and hops. Therefore, Hall-Bagdonas related, eradicating all Tree-of-heaven may simply push them to a more valuable plant. 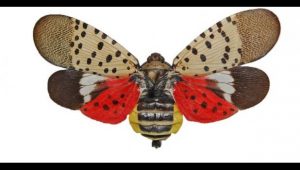 Outside of the enormous potential agricultural impacts of the pest, swarming of adult spotted lanternflies and their sticky, sugary excrement referred to as “honeydew” has become a serious quality of life issue for those living in the most highly infested areas, like Berks County. Windows left down in a parked vehicle are an open invitation, and homeowners are power-washing their decks and exterior stairs on an almost daily basis to get rid of the honeydew.

While the researchers try to figure out what pesticides might be the most effective while also being as eco-friendly as possible, Hall-Bagdonas said that it is up to everyone else to beware, be vigilant, and be proactive. Identifying and scraping egg masses off the undersides of trees and other flat surfaces and then saturating them in hand sanitizer during winter months appears to be the most practical form of eradication at this point. Swatting or squishing the nymphs and adult bugs, which she noted has become a sport of sorts in Berks County, may seem futile, she admitted, but it results in dead bugs. Banding of host trees with sticky tape has been somewhat successful.

In the meantime, she implored anyone traveling into the quarantine area to learn how to identify the insect in its many stages and check their vehicles thoroughly to avoid bringing back either the adults or their eggs. A log truck driver found a dead adult spotted lanternfly on his vehicle in Tunkhannock.

“He has been trained to know what to look for,” Hall-Bagdonas explained in reference to courses and certification offered by the Penn State Extension. As the quarantine area is expected to be expanded next year, she added. “Get ahead of the game. Get your permit so that if it comes into your zone, you can continue to work.”

Trucks from farms and landscape nurseries are being routinely inspected as they cross into neighboring states and have been sent back, she noted. It is only because of Pennsylvania’s aggressive efforts to control the insect that such business is still permitted.

“While we know that it’s nearly impossible to stop these pests,” Hall-Bagdonas stated. “If we didn’t do everything that we are doing, neighboring states would discontinue interstate trade.”

Interested readers may contact Wyoming County – Penn State Extension for the most up-to-date information or log on to www.extension.psu.edu and type spotted lanternfly into the search field. Hall-Bagdonas is available to spread the message about the pest to other groups and can be reached at 570-265-7753. 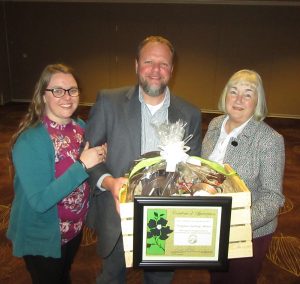