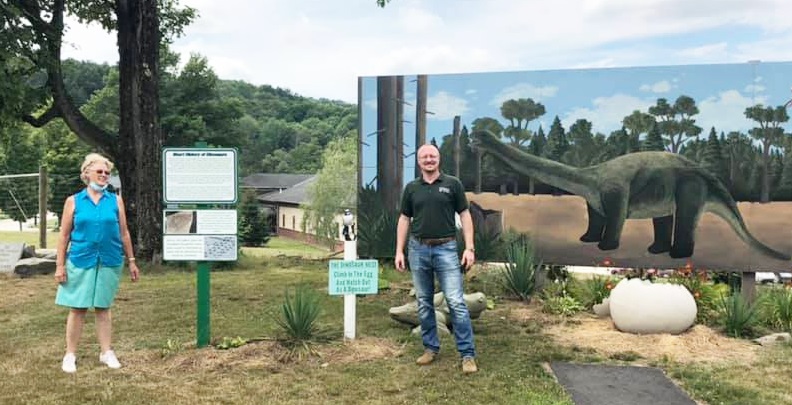 Sandy Wilmot (top, left) of the Clifford Township Historical Society gave EMHR director Cain Chamberlin a tour of the Children’s Garden there in 2020. An EMHR Partnership/Mini-Grant will be used toward the design and installation of an interactive glacier display in the coming year. Historic Tunkhannock Walking Tour guides (above) tell the story of the Methodist Church to tour guests in 2016. An EMHR Mini-Grant will help with an update of tour brochures.

The Endless Mountains Heritage Region (EMHR) is happy to announce this year’s recipients of $65,000 in Partnership/Mini-Grant funding for 2021. Twenty-three applications were submitted, seeking a total of $148,000.

“It was a very competitive process,” said EMHR executive director Cain Chamberlin. “I personally feel that the grant review committee did a great job choosing the most suitable applicants.”

The five-member committee included an EMHR board member from each of the four counties represented by the EMHR, as well as DCNR regional adviser Christine Dettore. They were tasked with ranking the funding requests and projects based on a DCNR-approved scoring sheet.

“This was the most money we’ve handed out in many years,” Chamberlin noted, “so to be able to do that after the major financial burden COVID has placed on so many organizations and municipalities is very gratifying for our Heritage Area.”

Two municipalities – Oakland Borough in Susquehanna County and Sayre Borough in Bradford County – were among the winners this year. “We wish we could fund them all, and we thank all those who applied and encourage them to continue reaching out to the EMHR for grant funding and support in the future,” Chamberlin stated.

The 12 successful applicants include:

The Rail-Trail Council of Northeastern Pennsylvania, which will put $9,500 toward the rehabilitation of a two-mile section of the Delaware & Hudson (D&H) Rail-Trail from Union Dale to Herrick Center to increase safety and create a more stable trail surface.

Troy Lions Club Foundation, which will apply $3,880 toward repairing the walking path connecting the town of Troy to Alparon Park. Vintage style lantern poles will be installed to restore safe passage for pedestrians to attend the Troy fair, football games, the swimming pool, tennis courts and skate park as they have since the 1970s.

The Wyoming County Cultural Center, which will receive $1,440 toward the revision of the Historic Tunkhannock Walking Tour brochure that was created in 2016. Due to the popularity of the tour, which features 40 historic structures including homes, businesses and churches in the borough, copies of the brochure are getting low. 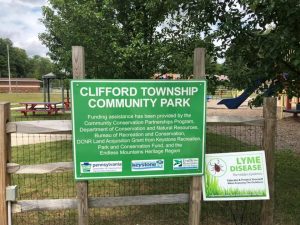 Clifford Township Community Park (above), which was awarded $4,480 to continue development of its community park with new picnic tables along a recently extended hiking/cycling trail, planting weeping willow trees along Tunkhannock Creek’s East Branch as a riparian buffer, and the establishment of a soccer field at the park in partnership with the Mountain View Soccer Association.

The Borough of Sayre, which will apply $7,000 toward the extension of the Diahoga pedestrian and bike trail, utilizing the levee system on the borough’s east side to complete the trail connection between Sayre and Athens boroughs.

Wyalusing Valley Museum, to which $5,000 was awarded to add a gutter system and proper drainage to the historic 150-year-old Lodge Hall Annex, which currently serves as a temporary exhibit area while the museum’s Main Street building is renovated. Upon completion, the Lodge Hall will serve as a research center and space for the museum’s community programming. 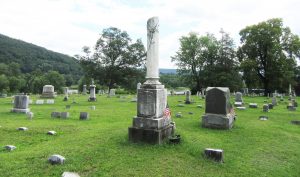 Riverside Cemetery Association, which will put $5,000 toward the production and installation of signage for a Veterans Walkway through the historic cemetery (above), which dates back to 1800. The signage will identify 25 of more than 160 veterans interred and will be able to be located via a GPS mapping application designed by the Bradford County Planning Office.

Clifford Township Historical Society, which successfully applied for $8,500 to build an exterior structure and interior lath of a 15-foot-by-40-foot glacier for its history-based Children’s Garden. Its construction is modeled after the ice formation that resulted from the Wisconsin Glacial Period, and children will be able to explore the interior of the glacier through cave-like pathways.

Oakland Borough, which will have $5,340 toward the creation of a scenic overlook next to the municipal building that will afford residents and visitors views of the historic Starrucca House in nearby Susquehanna, the railroad line, the Susquehanna River and Ira Reynolds Park.

The Leroy Heritage Museum, which was awarded $8,250 for painting the exterior of the historic 1896 hotel building that is being finished for use as a larger facility for the Heritage Museum. 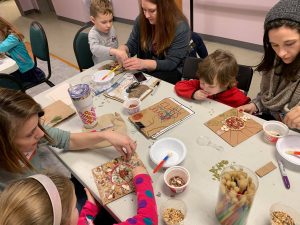 Valley in Motion, which will receive $5,000 toward the creation of a 1,800-square foot Forest City Trail Town Mural that will be visible to pedestrians, cyclists and drivers along the community’s Main Street. The mural will have a bicycle and trail theme.

Each organization and municipality was required to put up a 100 percent match, meaning that the total cost of each project is twice the amount requested or more. The EMHR encourages community members to show their support for these endeavors with additional contributions, volunteerism and patronage. 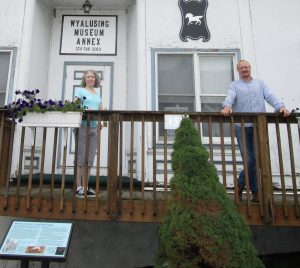 2021-06-01
Previous Post: Bluegrass Festival at Tunkhannock to Offer More Than Ever Before
Next Post: School Projects Coincidentally Convene at Patriots Cove