In: Students in the News
With: 0 Comments 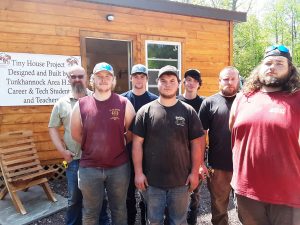 Williams Companies has been proud to partner with local schools like Tunkhannock Area High School for many years. But rarely do the stars align that several projects they have helped to support come together in one place at one time.

On a very warm recent spring day, Tunkhannock students involved in two different projects convened at Patriots Cove near Noxen, a community-driven venue for which Williams has also provided assistance. First to arrive were students from the high school’s Career and Technology Education (CTE) programs. They were there to put the finishing touches on a “tiny house” that they had started building for Patriots Cove at the beginning of 2020.

The project was stalled due to the pandemic, according to CTE program director Greg Ellsworth, “but that actually allowed for more kids to be involved.” At least 50 participants in the CTE graphic arts, metal fabrication, engineering, wood shop and cabinet making, and building trades programs were involved with various facets of its construction. 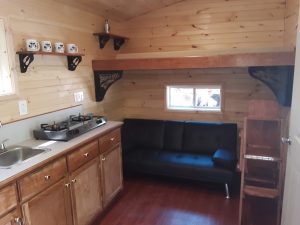 As Ellsworth explained, the result is a real, functioning house. It’s just very small. It has electricity, heat and air conditioning, and running hot and cold water. In addition to the cabinets built to frame the sink and two-burner stove, the student woodworkers installed a bed loft with a folding ladder. The metal fabrication class used plasma cutters to create ornate brackets and wall art and forged metal handles to assist in access to the 8-by-16 foot structure.

Williams has been an ongoing supporter of trades instruction at local schools to foster a well-trained workforce whose members can find jobs with family-sustaining wages close to home as an alternative to going to a four-year college.

“Williams has been helping us with mentorships as well,” Ellsworth remarked. “They’ve been a big part of what we do across the program.” Other key supporters of the tiny house project included C.C. Allis & Sons, Deer Park Lumber, Floors4Less, Herron Lumber, Nicholson Lumber, T-Town Sheds & Supply, and the THS Class of 2019. 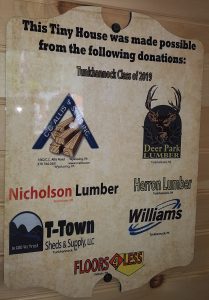 According to Patriots Cove co-founder and director Jeff Swire, the tiny house would be pressed into immediate service, housing a pair of volunteers for the May 28 Fish for the Fallen tournament. Prior to this donation by the school, on-site lodging was primarily reserved for visiting military veterans and first responders participating in various programs there.

“What we didn’t have is a place for our guides and mentors to stay while they’re here sacrificing their time for our men and women who need their support,” Swire stated. “Most of our mentors and guides are prior participants. They are coming back to continue to serve our veterans and first responders.”

Swire was impressed by the quality of the work, which gave him a personal sense of pride. In January 2020, he spoke to the CTE students at Tunkhannock about the importance of providing services for veterans and first responders with disabilities including post traumatic stress disorder.

“Tunkhannock is my alma mater,” said Swire, himself a 24-year army veteran. “That I was able to come home and inspire these kids to do something bigger than themselves really touches my heart.” 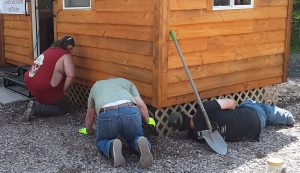 As the CTE students cut pieces of lattice to provide skirting for the unit and give it a truly homey look, another batch of vehicles pulled up bearing THS students from the Trout in the Classroom (TIC) program. They had brought buckets of brook trout fingerlings to release into Beaver Run.

“Williams helped us develop this program,” THS biology teacher Karen Kudish related. Additional support was provided by the PA Department of Conservation and Natural Resources and the Department of Environmental Protection. Williams’ liaison project manager John Pittenger helped to steer a Williams Field Giving Program grant to THS in 2019 to get the project underway.

Kudish oversees the program, but the work is done by the students, this year under the guidance of THS senior and project leader Jillian Landon, who had also participated during the previous two years.

“They are smaller than usual,” TIC team member Jenna Laughinghouse said of the fish. “Because of COVID, we didn’t get the eggs until February, instead of October.” Many schools were unable to conduct the program at all this year, Kudish added. 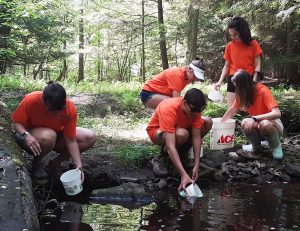 To give the fingerlings the greatest chance of survival, Swire directed the students to a “sanctuary pool,” one of many features that have been implemented over the years at Patriots Cove to enhance the quality of water flowing through the camp. Slow running water in the pool is buffeted at both ends by logs placed across the stream to increase the rate of oxygen for the fish.

Swire seized the moment to not only thank the TIC students for their work but to stress the importance of community service. “This is made possible because of individuals like you. This is not a government program. This is a ‘people cares’ project,” he told them. “When I was your age, I didn’t think that things like this could happen, but they do.” 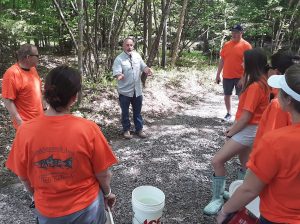 If a tiny house and tiny fish weren’t enough, the light buzzing overhead was the sound of a drone operated by THS technology education instructor Doug Wilson, who explained that Williams had covered much of the cost of the unit and course instruction.

Ellsworth noted that the donation has made it possible for interested students to obtain their Part 107 Pilots License certification, adding that there are thousands of jobs available right now for young drone operators. 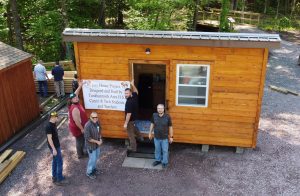 Swire felt that the irony of the three projects coming in for a landing simultaneously at Patriots Cove was fitting for one of the venue’s most ardent supporters. Pittenger, in fact, returned to Patriots Cove on May 28 and guided a husband and wife team in the Fish for the Fallen tournament.

“Williams has been an outstanding supporter since the beginning of Patriots Cove,” Swire maintained. “And we continue to try to further that relationship.”