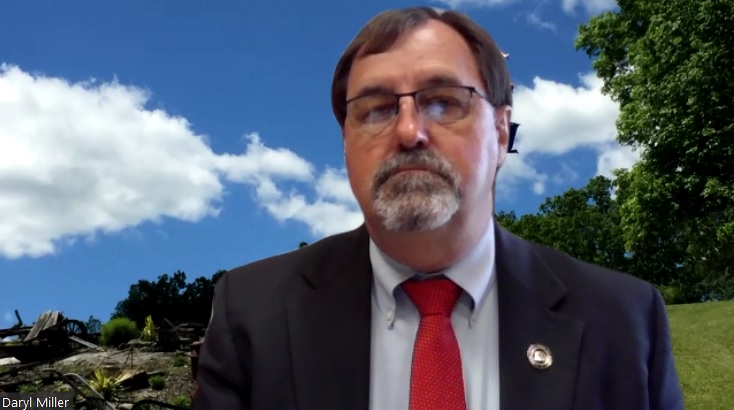 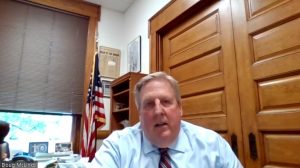 Bradford County commissioner Daryl Miller (top) and Doug McLinko (above) conducted a virtual public meeting on May 28 that was still heavily dominated by COVID-19 issues.

With Bradford County among the 17 mostly rural counties to “go green” on May 29 as per Gov. Tom Wolf’s calculated reopening of the state’s economy in the wake of the ongoing COVID-19 pandemic, the Bradford County commissioners are as perplexed as everyone else as to how many small businesses can do so within CDC guidelines, as well as what comes after green and how to get there.

“We’re trying to figure out what green is and what it means,” said commissioner Doug McLinko just prior to the start of the virtual meeting. McLinko has openly criticized the governor’s policies and rhetoric concerning the pandemic and the process of getting people back to work. “We have more information now,” he said in reference to recent statements by presidential adviser Dr. Anthony Fauci. “Our elected people need to drill down and get these answers or a lot of businesses just aren’t going to make it.”

In fact, the bulk of questions posed to the commissioners via email, Facebook, and Zoom chat on Thursday referenced the change of color status for Friday.

“The county didn’t shut people down. The county does not have a role in any of this,” commissioner chair Daryl Miller maintained, noting that he and McLinko participated in a phone conference with the County Commissioners Association of Pennsylvania just yesterday to learn more. “What are the next stages beyond green? Nobody has the answers. Nobody seems to be able to tell us how we get back to normal. The county has no ability to enforce this. The state controls the Department of Health (DOH), the State Police, the Department of Revenue.”

David Rockwell of the Troy Fair Association asked what the commissioners might be able to do to allow the event, slated to open on July 27, to stage a respectable comeback after suffering setbacks in previous years due to bad weather. “This is not good for us,” Rockwell said of his understanding of the “green light” guidelines that could limit attendance to 250 people.

Lamenting again that they do not have the answers for which so many are seeking, McLinko cited the recently canceled Wyalusing Fireman’s Carnival and other fundraisers for first responders as additional victims of Wolf’s shifting metrics and confusing plans. “The governor is not realistic. Our state officials need to move on this,” McLinko stated. “I hate the phrase ‘new normal.’ ‘New normal’ means you are losing liberties.”

The commissioners addressed a story published in the Rocket-Courier newspaper that quoted Sgt. Joshua Thompson of the Pennsylvania State Police, stating that the commissioners statements about not allowing the use of county funds for the prosecution of anyone cited for opening their businesses ahead of the governor’s orders as “reckless.” In the story published in today’s edition of the paper, Thompson also slammed district attorney Chad Salsman who announced that he would dismiss any such cases brought before him.

“I take exception to the comments,” Miller stated. “I support our police community 100 percent. But we need to question and stand up to protect our constituents. It pains me that we get in these … matches back and forth as to what we did or didn’t do.” He then proceeded to reread the proclamation he’d read two weeks prior that had resulted in the rift. (Read previous story here: http://www.endlessmtnlifestyles.com/?p=16148)

“We’re not declaring anything unconstitutional. That statement is very simple and very straight forward,” Miller said in conclusion. “What was written and what we voted on is very constitutional.”

The commissioners doubled down on their distrust of the figures coming out of Harrisburg and the guidance grounded in those numbers. Citing the current count of 46 cases in Bradford County as an example, Miller said, “We don’t know if that’s the number of tests that have come back positive or the number of people who have it. You’re asking people to base their lives and their livelihoods on this information.”

The best that the commissioners can do at this point, they maintain, is to make the information and guidelines provided by the DOH and the CDC available on the county’s website and Facebook page and encourage people to make the decision that is best for them.

“We want to do this safely. We don’t want people to get sick, but we need to get people back to work,” said Miller, suggesting that safety is a personal decision. “I wear a helmet when I ride a motorcycle. I don’t have to but I do. It’s up to each individual.”

Miller and McLinko approved the submission on May 8 of an application to the Department of Economic Development for $161,000 in CBDG-CV funds. They expect to receive all of the funds, and the money will be distributed among qualifying small business owners in the county. The amount of the grants will be determined by the number of eligible applicants and will be administered by Trehab and the county’s grant’s department.

“These funds are going to be directed to businesses that have not received any other funds from the state or federal government,” Miller explained. “If they have tapped into any of the other resources, they will not be eligible for these.”

“It really isn’t a whole lot of money,” McLinko noted. “But this has had an unbelievable affect on our small businesses.” When asked how the money could be used, McLinko suggested that it would mostly be up to the business owner. “These businesses know best what they need.”

The application will be posted at the county’s website, www.bradfordcountypa.org, and will likely be covered in advance (front-loaded) with gas royalty money.

While local businesses decide when and how to open, the Bradford County Courthouse in Towanda will be open again to the public on June 1, for the first time since its closure in March.

“On Monday, we will do away with the appointments,” Miller related. Exceptions include the Registers and Recorders office, where appointments are still needed to control the number of people in a rather confined space to access that system, and for marriage licenses. Miller said that they have not yet received word from president judge Maureen Beirne as to how and when the courts will expand operations.

“We’re still asking people to do as much online as you can,” said Miller. “It’s still an issue that we have to be mindful of, but we know that we can do this in a safe manner.”

There will be hand sanitizer stations throughout the building, McLinko added, and visitors are encouraged to use them often. Restrictions remain for visitors to Bradford County Manor due to the already compromised immune systems of residents there. “Two-thirds of the deaths in Pennsylvania are from the nursing homes,” McLinko remarked. “We have to focus on the people who are vulnerable.”

As to other agenda items, Evan Barnes was appointed to the Bradford County Airport Authority to replace Scott Hauser, who resigned. Barnes, who McLinko said has “a passion for flying” will hold the post through Dec. 31, 2023.

Pay rates at Bradford County Manor for graduate nurses and LPNs were raised to $25 and $20 per hour, respectively, to keep the Manor competitive with similar facilities.

Census return rates remain low, and time is running out. Miller pressed the importance for people to turn in their census forms to make sure that everyone is counted – especially in rural areas. “From the federal government perspective, this amounts to $2,100 per person per year coming back to the municipalities,” he explained. “It’s very easy to do.”

While the commissioners are not aware of the timelines, they do know that Judge Beirne has been conducting interviews of the 16 Democrats who have applied for the commissioner’s seat left vacant by the sudden passing of Ed Bustin on April 19.

Camp F.L.E.A., a Family Life Enrichment Adventure usually conducted at Camp Brulé by the sheriff’s departments of Bradford and Sullivan counties as an overnight stay in July has been moved to Wednesday, Aug. 12 at Camp Brule, and modified into a one-day event.

Blair Bates has been contracted by the Towanda Area School District, North Towanda Township, and the county to oversee a tax assessment appeal by DuPont. The three entities will share the cost of Bates’ salary.

2020-05-28
Previous Post: Cultural Center Gets Creative to Get Through the Downturn
Next Post: Rural Elections Directors Stunned by Governor’s Mail-In Extension