Bradford County Commissioners (top, left) Doug McLinko, Daryl Miller (right) and John Sullivan are still conducting virtual meetings through the end of June but suggested that the public and media will be permitted to participate in live meetings at the courthouse in Towanda again in July.

The Bradford County Commissioners welcomed former commissioner John Sullivan back to the board today upon his recent appointment by Judge Maureen Beirne to complete the term of the late Ed Bustin. Sullivan retired from the position eight years ago after serving the county for eight years.

“John is obviously experienced and has a lot of knowledge and brings a lot to the table,” commissioner chair Daryl Miller remarked.

“He already has a full understanding of Bradford County government,” commissioner Doug McLinko concurred, noting that he and Sullivan had previously served on the board for four years together.

Before addressing a relatively light agenda, Miller and McLinko reported that the recent primary elections had gone well, despite some glitches. Mail-in ballots, for example, were not reaching those voters who had requested them in a timely manner, which forced the county’s election department to make them available until the day prior to the election to anybody who stopped by the courthouse for one.

“To say the least, it was a challenge,” said Miller. “To everybody’s credit, it came out successfully.”

“It was a learning curve,” McLinko agreed, crediting the elections department and poll workers for accommodating a lot of changes, including the purchase of new voting machines last year and dealing with COVID-19 related concerns this year. McLinko noted that he is not a fan of mail-in voting, which he said “will change our elections office forever.”

Several recent appointments, including that of McLinko to the board of the Endless Mountains Heritage Region and Sullivan to the Bradford County Mental Health & Intellectual Disabilities board, were directly related to vacancies left by Bustin’s passing in April. 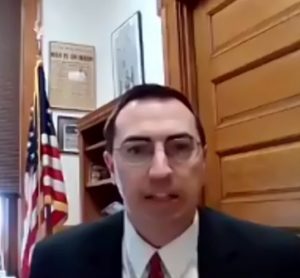 Bradford County district attorney Chad Salsman was on hand to provide some details about a new drug task force that will be guided by his office and has been endorsed by the commissioners. “At a time when people are talking about defunding law enforcement, I’m glad to see Bradford County increasing resources for drug enforcement,” Salsman stated.

The current drug task force, Salsman explained, is run out of the state’s attorney general’s office and does not serve Bradford County adequately. “It only operates in very limited area of the county as needed or when they are called up.”

The timeline is uncertain, but Salsman said that he’d like to have the new drug task force up and running by the end of summer after hiring two new employees to coordinate efforts with local law enforcement and beyond.

“The efficiency of the operation will be very much enhanced,” he explained. “If we get a tip, we can act on that right away. We don’t have to call Harrisburg and say that we have a tip that they might follow up.”

Salsman noted that he ran for district attorney on the promise of building such a task force, which will be able to work directly with federal officials. “A lot of the meth that is coming into Bradford County is coming from Mexico, through California and across the country,” he related. “Not only can we catch the people who are selling here in the county, but our officers will cooperate with the federal officers so we can help them on the larger scale. It’s an exciting prospect.”

“Families are being crushed with losses due to overdoses,” commissioner Miller remarked in his commendation of Salsman’s plans. “We’ve got to get a handle on stopping all that goes along with drug issues. It affects us in more ways than we care to imagine.”

“Green” Not Fast Enough for Commissioners

To the best of their knowledge, businesses in Bradford County have not experienced any glitches in the course of reopening under the green phase of Gov. Tom Wolf’s COVID-19 guidelines, but the pace continues to frustrate many residents and those in county government.

“There are still a lot of unanswered questions,” Miller stated. “We need to get past the green phase. Small business cannot sustain at 50 percent capacity.”

“Is green the end, or is there another phase?” McLinko asked, adding that he has heard there might be a “white” phase, which would not happen until after a vaccine is approved. “The days of having the state or federal government telling us what to do has got to end.”

Miller agreed that conflicting guidance and instruction from Harrisburg, “is driving people nuts.” The 50 percent capacity plan, he maintained, “is just not a sustainable business model. There are small businesses that have shut down and are not coming back.”

McLinko commended radio personality Chuck Carver, who participated in the virtual meeting remotely, for his co-hosting with Todd Bowers a two-hour program on WATS/WAVR with the commissioners and business owners to address COVID-19 concerns.

The general consensus of the program participants, McLinko asserted, is that “they are all very intent on keeping their employees and customers safe while allowing people to make personal decisions.”

Bradford County planner Matt Williams urged the owners of small businesses that were negatively impacted by the shutdown to contact the Progress Authority to apply for grants administered in conjunction with Trehab that may cover some operational costs like rent, mortgage and insurance.

In response to a question about the opening of Bradford County Manor to the public, Miller said decisions there are still primarily driven by PA Department of Health. Administrators continue to prohibit visitors due to spread of coronavirus at facilities in other counties. There have been no cases reported at the Manor.