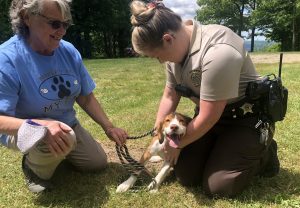 Bradford County Sheriff Megan Hurley (above, right) was smitten by a puppy brought to the Run With a View event on Sunday. She ended up adopting the dog and naming her Bristol.

The fifth annual Run With a View was hosted by the Bradford County Commissioners on June 7. Following a clearly marked 5K course through the woods and paths of Mt. Pisgah County Park, 146 runners and walkers registered in honor of the late Commissioner Ed Bustin, and there were 129 finishers.

The trail race is a bit more challenging than a traditional 5K due to the terrain, which includes rocks, tree roots, grass, dirt and a few hills. The hallmark of this first of three commissioner-sponsored runs in Bradford County is the view it affords. The skies were blue and the weather was perfect for the day’s activities. 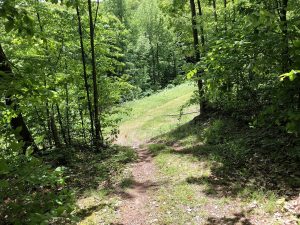 Numerous members of the Bustin family attended the event and several ran in the race. Proceeds from this year’s event were earmarked to the Bradford County Humane Society (BCHS), pet adoptions being one of many causes dear to Ed Bustin’s heart.

A puppy brought to the event by BCHS was later adopted by Bradford County Deputy Sheriff Megan Hurley and named Bristol, making this year’s event both a fundraising and pet adoption success.

Among those credited with the success of the event were John and Amey Johnson, our Parks department, the Maintenance crew, the Commissioner’s office staff and many dedicated volunteers.

The second race in the summer series – The Sunfish Shuffle – will be held on Saturday, July 11 at Sunfish Pond County Park in Leroy Township. It will be a lap race – running or walking – and the participant that completes the most loops in three hours will be the winner.

Each lap is a total distance of one mile, and an aid station will be available. All proceeds from the Sunfish Pond event will go to the Northern Tier Veterans Group (NTVG), a local non-profit group formed to provide assistance to veterans in need.