Due to technical difficulties, the start of Tuesday morning’s regular meeting of the Wyoming County Commissioners was delayed by a half hour. COVID-related topics continued to dominate the agenda. But, as Wyoming County prepares to enter the “green phase” of reopening it’s economy, the commissioners expressed a desire to return to the “old normal” rather than the “new normal” that Gov. Tom Wolf is suggesting.

That includes bringing the majority of county employees back to work at the courthouse and other county offices this past week and approving a new art display for the first floor hallway that will feature works by local school students. Commissioners Rick Wilbur, Tom Henry and Ernie King have been participating in numerous virtual meetings, learning about re-opening procedures and Chamber- and state-sponsored opportunities for local businesses hurt by the shutdown.

In a reference to weekly online sessions with Rep. Karen Boback’s Reopening Task Force, Wilbur said of the green phase, “It’s not the end. It’s the beginning. We don’t know exactly where we’ll be after green. We are anxiously awaiting what happens next.”

Some of the protocol proposed by the state that Wilbur said he will not support without sufficient quantification is the need for a vaccine before society can fully re-open. “There is a lot of opposition to that out there,” he remarked.

Secondly he cited the concept of “contact tracing,” which would be assigned to registered nurses to reach out to and recommend quarantines for people known or suspected to have come into contact with a person who tests positive for the coronavirus. “I don’t know if I like it or not. There are different feelings about it,” Wilbur stated. “It’s important, but it infringes on personal rights. I guess it’s coming through whether we like it or not.”

The rest of the meeting was geared to conducting business as usual, which includes bringing the budgets for Children & Youth and Mental Health Services up to par, expanding recycling opportunities and resuming biweekly meetings after several months of addressing the public ever week. The next regular meeting of the commissioners will be held at 9 am on Tuesday, June 23 and will be preceded by a prison board meeting.

Thursday work sessions, which are also open to the public, will continue unabated. The commissioners elected to continue airing the meetings on the GoTo platform for the sake of people who can’t attend in person, and they hope to be able to allow the media back into the courthouse for the June 23 meeting.

Outside the realm of what can resume, if even in a modified manner, was the startling news from Harrisburg last week that a new formula for funding 911 centers would result in a 50 percent cut for the Wyoming County 911 Center. Though many other rural counties would be affected, Wilbur acknowledged, “Wyoming County got the worst cut out of everybody in the whole state.”

Jeff Porter, Wyoming County 911 director, has been working with Rep. Boback and Sen. Lisa Baker, both of whom are lobbying the state’s Emergency Preparedness Committee to reverse their decision. A new vote comes on June 18, Wilbur related. “It looks like it’s going to be delayed,” he said. “At least we have another shot at having that fixed.”

A snafu with the state’s auditor general from two years ago has been rectified, and the county is now in full compliance to receive Liquid Fuels Funds, $75,000 of which will be available to municipalities throughout the county for road projects. On a similar note, bridges on Lockville Road in Exeter Township and Brides Drive in Falls Township will be inspected on Wednesday to determined the best plans for repair or replacement.

The metered process of getting recycling operations in the county up and running again will continue with recycling director Mike Rogers announcing the return of Saturday hours and a special twice-per-year Electronics Recycling Day slated for Saturday, July 11.

Beginning this Saturday, June 13, the center along Rt. 92 in Tunkhannock Township will be open from 7 am to noon. Rogers reminded those listening that drop-offs are still limited to five bags per household per week, and Wilbur asked that anybody who is able to drop off during the week continue to do so.

Bins will remain inside the gates, and the gates will be closed and locked when the center is not open or if the daily limit has been reached. Employees will be there on Saturday to ensure that what people are bringing in is recyclable. The commissioners will reevaluate their plan in two weeks.

The following price list was issued by Rogers for Electronic Recycling Day. “This has gone very well for us in the past,” he noted. “Last time, we took in more than 26.72 tons of electronics.” 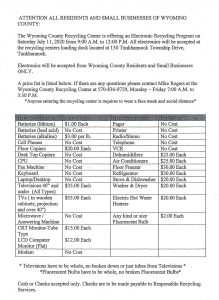 The commissioners approved a request my Marta Kovacs-Ruiz to curate an exhibit of art by high school students at the courthouse. Kovacs-Ruiz has filled the walls with art for at least a decade, Henry noted, and the art has previously always been by professionals. The commissioners also approved an allocation of $300 to help cover expenses, which they have generally done every two years.

“I don’t ever remember her doing one for the high school students, so that’s great,” Henry stated. “The art displays are great, and I think a lot of people are looking forward to coming into the courthouse to look at them again.”

Under the topic of correspondence, Wilbur commented on a letter from a county resident thanking the board for their support and accommodation of a racism awareness rally on the courthouse lawn last Friday. “We were in favor of it because it was so peaceful,” Wilbur said of the event, which was orchestrated primarily by teens and young adults. (Read about it here: http://www.endlessmtnlifestyles.com/?p=16287)

County planner and Endless Mountains Heritage Region (EMHR) member Lynnelle Farber provided some details on recipients of the latest round of mini-grants approved by the EMHR. A total of $20,000 in funding from the PA DCNR is coming to the county to support projects coordinated by the Nicholson Heritage Association, the Wyoming County Cultural Center and Keystone College.

Henry noted that a number of impressive projects in Bradford and Susquehanna counties will also receive financial support from the EMHR. “We’re all close enough to visit all of these places,” Farber agreed, in reference to sites like the Dennis Farm in Susquehanna County and French Azilum in Bradford County. (Read the details here: http://www.endlessmtnlifestyles.com/?p=16273)

A featured guest at the June 9 meeting was Wyoming Lackawanna County Farm Bureau president Dale Shupp who was on hand for a proclamation of June as National Dairy Month in Wyoming County.

Two grants totaling approximately $26,000 have been received for election expenses, especially the extra costs associated with abundant mail-in voting due to COVID concerns.

With the end of the fiscal year quickly approaching, Henry announced that public hearings for the Children & Youth and Mental Health Services budgets will be held at 10 am and 6 pm on Monday, June 22.

The Mental Health Advisory Board will meet on Thursday, and Henry said that he would make sure that the login information will be available on the county’s website.

Also on Thursday, the commissioners hope to provide additional information during their work session about a state plan to provide mortgage and rental relief for people adversely affected by the COVID-19 crisis.

The commissioners thanked Wyoming County CARES for the donation of $700 to the Commissary Fund at the Wyoming County Correctional Facility. With just 35 prisoners currently housed at the jail, Wilbur noted that each would have $20 in credit to purchase some items. With no visitation permitted over the past few months, he added, “It was a nice gesture to do something for those housed in our prison.”