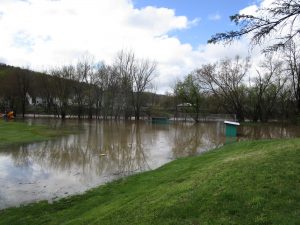 The Susquehanna River at Laceyville was rising quickly on Friday with crests expected overnight into Saturday. Meanwhile, Meshoppen Creek was backing up into the community park there. Other than a slight chance of showers Saturday evening, drier and more seasonable weather should hasten its rapid retreat without much cause for concern.

A soggy couple of weeks set the stage for flash flooding in Canton and other parts of the Endless Mountains Thursday evening. An already swollen Susquehanna River reacted quickly to the deluge and is on the rise today, collecting and moving debris swiftly downstream.

According to weather.gov, most streams are back within their banks, and the river levels are expected to peak in the “action” stage, short of even “minor flooding.” Nonetheless, those with interests along the river, such as camping sites, should take note. 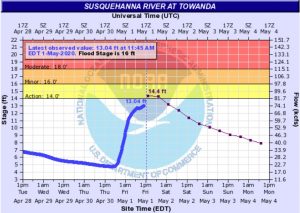 As of 1 pm Friday, readings at Towanda appeared to be falling just shy of predictions of a crest of 14.4 feet, while the river appeared to be rising a little faster than expected at Meshoppen, where a crest of 26 feet is expected just after midnight. 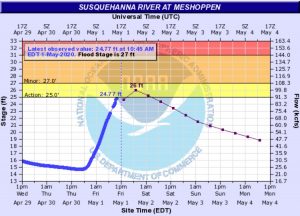