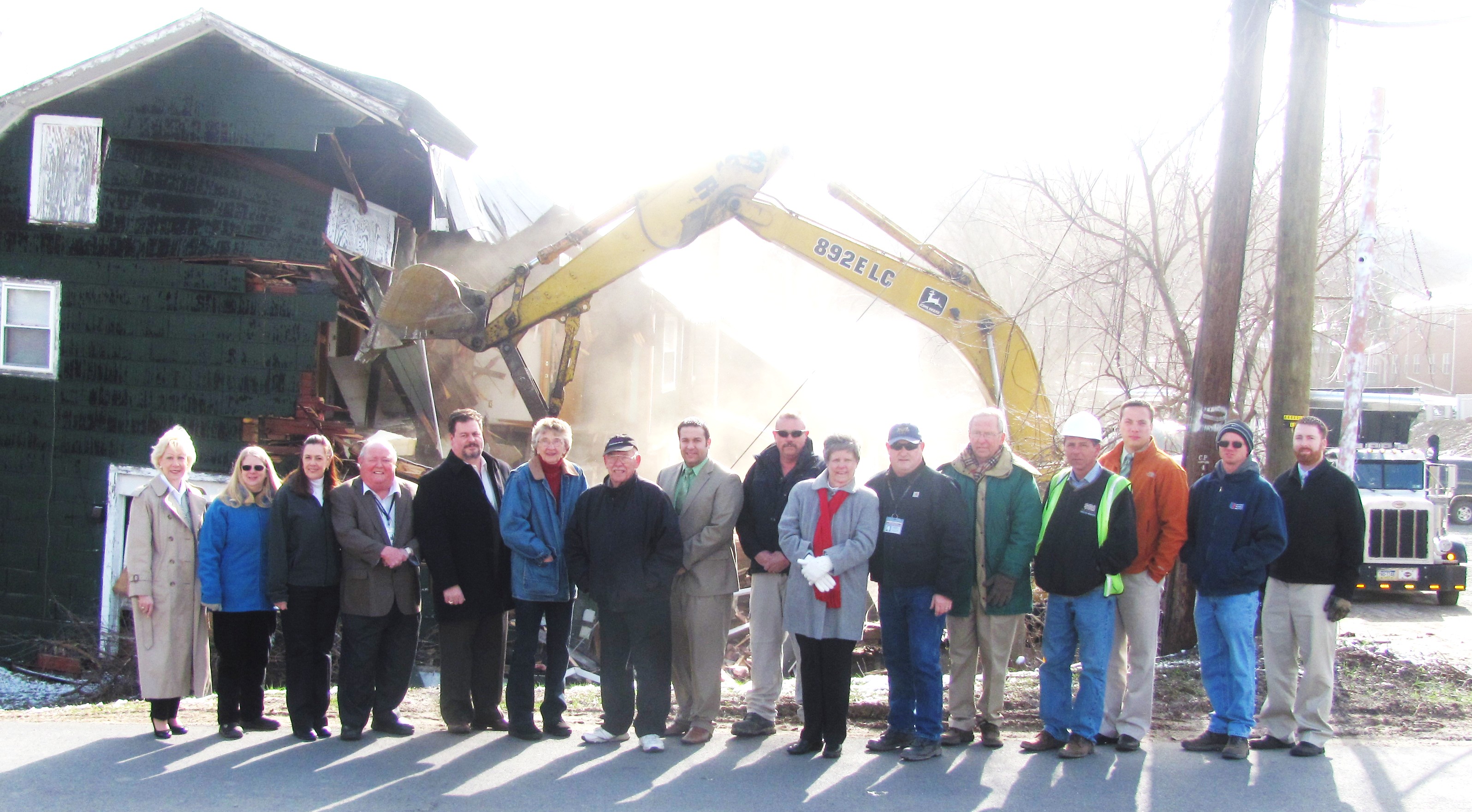 It has taken well over two years and representatives from multiple layers of government to bring plans to fruition to buyout and demolish approximately 40 flood-prone homes in Wyoming County. On April 16, state, county, federal, and local elected officials and other representatives gathered on McCord Street to witness the demolition of a large warehouse that was badly damaged by waters from Swale Brook, Tunkhannock Creek, and the Susquehanna River in 2011.

“It was an opportunity for the representatives of the agencies to see that the demolition of destroyed homes in Wyoming County has begun,” said Wyoming County EMA Director Gene Dziak.

It wasn’t difficult determining which properties were most at-risk for repeated flooding, Dziak explained, and assistance from federal and state disaster funds was available. But the acquisitions were still daunting.

“There have been a whole array of situations that we are dealing with that have lead us to have to buy them out one at a time,” Dziak said, citing second appraisals, liens against properties, and mineral rights contracts signed in recent years as some of the obstacles.

“You have to go through the same process as if you were buying it,” noted Tunkhannock Mayor Norm Ball.

“In other states, when you sell the land, the gas rights go with it,” Dziak related. “Some folks wanted the buyout but wanted to keep their gas rights. The federal government did not know how to deal with that. Federal lawyers are still discussing what direction this will be going.”

Some landowners surrendered their gas leases, which allowed for the buyouts to progress, but the leases are still in limbo because municipalities cannot profit from the property and therefore cannot retain the mineral rights by default.

“FEMA is really struggling with this,” said Dziak. “That slowed us up.”

One of the early catalysts to turning the tide and getting the buyouts moving was the decision by leaders of individual municipalities to let the county take the lead.

Borough officials had already met with owners of flooded homes to get them signed up with FEMA, but Ball agreed that it made sense to follow the county’s plan and avoid unnecessary duplication of applications and fees.

The three county commissioners supported the idea, and Dziak began blazing a more effective trail to state and federal officials and secured the assistance of some key figures.

He credited State Sen. Lisa Baker and Rep. Karen Boback with taking the concerns of Wyoming County to Harrisburg. “They helped us over many hurdles,” Dziak related. “Rep. Boback has helped us in different ways at the state level, and (US) Rep. Lou Barletta came in and kept us on track on the federal side.”

With the support of so many elected officials and the funding in place, county officials solicited the help of CECO Engineering, which conducted bidding for demolition teams – like Smart Recycling of Dunmore – and will handle the projects across the county on behalf of Wyoming County EMA.

Ball concedes that the buyouts resulted in a loss of property taxes that the borough cannot recover. Most importantly, however, he noted, “We no longer have to worry about the people down there being being flooded.” Ball recounted dramatic rescues of residents in previous years from the swift moving waters of Swale Brook and Tunkhannock Creek.

Three of the homes already demolished abutted Swale Brook. One yet to be torn down is on the bank of Tunkhannock Creek. Each of the five properties on the buyout list are situated in what Ball referred to as a “tea cup.”

“Eventually, the water backs from the river into Tunkhannock Creek and back Swale Brook,” He stated. “But you never know where water’s going to go.”

“The municipality has been waiting patiently for this day,” Dziak remarked on Wednesday, “to start bringing these homes down and to clean up the municipalities and get life back to somewhat normal.”

Dziak noted that the properties, once cleared and seeded, can never again be the site of a permanent structure.

“It can only be used for parks and recreation from what I understand,” Ball concurred. “The only thing that we’re going to have to do is mow the grass.”

As for the remaining 31 properties on the list, “We are progressing,” Dziak maintained. “We’re going to continue to progress. We will get those homes bought out and processed.”