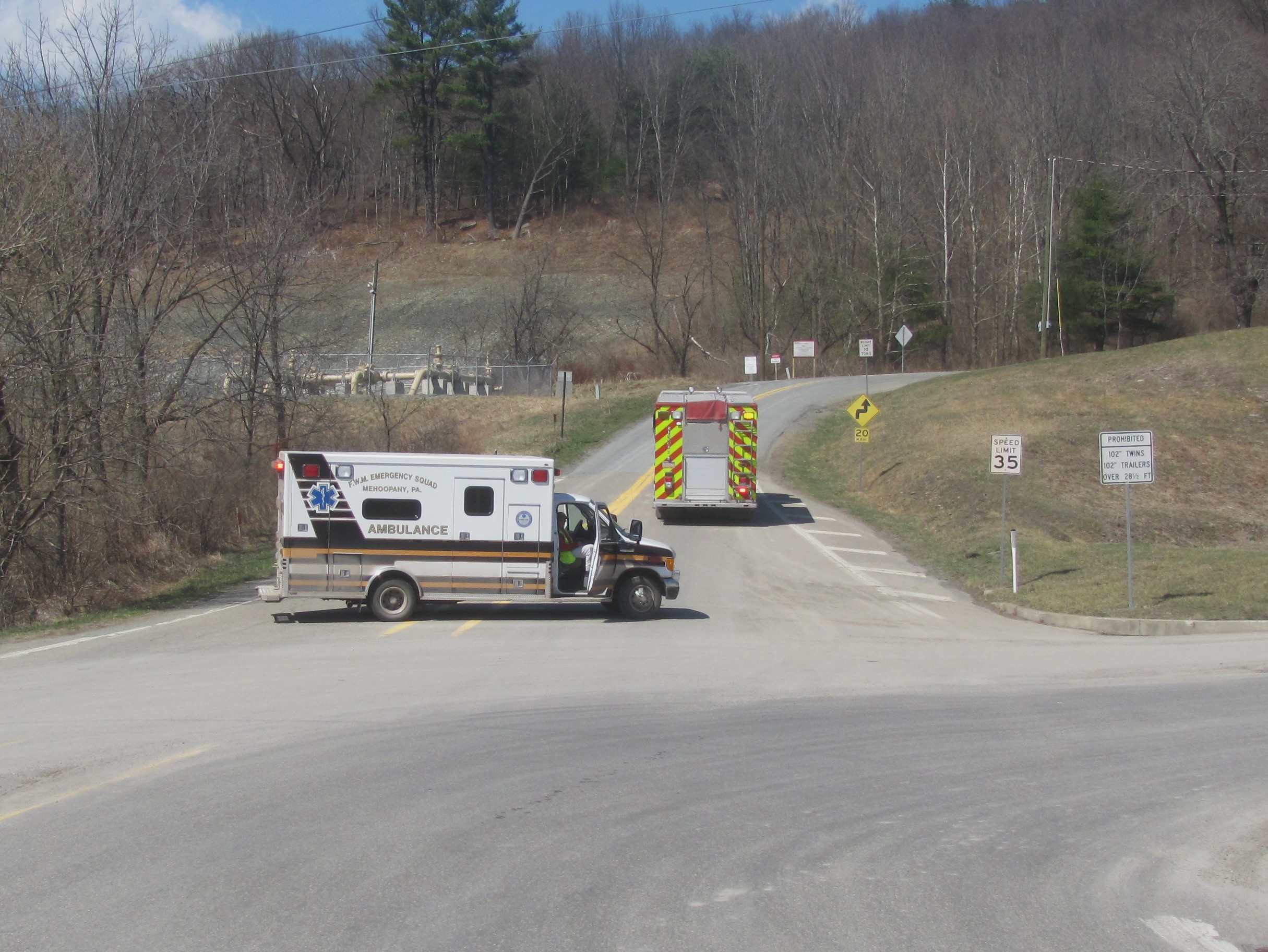 Volunteers from the Meshoppen Fire Company and the FWM Emergency Squad (above) blocked the southern end of Meshopany Ridge Road on Saturday after an unscheduled release of highly pressurized natural gas occurred at the Manning Compressor Station in Washington Township, Wyoming County.

The sudden release of natural gas at the Manning Compressor Station in Washington Township, Wyoming County, on April 12 was a serious situation. But it did not escalate because of the safety systems that have were employed at the plant in the course of its construction.

“It was a scary release,” Wyoming County EMA Director Gene Dziak said in reference to the unscheduled venting of an unspecified amount of gas at the UGI-owned facility on Meshopany Ridge Road. The release is a built-in safeguard that occurs when pressure unexpectedly mounts in the pipeline or the facility.

“The process that is in place when they get something of that nature is that the facility ‘sets in,’” Dziak related. “It’s unfortunate that you get a situation like that to happen, but the vulnerability to the public is reduced dramatically because of the safety systems put into place.”

The anomaly prompted an LEL (lower explosive limit) alarm to UGI control, and the unit shut down approximately 35 minutes after the initial release. “It was brought under control very quickly,” Dziak stated.

Some nearby residents reported hearing an explosion at the onset of the incident, and Dziak confirmed that some of those living closest to the compressor station chose to “self-evacuate for a short period.”

Dziak was especially impressed by the effectiveness of local emergency responders, in this case the Meshoppen Fire and Police Departments and Mehoopany Ambulance.

The local emergency management services organizations are responding in a nature that really protects the residents and protects themselves,” he explained. “They shut down roads just so we could get a handle on it. Everything that we’ve learned and everything that people are doing is falling into place. And that’s all for the protection of the people in Wyoming County.”

Colleen Connolly, DEP’s regional Community Relations Coordinator, noted, “One of our Emergency Response Team members went out on Saturday to investigate with Wyoming County EMA, and it appears that all systems worked properly during the incident.” DEP willl further confer with UGI, she added.

The event also caught the attention of C.O.G.E.N.T. (Connection for Oil Gas & Environment in the Northern Tier). Co-founder Emily Krafjack offered the following preface before sharing a link to the only story published about the incident. She suggested that residents of Washington Township are better protected in such cases because the municipality has zoning in place.

“Certain mechanisms are in place to ensure the township has the information they want and need and, further, that information is provided to their residents as well. UGI – the station owner – meets with nearby emergency responders to keep them aware of the station operations.”

Unlike many other gathering line operators, UGI adds an odor to the gas at the Manning Compressor Station, which is why area residents and first responders could smell it. This safety feature is not required by law.

“The industry is here. It’s not going away,” said Dziak. “Knowing that the systems that they built into this thing are working is a refreshing.”

Ideally, nobody wants to see parts malfunction, but it’s understandable that residents are alarmed by the sound of venting gas, he noted.

“When they go beyond nuisance to safety levels,” Krafjack related in an email, “that is when we really need to be concerned with adequate response and regulations.”

A local firefighter, who asked not be identified, added dryly, “Until you see a fireball…you have nothing to worry about.”

A UGI official told Dziak that the compromised unit will stay out of service until the company’s inspectors are “100 percent sure that it’s ready to be brought back on line.”