In: Patriots Cove
With: 0 Comments 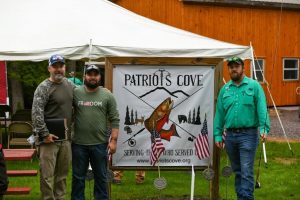 The annual Fish For the Fallen tournament held on May 27 at Patriots Cove in Wyoming County was a fitting start to Memorial Day Weekend as seven teams of two anglers each cast their lines into Beaver Run in memory of military personnel and a state trooper who had been killed in action serving their country and communities. Patriots Cove provides recreational opportunities and retreats for veterans and first responders who live with PTSD and other injuries and for their families.

Lodging, meeting and office space, flower beds and miles of trails are the result of thousands of volunteer hours by individuals and those representing companies and corporations. Sponsors of teams this year in the order that they finished were Dominics Equipment, Williams Companies, Coterra Energy, Fehlinger Construction Group, Meshoppen Stone, Earth Armor, and Quality Collision. Their monetary support helps with Patriots Cove’s operating costs, and most also send employees to participate in the tournament. 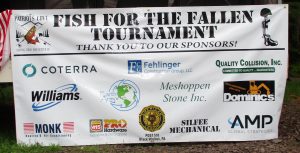 In addition to aesthetics, the quality of the stream has been constantly improved over the last decade and now supports a healthy school of native brook trout and those stocked by the Pennsylvania Fish & Boat Commission. Numerous other organizations and agencies have stepped up to make Patriots Cove the gem that it is.

“This event is so incredibly special because it brings together great local companies who are all spending a day on the water to support an amazing cause. This event is a vital component of the mission to serve those who have served,” said Chad Johnson of Williams, who noted that, by luck of the draw, he guided the team representing Williams. 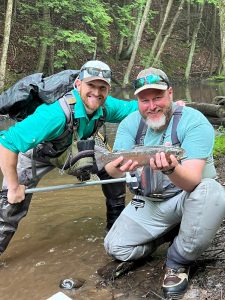 In fact, the top three teams all had direct ties to the natural gas industry, with John Pittenger of Williams mentoring (above, left) the Dominics team of Bobby Sorber and Matt Isaac (above right); Johnson mentoring the Williams team of Mark Ivey and Keith Carroll; and Keith Lutz mentoring Coterra’s team of Ed Kozlowski and Chad Gorman. Williams employee Dale Gow fished on the Earth Armor team. Other teams were a combination of veterans, company representatives, and regular volunteers.

The service of honorees spanned from World War I to the war in Afghanistan. Trooper Joseph Sepp, Jr., the sole law enforcement officer recognized at this event, was fatally wounded at the end of a high-speed chase in Cambria County in 2002. Patriots Cove staff worked the day in honor of Korean War nurse Constance Esposito, who had been killed in 1950. The winning team from Dominics Equipment fished in honor of Army 1Lt. Donald Robert Colblazier, who was killed in action in Vietnam in 1970 and interred at Homets Cemetery near Wyalusing.

Each team was allowed to measure two fish each at each of five stations – or beats – along the stream. The mentors for each team carry with them the biographies of the honorees and reads something different about them at each stop. Participants endured some pretty heavy rain showers in the morning and through their lunch break, but the clouds parted and the sun came out as they wrapped up their afternoon.

At lunch time, local civic leaders, a color guard contingent, and a trio resembling the Andrews Sisters conducted a ceremony to remember those who had passed away and to share the significance of Patriots Cove. Despite the rain, facility co-founder Jeff Swire said that the outpouring of support from companies like Williams and Coterra is highlighted by the smiles on the faces of tournament participants, many of whom are just getting to know Patriots Cove.

“For them to spend a day here and see the level of care that we provide in this beautiful place is a miracle,” he stated. “Quite often, they will visit us again, which is a blessing beyond a blessing.”

“It was an incredible day supporting a great organization,” Johnson remarked. “This single event provides vital financial support for Patriots Cove to continue providing outdoor opportunities, including fishing and hunting for our veterans and first responders.”

Regardless of where the teams end up in the ranking, participants agree that the event is a win-win for everyone. Lutz, Johnson noted, participated last year for the first time fishing on a team. “He fell in love with the Cove and has since become a regular volunteer and ongoing mentor.”

The ongoing success of Fish For the Fallen has led to organizers putting a second fishing tournament on the schedule for October that will focus on first responders and law enforcement officials. “This way, we can honor more people,” Swire remarked. “And, with fall foliage at its peak, the Cove will be breathtaking.” 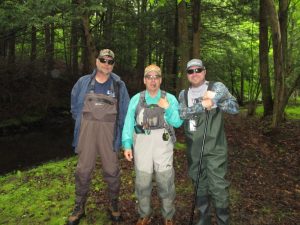 Coterra was represented at Fish For the Fallen by (from left) Ed Kozlowski, Keith Lutz (guide), and Chad Gorman. They fished in memory of Frank Glowiak, a soldier who died in Vietnam in 1966.

Mark Ivey of Williams lands a nice trout at the Fish For the Fallen tournament. 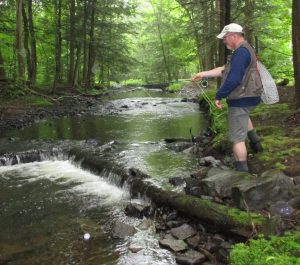 Mike Lopatka of the Fehlinger team tries his luck at fly fishing in Beaver Run at Patriots Cove. 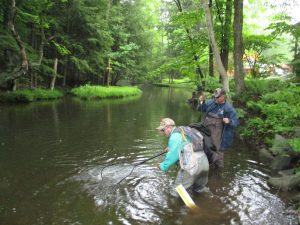 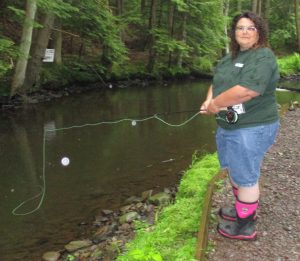 Kari Spencer of Noxen is a regular volunteer at Patriots Cove. 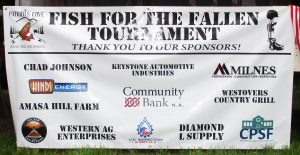