Members of the United Fire Company in Montrose (above) in their dress blues just prior to the recent Memorial Day parade. United Fire Company’s station on Monument Ave (below) was added onto the former Jessup Mansion, which was purchased in 1955 and has become home to an extensive collection of firefighting memorabilia that spans the company’s 175-year history. 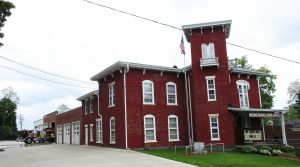 United Fire Company in Montrose will host a 175th anniversary celebration in and around their station at 72 Monument Street on Saturday, June 18. Family-friendly activities will begin at 4 pm, and the first big firemen’s parade in several decades will begin at 6:30 pm. Members of the area’s longest serving fire company want to showcase their apparatus and rich history and increase awareness of opportunities for volunteerism at numerous levels.

“The intent of it is to celebrate having been here for so long,” said Charles Daly, who joined the company as a junior member 36 years ago and is now assistant chief and a trustee. “You don’t find many departments our age.”

United is a conglomeration of three fire companies, all of which got their start in the 1800s: Montrose Rough & Ready in 1847, Montrose Engine #2 in 1855, and Montrose Hook & Ladder in 1880. They merged into United Fire Company in 1921 and moved to their current location in 1955.

Edward C. Fordham was the first fire chief, starting a long line of dedicated leaders through current chief, Preston Sprout, who has been at the helm for 27 years. There are currently about 55 members on the roles, including officers and life members – those who have been with the company 25 years or more. Current officers include president Ben Curley, secretary Alyssa Sprout-Brace, treasurer Mary Rosengrant, and assistant secretary Lindsay Daly. Ryan Cody serves as Captain.

United is fortunate to be able to draw 25 to 30 members for a major incident, according to lieutenant and trustee Dillan VanNostrand, who joined 10 years ago at the age of 20. Service to the community for him is hereditary, as his father, A.J., was a member of the Montrose Minute Men emergency rescue service, and his grandfather, Alphonse, was a detective on Long Island before serving as a police officer in Montrose.

Daly’s firefighting roots run both deep and wide. “Pretty much my whole family has done it,” he explained. His father and grandfather, both names Charles, were firefighters. Both of his brothers were at one time members of United, as are his sister, two daughters, a cousin and an uncle. Daly takes the family affair in stride, noting that many fire companies have become second homes to extended families.

Though John Short’s firefighting family tree isn’t as extensive, he too was inspired by longtime members. “When I was a little kid, I used to come up here and watch the trucks respond,” he related. “I always wanted to ride on them and help people.” After joining the department as a junior 14 years ago and getting that opportunity, he said, “It feels good.”

Collectively, each of the firefighters interviewed have seen big changes through the years, some of which have made their jobs easier and safer and others that have created challenges. Short cited larger trucks that have capacity for more gear. Daly pointed to enhanced technologies, including thermal imaging cameras. “Who would have ever thought that we’d be able to see inside a smoke-filled building?” he remarked.

“Or into a wall so that you don’t have to cut it open,” VanNostrand said of the lifesaving apparatus. He sees the biggest change over the years in the number of calls that United runs, covering a rather large territory as first- and second-responders. United averages a call a day, which can come in clusters followed by relative calm.

Many people don’t realize, the men agreed, the variety of calls that they receive. In addition to fires, they routinely respond to reports of trees covering roadways, flooding, and even the occasional cow in the road. “When someone calls 911, and they don’t know who to send, they send the fire company,” VanNostrand explained.

Though United has fared better than some at maintaining its force, the company still faces challenges of recruiting and keeping new members. Junior enrollment is fairly brisk, but many of the junior members go off to college and don’t come back. The Membership Committee still visits schools to conduct presentations designed to bring youths as young as 14 on board.

While there are restrictions as to what they are permitted to do before the age of 18, VanNostrand said, “There’s a large amount of stuff that juniors can do before, during and after a fire.” There’s always cleaning and light maintenance to do at the firehouse. At a fire, they can pull hose lines and assist with water withdrawal. When the crew returns to the firehouse, everything needs to be cleaned and put back in order. Juniors also receive and help with a lot of training exercises, which is one of their most enjoyable activities. 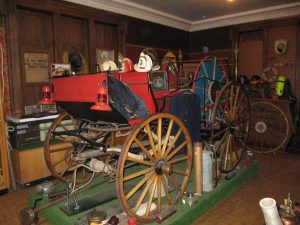 On June 18, the doors of the vehicle bays will be wide open, as will the doors to the fire company’s museum, an unsung and underutilized treasure trove of memorabilia housed in the former Jessup Mansion, the original owner having served as a county judge. In addition to historical apparatus that depict the steady evolution of firefighting equipment over the centuries, there are numerous group photos of members from days gone by. It’s hard not to wonder how some of the larger apparatus were moved into place. 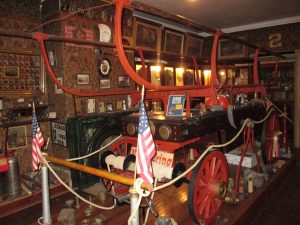 Oddities include a piece of an American flag under which Abraham Lincoln’s casket was drawn by horse and carriage on a national tour that followed the president’s assassination in 1865. Another storied piece is a cane hand-carved by former Civil War prisoner of war Hyde Crocker. The jury is still out as to whether the wood came from the Gettysburg Battlefield, where Crocker is known to have fought, or the county’s first courthouse as one document suggests. But it bares the names of all of the men in Crocker’s military regiment long before he became a railroad conductor on the narrow-gauge line from Montrose to Tunkhannock.

“That’s my favorite thing about the museum,” VanNostrand maintained. “We learn something new every time we come in here.”

Daly agreed, noting that current members are often surprised by pieces that they had not seen before. As for what visiting youths find most interesting, he said, “The kids are enthralled by everything.”

In addition to the tours, the United Fire Company anniversary will offer games for children, instant bingo, a Big 6 wheel, a cornhole tournament, a live DJ, and food and drinks by local vendors.