At the June 7 meeting of the Wyoming County Commissioners, it was reported that 27 of 67 inmates currently sentenced to prison in the county are being kept in other facilities due primarily to staffing shortages at the jail in Tunkhannock. Although the county has received four employment applications since a meeting two weeks ago when the situation was revealed, only one applicant had the experience to go directly to work.

“It’s costing us a small fortune,” commissioner Tom Henry remarked. At 75 dollars per inmate per day, the county is spending more than $14,000 per week until staffing is up to par. Another issue is that new intakes still have to be quarantined because of the ongoing threat of Covid, which takes up space that could be used to house more prisoners.

At the May 24 meeting, the commissioners announced that both sign-on and retention bonuses of $2,000 per corrections officer were being issued to attract and keep employees. At a recent meeting of the Criminal Justice and Advisory Board, county district attorney Joe Peters discussed with committee members some new ideas to facilitate the release of low-level, non-violent offenders.

In other prison news, the commissioners unanimously agreed to start working with Triguard to assess the antiquated alarm system at the jail in Tunkhannock and replace it. The estimated $63,000 cost will be covered with Act 13 funds, which can be used for public safety.

Financial aid has been made available to people living in the Tioga Terrace Apartments in Tunkhannock, and 19 residents have applied so far for CEO rental assistance. While each applicant will receive a different amount based on their respective incomes, the commissioners are hopeful that it will buy most of them some time to make other living arrangements in the face of a dramatic increase in their rent there. Commissioner Ernie King said that the new owners of the complex have been very cooperative.

Luzerne and Wyoming County Mental Health and Disabilities Services (MHDS) executive director Tara Fox was on hand to help the commissioners welcome new county human services director John Alunni, who started work on May 31. Alunni previously served as acting director of Children & Youth in Luzerne County, which will be among his duties here. 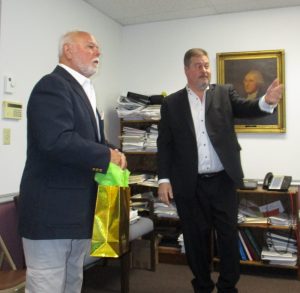 Commissioner Henry took a few minutes to publicly thank Carl Charnetski (above, left), who is retiring after many years of service to MHDS. Henry, who has served on the MHDS board for about a decade, expressed his gratitude for Charnetski’s guidance. “You are reserved and quiet,” Henry said to Charnetski, “but your message is powerful.” In response, Charnetski wished Henry and Fox “continued excellence in service.”

Fox also provided information about a planned distribution of 200 meals to those in need in the county on Saturday, June 28. The program was developed and is administered by Fork Over Love, a non-profit organization that purchases meals from local restaurants and then gives them away at a drive-through distribution point. MHDS does not oversee the program, which was started during the pandemic, but assists in whatever way possible.

Over the past month, 400 meals were given away in both Hazleton and Wilkes-Barre in recognition of Mental Health Awareness Month, and Fox said that she is thrilled to see the initiative come to Wyoming County. Details are still being finalized and, Fox added, “If it goes well, we’d like to do it again in September for Suicide Awareness Month.” Information about MHDS resources will be available at both events.

The commissioners provided information to the media about the return of the PA Department of Agriculture Senior Farmers’ Market Nutrition Program. Those 60 and over can submit an application at any Active Adult Center or online at www.agriculture.pa.gov/Food/food_assistance/. Food vouchers will be made available to seniors that can then be used at local farmers markets, which also have to be registered. The income guideline is $25,142 for a single-person household and $33,874 for a two-person household.

The commissioners made a motion to donate $1,000 to Meshoppen Cat Rescue that was approved unanimously. Commissioner Henry said that the Rescue has been extremely helpful to the county through the years whenever there has been a crisis involving cats – most recently finding suitable shelter for as many as 40 cats taken from a home in the Lake Winola area. “They have tirelessly helped us,” Henry related, “And they don’t have room for them. They will have to rent places for them to go.”

The commissioners plan to attend a dual birthday party on Friday at the Tunkhannock Active Adult Center for “Queenie” Ciprich and “BB” Colodny. Ciprich will turn 100 that day, and Colodny turned 100 in April. Commissioners Rick Wilbur and Ernie King read proclamations in their honor.

The recent hiring of Ralph Schwartz as the new county EMA director was announced, though Schwartz was unable to attend the meeting.

After two months of no reported drug overdoses in Wyoming County, commissioner Henry noted that four overdoses were reported in May, as well as six suicide attempts, one of the latter resulting in a fatality.

Talks between the administration of Tyler Memorial Hospital and potential buyers continue. Commissioner Wilbur declined to provide any additional information, saying that he did not want to jeopardize the progress.