Wyoming County residents have been watching local artist Bob Lizza install a new mural on the north face of the Dietrich Theater building (above) in Tunkhannock that will look like this when it is completed. The Riverside Cemetery Association in Towanda is making progress on turning the oldest public burial ground in Bradford County into a respectful, historical destination. The next phase will be the installation of 25 plaques like this (below) to denote the interment of military veterans.

A packed agenda led to an extended annual meeting of the board and members of the Endless Mountains Heritage Region (EMHR). On Oct. 1, representatives of 12 organizations that had received DCNR funding through the EMHR’s Partnership Mini-Grants Program provided progress reports to virtual meeting participants. Some projects are still in the planning and development stages, while others are completed and can already be enjoyed by the public.

In the spring, the EMHR allotted $65,000 to non-profit organizations like Rail-Trail Council of Northeastern Pennsylvania, The Troy Lions Club Foundation, and the Wyoming County Cultural Center. Two municipalities – Oakland Borough in Susquehanna County and Sayre in Bradford County were also among the winners. The grants required a 100% match so, as EMHR executive director Cain Chamberlin noted, the net result is that more than $130,000 was spent on improvements in local communities.

Among the projects that have been completed are enhancements to the D&H Rail Trail from Union Dale to Herrick Township, new lighting along a walking path from downtown Troy to Alparon Park, more completed sections of the Diahoga Trail between the boroughs of Sayre and Athens, and exterior rehabilitation of the Wyalusing Valley Museum Annex and a former hotel in Leroy that will serve as the Leroy Heritage Society’s new museum. 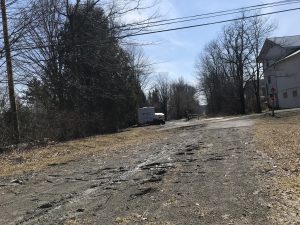 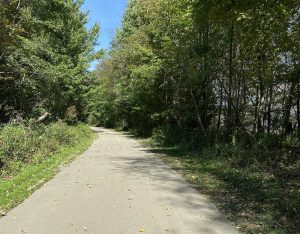 Lynn Conrad of the Rail-Trail Council explained that the surface of the stretch from Union Dale to Herrick Center had not been improved since it opened in 2006. Parts of it (above, left) had suffered significant deterioration, and grass had overtaken other sections. A smooth roadbed is now suitable for hiking, biking and equestrian use. The D&H Rail-Trail also celebrated 2021 as the Pennsylvania Trail of the Year a year after being nominated by the EMHR. 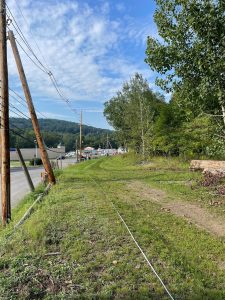 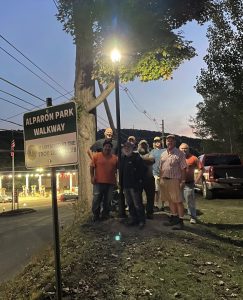 Use of a trail that loosely parallels Route 6 in Troy grew steadily since it was first constructed in the 1970s, but the pathway (above, left) suffered extensive damage from consecutive storms in 2018 that felled trees to which the original lighting had been attached. Addressing both concerns for safety and a desire to make an aesthetic connection to the downtown area, the Troy Lions Club Foundation parlayed an EMHR mini-grant, donated supplies and equipment from local businesses, and hundreds of volunteer hours into a successful relighting project. 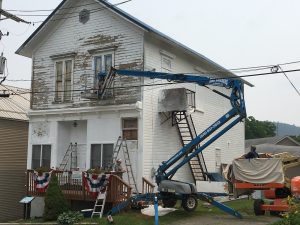 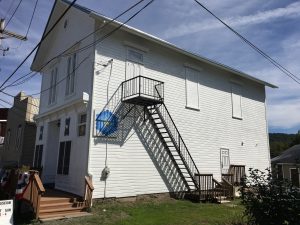 Wyalusing Valley Museum curator Morgan Clinton described the challenges overcome in repainting and replacing rain gutters on the former Masonic and Odd Fellows Hall that will serve as the museum’s research center. The EMHR mini-grant was paired with a Route 6 Façade grant that covered the cost of reconstructing the cornice between the first and second floors. The trickiest part for contractors was working very closely to utilities lines that run along Church Street, but the end result (above, right) is stunning.

Wyoming County Cultural Center director Erica Rogler showed meeting attendees renderings of a new mural that is currently being applied to the north side of the theater building that faces Bridge Street. Previous mural installments, designed by Tunkhannock artist Bob Lizza, depict the Tunkhannock Viaduct (AKA – Nicholson Bridge) as it appeared on postcards from the 1930s. Postcards were also the inspiration for the new mural, which features an aerial view of Vosburg Neck in peak fall foliage with the Susquehanna River winding around it.

Additional projects represented at the meeting included work in Clifford Township Community Park, where a hiking and cycling trail along Tunkhannock Creek was extended and the establishment of a new soccer field, the development of signage for Riverside Cemetery in Towanda that will guide visitors to the burial sites of 25 prominent military veterans, the creation of a scenic overlook in Oakland Borough that will afford residents and visitors views of neighboring Susquehanna Depot,

the production of activity kits for three- to six-year old children participating in the Bradford County Regional Arts Council’s ongoing Young Explorers program, construction of a 15-by-40 foot replica glacier in the Clifford Township Historical Society’s history-based Children’s Garden, and a bicycle- and trail-themed mural in downtown Forest City by an organization called Valley in Motion.

“It was a very competitive process for the grant review committee this year in choosing the projects that would be funded. There were so many great applications, it was very difficult for them to decide,” said Chamberlin. “Each and every one of these projects that have been funded either improves outdoor recreation access in our region, educates our youth, enhances downtown streetscapes, or preserves a piece of our history. We truly love working with all of these heritage partner organizations and couldn’t be happier with their work and the progress of their projects.”

To learn more about the Endless Mountains Heritage Region, including application schedules for various grant opportunities, interested readers can log on to www.EMHeritage.org.