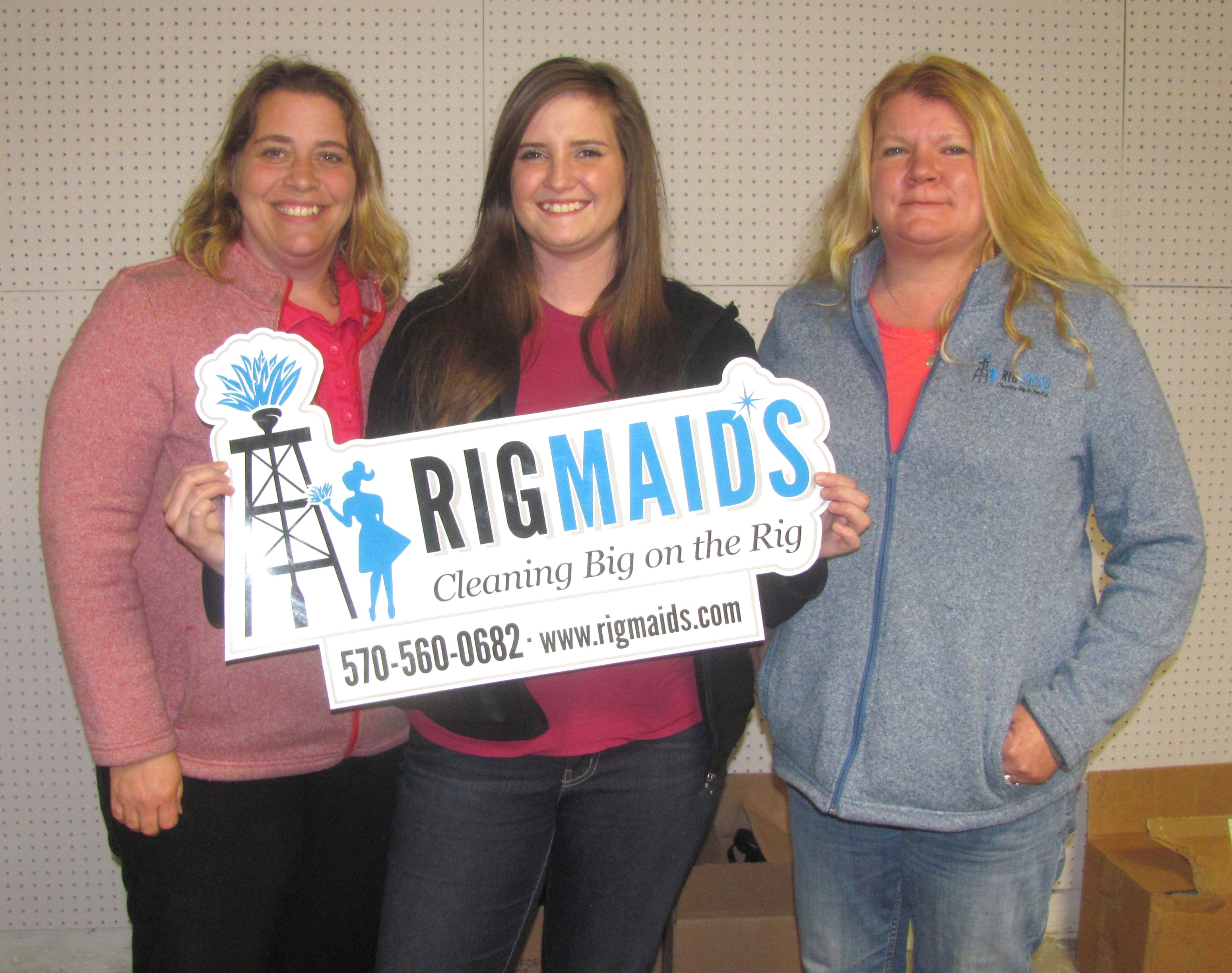 Rigmaids, based in Williamsport with offices in Ohio and West Virginia were indicative of a new, creative level of support businesses for the natural gas industry. They met hundreds of prospective applicants on Wednesday at the Business, Job & Gas Expo held at the Wyoming County Campgrounds.

A vigorous job market along the cusp of the Marcellus shale in Wyoming County continues to spur growth in the area and ensured the success of the Business, Job & Gas Expo at the Kiwanis Fairgrounds near Meshoppen on April 30. According to Wyoming County Chamber of Commerce Executive Director Gina Getts, more than 2,000 people had come through the door by 3 pm. The Chamber presented the Expo along with three local energy powerhouses – Southwestern Energy, Williams, and Cabot Oil & Gas Corporation.

The variety of the 170 vendors showed how almost any sector of the local economy can benefit from a burgeoning industry if its proprietors and managers can create avenues and bridges to the gas industry. Some companies and agencies like Drill Baby Drill were on hand to help make make those connections.

Rigmaids, which provides cleaning services for living quarters and offices leased by gas-related companies operating in Ohio, West Virginia, and in Williamsport, PA was taking applications for people to fill local positions. Catering the Wright Way of Laceyville sets up and serves food at functions big and small for gas and pipeline companies.

Construction outfits and suppliers were well represented as were state and nonprofit agencies geared toward connecting qualified applicants with suitable positions and steering others toward training or resources that would lead them back to the work force.

Getts noted that more than half of the vendors were actively seeking employees. She estimated that some 500 jobs in skilled and unskilled labor were available that day, and the table space allotted to applicants was busy into late afternoon. In lieu of taking applications and resumes, several companies opted to pass out business cards and direct job seekers to their respective websites and application links therein.

“There’s been a lot of activity at our table,” said Shannon Spak of Williams, a midstream company that helps move natural gas from the wellhead to the pipeline. Williams was taking immediate applications for project managers and engineers, and the company will begin filling field positions this summer.

When asked what the driving force or recurring theme of this year’s Expo might be, many vendor representatives resoundingly said “truck drivers” in response.

“If you have a CDL Class A or B license in your pocket, you could go to work tomorrow,” said Pat Hoagland, a local Veterans Employment Representative for Career Link. He was sharing a table and a set of goals with Cully Kolakoski, the regional job developer for the Department of Labor & Industry. He related that one company alone was looking for 230 drivers.

Hoagland was pleased to report that interest in veterans among employers is very high.

Several of the vendor representatives, whose companies are not currently hiring, suggested that the Chamber’s annual Expo is as much a networking opportunity as it is a place to find a job.

“We are here to walk around and see the businesses we known and learn what they need,” said Beth Bevan of Taylor Rental and BX3 Oilfield Supply. Tunkhannock Store Manager Bob Pavlick added that the Expo and Fairgrounds provided the perfect venue for the company to exhibit its range of services.

The heavy concentration of so many related vendors could be a boon to suppliers, those offering specialized services., and those trying to help others find jobs.  “I’ve talked to more than twenty employers today,” Hoagland remarked. “It would have taken me two months to see that many people otherwise.”

Those who were hiring were pleased with attendance as well. Most who had brought application forms had run out of them. Rigmaids gave away 250 bottles of spray window cleaner with the company’s logo before noon.

Getts was pleased with the participation and the large number of people who came out to the fairgrounds on a cold, damp day. She said that vendors could expect a follow-up survey from the Wyoming County Chamber of Commerce to allow them to share what they liked most about this year’s event and anything that could be done differently.

“We will be looking for feedback on what went well and what can be improved,” she stated.

The application booth staffed by Williams, a key sponsor of the event, was an active site as representatives liked (above, from left) Tammy Bonnice, Mike Atchie, and Shannon Spak answered questions about how the company was evolving and where employees would be needed first.

Many of the 170 vendors who took part in the Expo, like Bob Pablick and Beth Bevan of Taylor Rental and BX3 Oilfield Supply, seized the opportunity to collaborate with business associates at the Expo and display their services to potential customers.