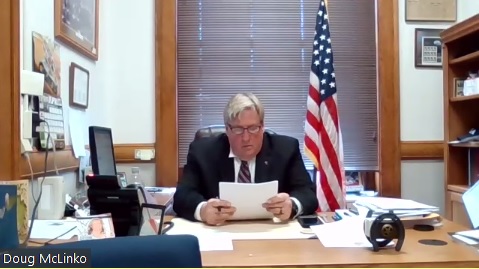 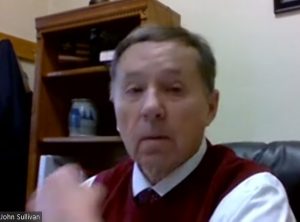 In a story written by Brianne Ostrander and published in the Jan. 8 edition of the Daily Review, Bradford County commissioner Doug McLinko was counted among county residents who went to Washington, D.C. on Jan. 6 to participate in protests against the members of the Electoral College who were there to confirm Joe Biden as the next president of the United States.

McLinko’s comments that the protest that turned violent and resulted in a breach of the Capitol building was “upbeat, happy” and that those who resorted to violence were most likely Antifa co-conspirators did not sit well with fellow Democratic commissioner John Sullivan, who composed an opinion piece distributed to local media titled “The Truth Matters.”

In it, Sullivan attempts to debunk McLinko’s characterization of the event and his notion that the raucus mob seen worldwide on television was led by another group. Just as important to Sullivan was the fact that protesters “from all corners of the United States” stood, shoulder-to-shoulder, unmasked during the ongoing pandemic. Those people returned to Bradford County “and potentially put each other at risk.”

Those expecting tension during the Jan. 14 public meeting of commissioners saw very little to suggest that the long-time commissioners were not getting along as the meeting was conducted virtually with each of the three commissioners in their own offices. McLinko appeared typically disinterested and was the third voice to almost every agenda item and motion, with Sullivan seconding most of them.

Sullivan’s OpEd follows in it entirety:

I would like to respond to the recent article that appeared in the Daily Review on January 8th about the local citizens attending the Washington, D.C. Rally on January 6th.

When Doug McLinko used the words “upbeat and happy” to describe the rally that eventually turned into one of the most tragic days in American history, I was shocked. After watching the horriifc events unfold on television, there were no words to adequately describe my feelings of despair.

Mr. McLinko claims the criminals that invaded our Capitol were undercover operatives for radical, left-leaning terrorist groups, even though his theory is not supported by any credible evidence. That’s like saying the Japanese were not responsible for the bombing of Pearl Harbor!

Like all Americans, the First Amendment protects Mr. McLinko’s right to free speech.

However, he should not use his position as a county leader to suggest that his views, opinions and beliefs reflect those of all Bradford Countians. While he is eager to seize the opportunity to vocalize his views on local television stations, and in the local newspapers, he is not representing the Bradford County Commissioners, and it is irresponsible of him to imply that he is in an official capacity.

Beyond the horror of the destruction, injuries, and death that occurred is another underlying enemy — the COVID virus.

There were thousands of people, shoulder to shoulder, many unmasked, coming from all corners of the United States. What do you think the ramifications of this one event will be on the continuing spread of this deadly virus?

The attendees returned to Bradford County and potentially put others at risk. The current positivity rate in Bradford County is at 15%. This means 15 of every 100 people test positive. From the start, the pandemic has been a partisan issue. While we desperately attempt to keep the spread in check and our communities safe, we have people attending large gatherings disregarding CDC protocols for safety.

We need to listen to the experts and follow the science. Ignoring the guidelines only prolongs our current need for quarantining, and restricts our daily lives. We all have a responsibility to do our part so that we can once again see family and friends, and return to our normal daily routines.

Meanwhile, our frontline medical workers are working tirelessly to keep our citizens safe and healthy. They are truly heroes, putting their own safety in danger to care for those who have contracted COVID.

Nationally, the virus is spiraling out of control, medical facilities are filled to capacity and yet there are those who still believe it is a hoax and refuse to comply with effective safety guidelines.

My four-year-old grandson, Tommy, wears a mask to preschool along with all of his classmates. They know that they are keeping themselves and their friends safe with this simple act. Why can’t some adults have that same mindset?

Another point of contention among our citizens, and a root cause of the tragic events that unfolded at the Capitol Building, is the unsubstantiated claim that the recent presidential election was rigged. Pennsylvania has been front and center in the attack, despite finding no evidence of illegal voting practices.

Mr. McLinko has been especially vocal about the unconstitutionality of Act 77. Ironically, Act 77 passed the PA Senate 30-20, and was unanimously supported by Republicans 28-0. It allowed our Commonwealth to be the 34th state in the Union to offer “no excuse” mail in balloting, so it is hardly a radical practice. It also removed the “straight party” voting option on the ballot, and led to using voting machines that leave a paper trail.

Mr. McLinko was quick to praise the local election proceedings saying he had “the utmost condence in our county’s election office.” I was personally a part of the election process and we followed a set of rules and procedures as did every other county in Pennsylvania.

To say that only counties where Trump won were free of fraud, and those he lost were fraudulent is ridiculous. In many cases, the down ballot Republicans did well. The multiple lawsuits Trump’s campaign brought to the Commonwealth have largely been dismissed due to lack of any credible evidence being presented.

One unsuccessful case was presented before Judge Matthew Brann in Williamsport, Pa. Brann, a former Bradford County resident and one time Chairman of the Republican Party here, dismissed the case for lack of evidence.

As your County Commissioner, I make decisions based on what I feel is best for the citizens of Bradford County. I have no political agenda and work across party lines on a daily basis. While I am disappointed in Mr. McLinko’s actions, and disagree with most of his beliefs, I plan to continue to work with him for the betterment of Bradford County, and show by example how to fulfill my responsibilities with integrity.

I am not naive, and I know many of my constituents are extremely upset with both the results of the election and the effects of the pandemic. Being a patriot means more than waving an American flag. U.S. President Teddy Roosevelt once said, “Patriotism means to stand by the country. It does not mean to stand by the president.”

Let’s get back to treating each other the way we would like to be treated. We are fortunate to live in a community where people look out for one another and are willing to lend a hand in time of need. Let’s do our part to set a better example for our children and grandchildren.