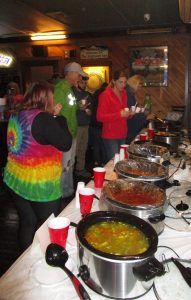 A winter crock-pot cook-off to benefit Meshoppen Cat Rescue (MCR) surpassed the expectations of everyone involved this past weekend. Chefs began arriving at the Highway Inn on Dark Hollow Road shortly after noon on Saturday, and eager soup, stew and chili samplers were not far behind.

Sixteen crock-pot creations lined the tables, as tasters purchased voting tickets in blocks of three, eight and 15. Regardless of how many tickets supporters bought, they were encouraged to sample all 16 entries, which varied from harvest bisque and pasta fagioli to sausage gumbo and venison vegetable tortellini.

Numerous representatives from Meshoppen Cat Rescue, who take care of more than 130 cats at a shelter in Black Walnut, were on hand to talk about pet adoption and the need for monetary and material donations, as well as more volunteers to help care for the felines and socialize them. MCR is a 501-c3 nonprofit organization.

According to MCR president and long-time volunteer Paula Caines, veterinary bills at the shelter alone top $35,000 per year, which includes spay/neuter clinics. The shelter is currently maxed out with cats and kittens, including a number of feral and elderly cats for whom the shelter has become their fur-ever home.

No more cats can be brought in, Cains explained, without upsetting the healthy balance that she and the other volunteers strive to maintain. So adoption is a primary focus of MCR members as warmer weather arrives and more people can visit the shelter. Four young cats brought to the cook-off and kept in an enclosure in an adjacent room made instant friends with those who cuddled them.

Caines spoke to the crowd, many of whom were previously unaware of the shelter and its 15 year history. Rick Hiduk emceed the event, telling the audience that, in addition to raising money, he wanted to provide a party atmosphere for the volunteers who don’t often get to celebrate what they do.

“It was such a great day. We all had a great time,” Caines said afterward.

Fellow MCR member Christi Gacha said that it was the first major fundraiser at which she and the other members didn’t have to do any of the work. “It was so nice to be able to relax with the people and talk about what we do,” Gacha remarked.

Between tasting fees, which ranged from three to 10 dollars, depending on the number of voting tickets purchased; money dropped into several donation buckets; checks delivered on behalf of people who were unable to attend; and the winning chef giving back her cash prize, the total inched ever closer to $900 as the event started to wind down.

That’s when bar owner Jerry Dente (below, right) pledged 25% of the day’s register to the effort, firmly putting the total contribution for the shelter over $1,000. “He is wonderful, kind man,” a tearful Caines (below, left) said of Dente, while also crediting Hiduk and his partner, Mike Houser, for their efforts in preparing for and running the party. “We all noticed the hard work that went into this event and are so grateful for all they did to help our Rescue.” 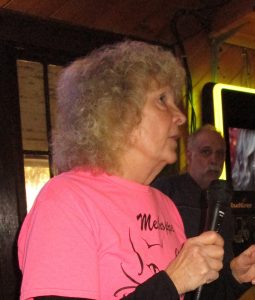 When the voting tickets were tallied, Twyla Caines was awarded the People’s Choice Top Chef trophy for her Bacon Corn Chowder. She gave back her $100 cash prize in acknowledgment of the dedication of her mother-in-law, Paula, and the other MCR volunteers to the cause.

Second- and third-place, respectfully, went to Nancy Siglin for a delightfully snappy chili and Ruth Parks for Piggy Soup with Venison. Nikki Dobranski and Karen Nally rounded out the top five with crocks of Stuffed Pepper soup and Meatball Parmesian soup, respectively.

Additional chefs included Kelly Adams, Marilyn Burton, Hiduk, Houser, Angel Kendall, Karen Russell, and Janis Smurkoski. In addition to the time and materials put into their offerings, each chef paid a $15 fee per crock that served as the prize money. They also purchased voting tickets.

“Many people have cook-offs,” Paula Caines stated. “But to reach out to an organization like ours and involve the community like this shows how much more we can accomplish when we all work together.”

The Meshoppen Cat Rescue shelter is located on Route 6 in Black Walnut. Interested readers can learn more by liking their Facebook page and logging on to www.meshoppencatrescue.com to learn more.