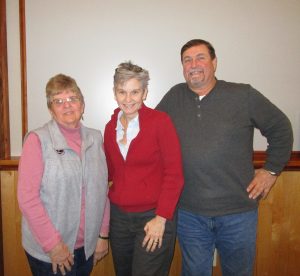 Representing Sullivan County at the February meeting of the Endless Mountains Heritage Region were (above, from left) Barbara Warburton, Donna Iannone and John Krakoski.

Four cycling and hiking events are planned in Sullivan County this year, and board members of the Endless Mountains Heritage Region (EMHR) were apprised of more details at their February meeting held at the PA DCNR District Office near Dushore. Those in attendance also got an update on the new interactive heritage map that will soon be accessible on computers and mobile devices.

Additionally, Iannone shared information about the first ever Tour DuShore, a gravel bike cycling event planned for Saturday, Aug. 8. The course from Dushore to Eagles Mere and back involves 50 miles and 5,000 feet of climbing. 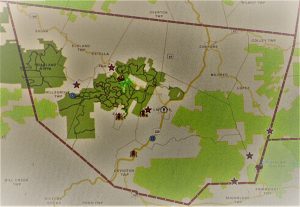 “We’re getting good exposure among people who love these extreme sports,” Iannone remarked. “We have a lot of dirt roads. We might as well use them.”

Warburton, who also serves as president of the Bradford-Sullivan County Farm Bureau, told board members of that agency’s intent to bring a mobile agriculture education and science lab to local schools. The Farm Bureau is seeking sponsors to help cover the $2,500 cost for each visit, and EMHR board members expressed an interest in supporting the endeavor as part of the EMHR’s ag initiatives for the coming year.

Warburton related that officials from the Canton and Sullivan County school districts have already expressed a desire to host the mobile lab, which can accommodate six to eight classes per day and modify the lessons for different age groups.

Krakoski reported that plans for a viable trail through PA Game Commission property remains in limbo while he and Iannone work with officials to iron out some more details, including the need to acquire at least a quarter acre of private land for overnight camping. The project was introduced by Sullivan County EMHR members last year as a potential pilot for a trail system that could connect the other three Endless Mountains counties. “We’re not giving up,” said Krakoski. 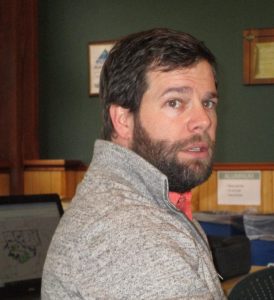 Williams’ staff used a wide variety of mapping sources that were overlaid to create the unique application. The planning commissions from each of the four counties provided information for the project, including 911 addresses, which are considered more reliable than internet map services.

“Some layers can be hidden and allow people to toggle on and off as they need them,” Williams explained. There are also “splash screens” that provide brief tutorials on how to use the maps.

Williams noted that the program is designed to be easily modified to make updates more automatic. “Once we go live and see how it is used, we can make adjustments,” he added. The maps will be accessible within a few weeks on both the EMHR and Bradford County Planning Commission’s respective websites.

According to Chamberlin, other organizations can contact the EMHR for inclusion on the maps. He also recommended that a navigational tool be added to help users plot a trip.

A number of Bradford County representatives were on hand, in addition to Williams, to highlight some events and initiatives there that align with the EMHR’s mission to maintain and enhance the rural character and culture of the Endless Mountains.

Commissioner Ed Bustin related that Bradford County’s summer footraces are garnering greater interest via inclusion on a national race registry and the Bradford County Races Facebook page. Construction of the new 911 Center in North Towanda Township is coming along nicely, and there will be meeting space that the EMHR could access. And a revitalization project is underway in the borough of Sayre.

Warburton noted that she will be traveling with FFA members from Athens, Canton, Troy and Northeast Bradford to a Farmers Care presentation in Pittsburgh on April 16.

Williams reported that the Planning Commission is working with PennDOT to map out a Central Bradford County Trail Network that will highlight historic buildings.

According to EMHR administrative assistant Vanessa Billings-Seiler, the Route 6 Façade initiative, conducted in partnership with the PA Route 6 Alliance, has garnered significant interest based on strong attendance at informational meetings held in Towanda and Tunkhannock.

The next board meeting of the EMHR will be held at the Priesthood Restoration Site in Susquehanna Depot on Wednesday, April 1.