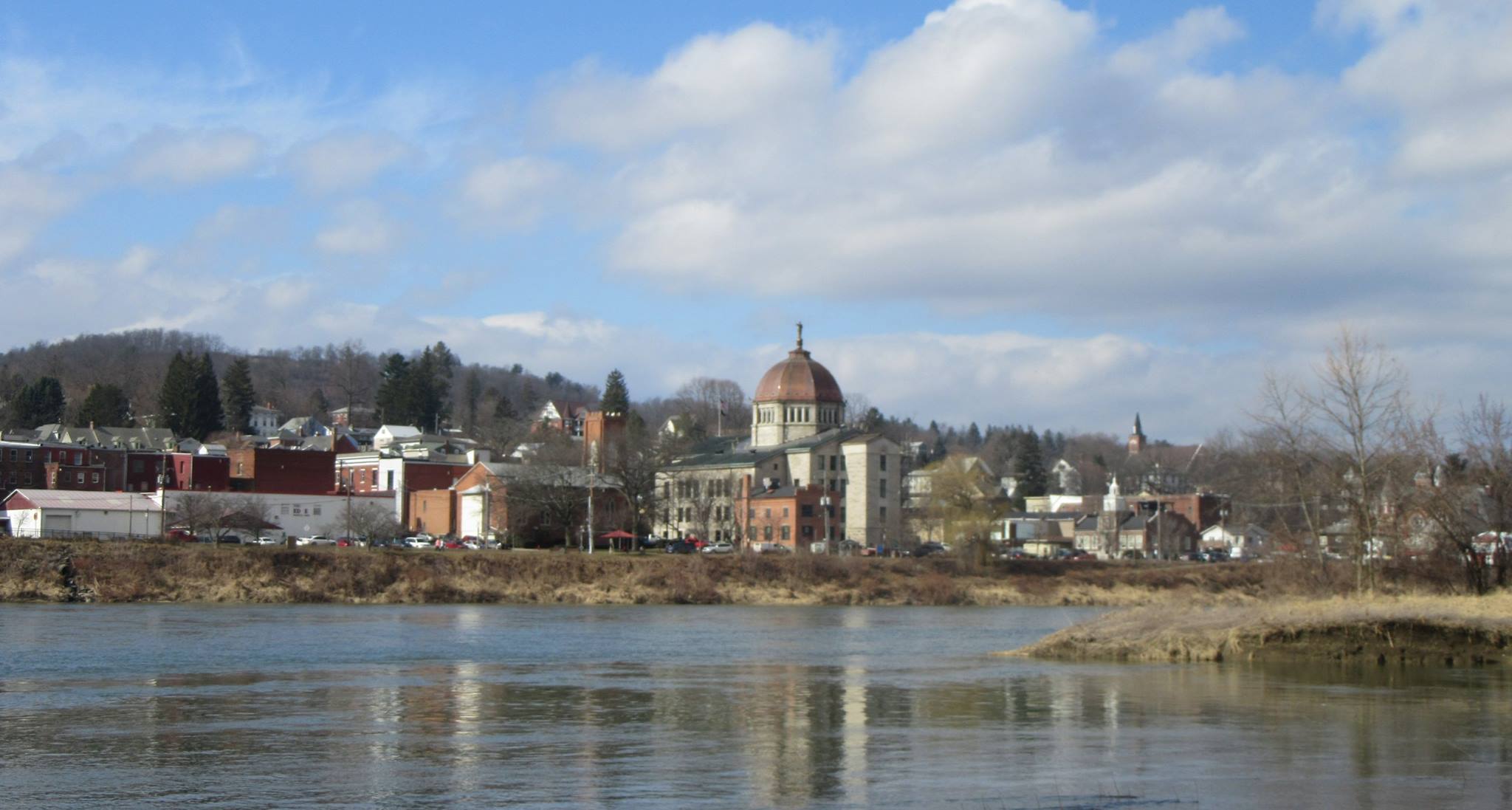 The Bradford County Commissioners covered a lot of ground in their February 23 meeting at the courthouse in Towanda. In addition to welcoming guests who spoke about addiction awareness events, progress at the Troy Sale Barn, and a recent win at the NE Regional Bridge Design Competition, commissioners (above, from right) Ed Bustin, Daryl Miller, and Doug MckLinko rolled out a new plan and partnership with Trehab and new plans for county parks.

Photos and Story By Rick Hidukuk

While some residents of Bradford County have seen themselves for many years as victims of a housing shortage, the Bradford County commissioners have noticed a growing number of abandoned and blighted properties that were not only no longer on the tax rolls but also not providing homes for the families who need them.

When Trehab representatives approached the commissioners last year for a renewal of the standard Homeownership Program that Trehab had started in Bradford County in 1994, they were rebuked.

“You said, ‘No,’” Trehab executive director Dennis Phelps reminded the commissioners, subsequently thanking them for their insight and expressing his satisfaction with a newly modified program that will continue to meet the needs of eligible parties while also contributing to their long-term success as first-time homeowners.

“We felt that we had reached a tipping point,” said McLinko, in reference to the number of new homes being built for low- to medium-income families while unused older homes were littering the landscape.

The commissioners also shared a concern that the services being extended to the families did not require enough of the recipients, therefore leaving them unprepared as new homeowners and not as likely to succeed despite the best intentions of the program.

On Feb. 23, the commissioners unanimously approved a new Homeownership Program and committed $535,000 from the Pennsylvania Housing Affordability and Rehabilitation Fund (PHARE). While the program will still provide assistance for low- to moderate-income families with down payments and/or closing costs, additional funds are now available to help homebuyers with repairs that might be required in order to make an older home livable once again.

“It’s a way to target our aging housing stock and do the renovations that a young couple might not be able to do on their own,” said Commissioner Daryl Miller. The program will we conducted in close association with the USDA office that assists Bradford County.

“This is not a hand-out program,” Commissioner Doug McLinko asserted, noting that guidelines for eligibility includes secure employment and an annual income between $28,850 and $57,000. “We also require ‘sweat equity’ from them. They will be involved in painting and fixing the place up.”

Up to $15,000 per household could be spend to upgrade electrical infrastructure or the heating system or to put a new roof on the house, for example. 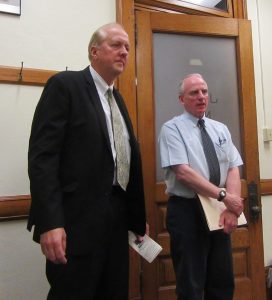 Trehab’ Bradford County housing coordinator Bill Farley (above, right with Phelps) added that the agency will also provide workshops and classes for new homeowners. The goal is to maximize resources to assist county residents, as well as to provide counseling and consultation.

Commissioner Ed Bustin was especially impressed by the educational component of the plan, noting, “When I bought my first home, I had no idea what I was doing.”

The commissioners unanimously approved the 2017 rules and regulations for county parks, of which there are now four. While the board reported little if any changes to the rules or rates, they were happy to announce that camping will be permitted once again at Mt. Pisgah County Park near Troy.

“We are fully committed to opening up Mt. Pisgah Park for rustic camping again,” Bustin stated. Park users will find two designated camping loops with no electricity nor running water. Restroom facilities are available, and a concessionaire will be contracted to manage the camping areas and assist the county sheriff’s department with security.

Bustin related that he used to take his family camping at Mt. Pisgah years ago and always regarded it as one of the most beautiful campsites in America. Mt. Pisgah County Park is adjacent to Mt. Pisgah State Park via roadways and connecting hiking trails.

Camping continues to be available at Sunfish Pond and Larnard-Hornbrook Park, but camping is not yet allowed at Cook’s Pond in Orwell Township, which was adopted into the county park system in October 2016. (Read story here: http://www.endlessmtnlifestyles.com/?p=6184)

Though not on the agenda, a question about the ongoing struggle to get fair payment from natural gas companies for the landowners from whom they lease the wells sparked a lively conversation that was primarily hopeful.

The newest legislation concerning guaranteed royalties is House Bill 557, which is similar to two bills proposed in previous years that were continuously delayed until there was no time left to vote on them before the legislators recessed.

“One difference in this is that it has been put forth earlier in the process,” said Miller. “Because of that, we are hoping that it will gain traction in the House.”

In the meantime, McLinko announced, “We are going to start organizing the commissioners and supervisors in the northeast. The representatives down there (Harrrisburg) don’t know what they’re talking about. It angers me that more of them are not on board.”

One exception, McLinko noted, is Sen. Scott Wagner of York County, who has been in the area several times with Sen. Gene Yaw to get a first-hand look at the situation.

“I’ll be excited and impressed when they vote on the bill, not when they present it,” Bustin remarked. “If you want to convince people that you’re on track, vote for it.”

McLinko finished the meeting with a plea to the media members present to help their audiences distinguish between corporations whose practices are unfair to county residents and the people who work for them. The employees of Chesapeake and Frontier Communications, for example, “are doing the best they can. They are not the problem. Say ‘hello’ to them and thank them for what they are doing. Treat them with respect.”

To read about additional business and acknowledgements at the Feb. 23 Bradford County Commissioners meeting, visit www.endlessmtnlifestyles.com.