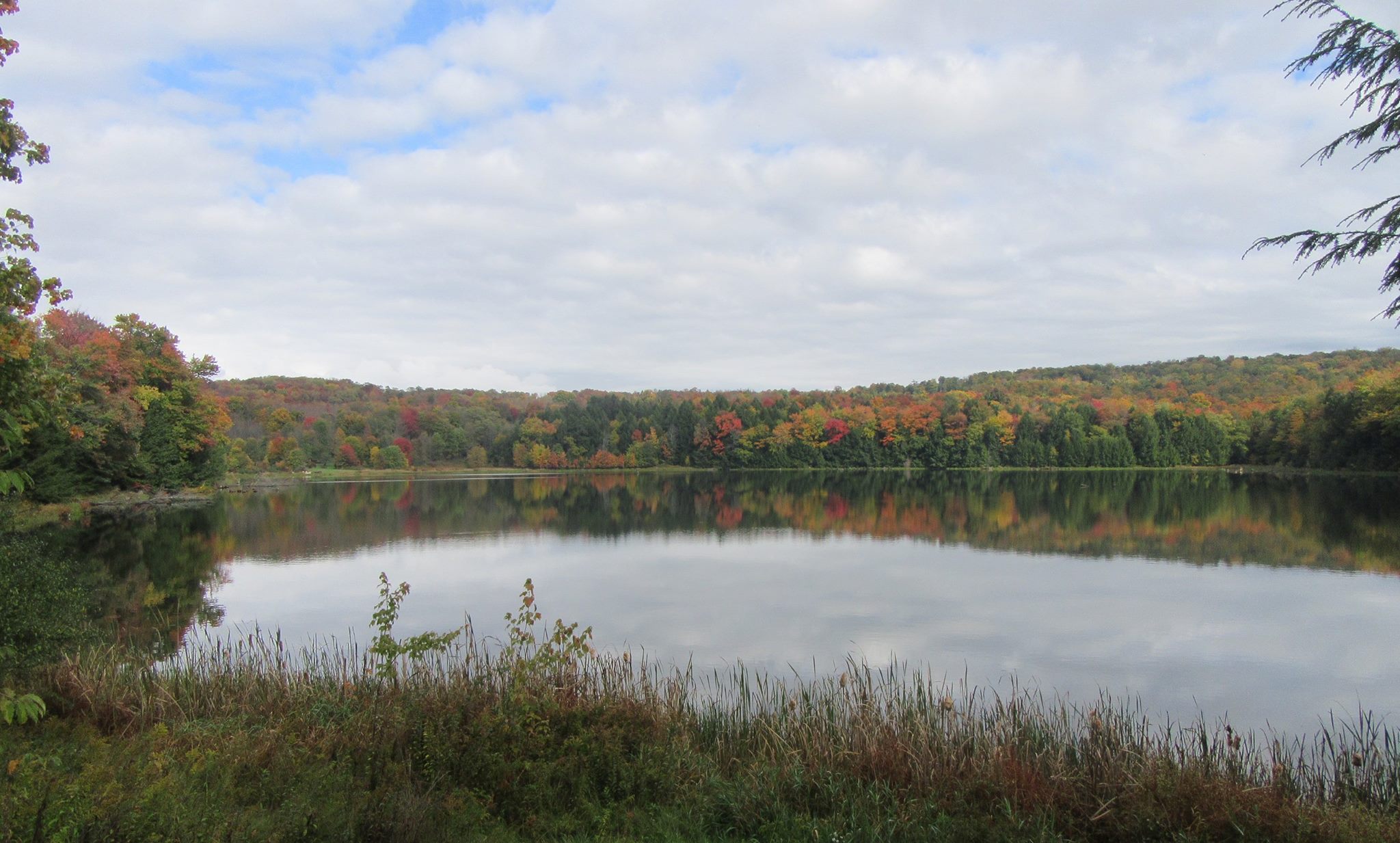 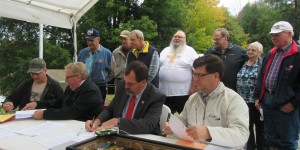 The Bradford County Commissioners held their Oct. 13 public meeting next to Cooks Pond near Potterville in Orwell Township. The primary business at hand was the unanimous agreement by the three commissioners to accept a deed of conveyance from the Cook’s Pond Association. The pond, its dam, and the public access area have now become Bradford County’s fourth county park – the first one in the eastern half of the county.

Members of the Association looked on (above) as the commissioners signed the documents before all gathered together at the base of the flag pole and monument (below) to tell stories about the site. 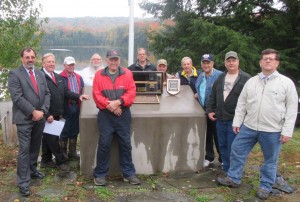 They laughed about the memory of a “choreographed geese flyover” during its dedication in 1997. They recalled taking bets on the day the water would reach the new dam’s spillway.

Commissioner Doug McLinko described the event as a “great day for Bradford County” and the donation of the pond an “unselfish act” for its citizens. “Our parks committee is very excited about it,” McLinko stated. Cooks Pond joins Sunfish Pond, Mt. Pisgah, and Larnard-Hornbrook in the county’s park system.

This deal includes the Association’s the transfer of its remaining assets and mineral rights. The county also adopted the association’s bylaws and park rules, McLinko explained. No campfires nor overnight camping are allowed, for example, and no outboard motors are permitted on boats.

“It doesn’t need anything done to it,” said McLinko. The dam was rebuilt in the late 1990s to DEP specifications and a recent inspection by engineers found it to be in great shape.

Commissioner Daryl Miller remarked that the restoration of the site after DEP had torn down a 150-year old dam was indicative of the spirit of rural Pennsylvanians. “How many places can you go where a group of people would take on a project of this size?”

“This is a group of people who embrace the outdoors,” said Commissioner Ed Bustin, who thanked the Association members for trusting the county with such a treasure. He also invited them to consider serving on the county’s Parks Advisory Board.

The Save Cook’s Pond Association was formed in 1995 by local citizens who had fished in the pond for their entire lives. Within two years, they’d raised enough money for the construction of a new dam, and water breached the new spillway on Jan. 8, 1998. 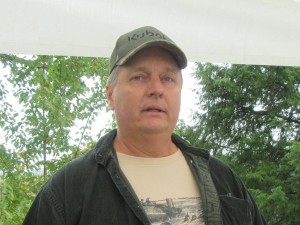 “We did it for the people,” Association president Roger Cook (above) told those in attendance. “Our main concern was that it would be open to the public. Anybody can come here at any time to fish.”

The pond is naturally spring fed and boasts a high quantity of perch, pike, bass, bullheads, and crappies. In fact, Cook noted, the state has deemed it an especially good pond for crappy fishers.

“It’s been a great adventure since day one,” Association director Todd Corbin said of group’s fundraising and restoration efforts.

Cook explained that the members had reached a point where they felt they had done everything that they could do for the park. They have achieved their goal of preserving the site for future generations, but the next generation has not stepped up to maintain the site.

“We could no longer do it,” Cook related. “That’s why we are donating it to the county.”

While county officials consider the possibility of a pavilion and compost-based restroom facilities, Association members are hoping to see as few changes to the site as possible.

“We just want it to be left pristine,” said Cook. He did agree that handicap accessibility should be addressed and trusts the county to take care of it as per regulations that they better understand.