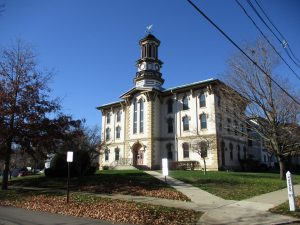 Wyoming County commissioners (top, from left) Tom Henry, Rick Wilbur and Ernie King conducted a public meeting on Nov. 8 and announced that progress on a restored door for the old entrance to the courthouse in Tunkhannock is proceeding as planned.

About a half dozen long-time volunteers from Seneca Trail Park attended Tuesday morning’s public meeting of the Wyoming County Commissioners to get more details on a proposal to form a Wyoming County Park Board. The ordinance, one of two concerning the future of parks in the county that were approved during the meeting, was on the agenda at the previous meeting but was tabled. Also on the Nov. 8 agenda was mention of a steering committee that will be set up separately from the Parks Board to identify needs for which DCED grants might be used.

According to Wyoming County Planner Lynnelle Farber, the steering committee will have between nine and 12 members, including one to three members from the Park Board. Other representatives on the steering committee – a temporary assignment – will include representatives from the PA Fish & Boat Commission, county Conservation District, and the Seneca Nation, and officials from Eaton Township, in which the former Roadside Rest park is located.

“That committee will give input for the future design of the park as part of public input,” Farber related. “For the Master Site Plan, we are following DCNR scope but not using DCNR funds and conducting the plan in-house.”

It was still unclear how the five-member Park Board would be structured or when it would become official. Since, as of this weekend, the park will be closed for the winter months, commissioner Wilbur didn’t acknowledge an urgency in approving board members immediately. But those in attendance, who have not only donated countless hours of their time and materials to the project but have operated in limbo for most of the past year while the county moved to take back the park from Eaton Township, felt differently. They were there to get answers and offered up three names – Linda Coolbaugh, Linda Price, and Dawn Rogers – as potential board members.

Also in attendance was Dr. Gere Reisinger, a Wyoming County resident and Pennsylvania adviser to the Seneca’s Sacred Site Committee. “Will there be any Senecas on the board?” Reisinger asked. “That’s a Seneca site, and it’s sacred to us.”

Wilbur could not say for certain but suggested that Reisinger was on a preliminary list proposed by Farber. While Farber agreed that Reisinger is on the preliminary list of steering committee members, she could not confirm that he would be part of the five-member Park Board. “My understanding is that the commissioners are appointing them under the ordinance they created,” she stated.

Reisinger has been involved in the park project almost since its inception, but he has not always been in lockstep with the other participants. During the period of limbo, signs for the park have been erected and taken down over disagreements of content and design. Reisinger told the commissioners that he has 35 years of experience working on projects such as this – mostly in the Wyoming Valley – and feels strongly that the Seneca Nation should have a seat at the table.
The commissioners also ratified a set of rules of conduct for the park that will be posted on the county’s website, www.wycopa.org. Though the regulations are currently geared toward Seneca Trail Park, the commissioners said that the Park Board is intended to be a long-term solution to dealing with any future parks developed under county authority, as well as any trails that may be created or adopted. One such trail is the Iroquois Trail which, commissioner Tom Henry explained, was developed under an authority that is, for practical purposes, inactive. There is a possibility, he suggested, that the Iroquois Trail could be acquired and fall under the authority of the new Park Board. The Seneca Trail, which runs from the border of Monroe Township along Jenks Road, through Seneca Trail Park, and also through Eatonville is maintained by Eaton Township.

Commissioner Wilbur said that a draft of the county budget for next year is 95 percent complete and should be finished by next week. It will be posted on the county website and advertised by Dec. 7 and approved at the Dec. 29 meeting. There will be no increase in county taxes for residents, he maintained.

The national mid-term election went off without a hitch in Wyoming County with all votes counted and reported by 10 pm. “We had plenty of paper,” Wilbur joked, in reference to a paper shortage in neighboring Luzerne County that prompted officials there to extend voting hours to 10 pm. While there were no big surprises in the unofficial results in largely Republican Wyoming County, Democratic candidates fared better than expected in other parts of the state. Doug Mastriano garnered nearly 60 percent of the popular vote for governor in Wyoming County, over Josh Shapiro, but Shapiro was declared the winner with more than 55 percent of the state vote count. One of the most hotly contested Senate seats in the nation was narrowly won by Democrat John Fetterman, though Republican Mehmet Oz took 62 percent of the Wyoming County vote.

Wyoming County Democrats took to social media in a big way over the past week as they were seeing their candidate’s signs disappear almost as quickly as they were put up. County resident Bonnie deLyon dropped a hand full of broken zip strips on the commissioners’ table that she said were left behind by Republicans cutting large Shapiro signs from their frames. Those that weren’t removed entirely, she noted, were eclipsed by Mastriano signs placed directly in front of them.

“I believe that the Republican Committee needs to take responsibility for this,” deLyon told Wilbur. “We’re supposed to be civil people.”

“Why are you blaming the Republican Committee?” Wilbur responded. “It happened on both sides.”

Commissioner Henry agreed, saying that numerous signs related to his campaigns for commissioner have been stolen over the years and that, when he tried to involve the police, he was told that the perpetrator has to be caught in action to be charged.