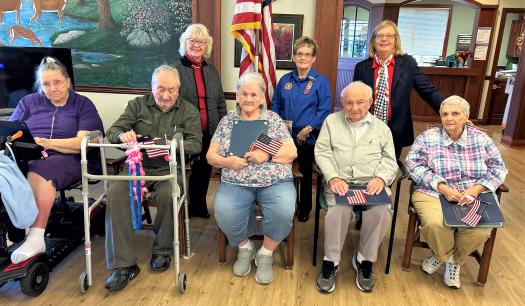 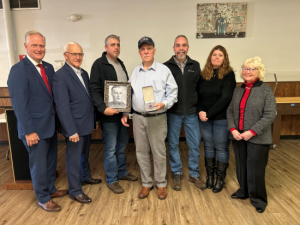 Today, we observe Veterans Day by remembering the sacrifices these brave men and women made on behalf of our citizens and people around the world.

On Thursday, Rep. Tina Pickett, Sen. Gene Yaw, and Congressman Fred Keller attended an event at VFW Post 1536 in Sayre where they met with family members of the late Raymond Varner. Raymond’s service records were lost in a fire nearly 50 years ago but, thanks to Congressman Fred Keller, his military medals, including the Purple Heart and World War I Victory Medal, were presented to his son, Robert. Private Varner was one of only 12 soldiers in his company to come out of the Battle of Argonne alive.

“More than a century after being seriously wounded in World War I, Raymond Varner finally received the recognition he deserves for his service,” Pickett stated in a news release.

Pickett also joined the VFW Post 6824 Auxiliary in presenting a group of veterans at the Towanda Personal Care Home with certificates in recognition of their service to our nation. “We also gave a flag-folding ceremony in which I explained the meaning of each fold,” she related. “In addition, all residents of the home received a small flag and a poppy.”

Veterans Day, originally known as Armistice Day, first marked the one-year anniversary of the end of World War I, on the 11th hour of the 11th day of the 11th month and sought to honor the veterans of the World War – the only world war to have occurred at that time. Armistice Day was declared a national holiday in 1938 to acknowledge world peace, and then was renamed Veterans Day in 1954 to celebrate the contributions of veterans of all wars.
The General Assembly recently adopted a new law, Act 129 of 2022, formerly House Bill 2361, designating June 12 of each year as Women Veterans Day in the Commonwealth. There are currently more than 71,000 female veterans residing in Pennsylvania. And, according to the U.S. Department of Veterans Affairs, by 2040 it is estimated that women will make up roughly 17% of the total veteran population.

A new state law offers military family members the opportunity to obtain a “Blue Star Family” specialty license plate in recognition of their loved one’s service.
Act 112 of 2022, formerly House Bill 1486, requires PennDOT to issue a Blue Star Family license plate to any family member of a person who is an active-duty military service member, including those in the reserve or National Guard. The plate will cost an additional $23 on top of the registration fee. Plates will not have to be returned once the family member no longer serves on active duty. The same law also creates a special plate for Afghanistan and Iraq war veterans. The new plates will become available from PennDOT after the law takes effect next year.