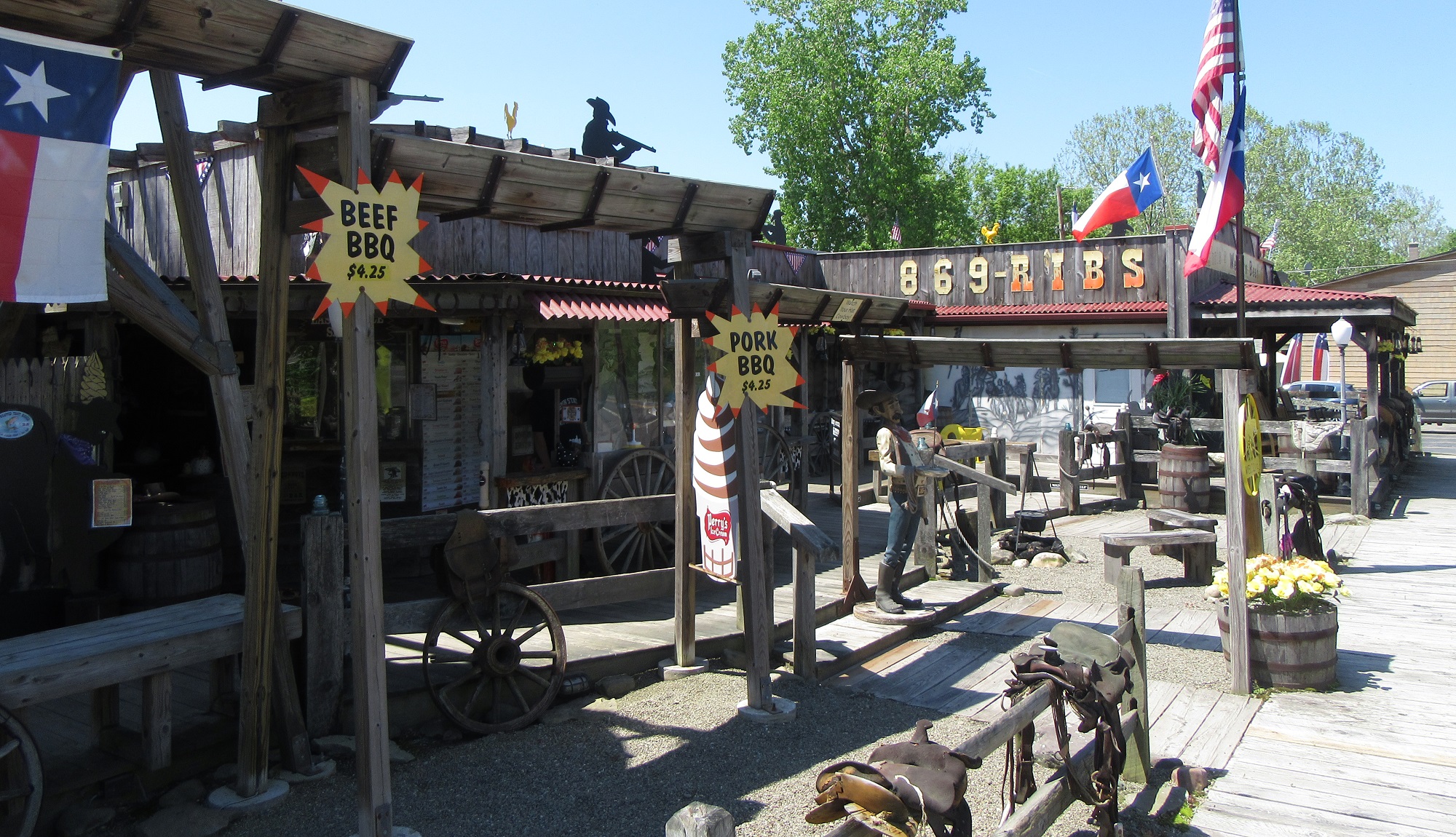 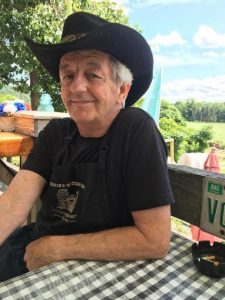 Chris’s Western BBQ on the Black Walnut Flats in Wyoming County has been in existence for less that two decades, but it has already become an icon for local residents and travelers for a number of reasons. First, a faux wild west town popping out of a corn field tends to attract a lot of attention.

The story of the miniature theme park and eatery starts with owner and creator Chris Hanlan (above), a regional rock legend whose penchant for food, decorating, woodworking and fantasy drove him to create a portable, collapsible western saloon in 1990 when he decided to open a food stand at the Wyoming County Fairgrounds. Chris’s Western Beef as it was then called was a huge hit. He lost the original stand in a flood in 1996, but quickly built another one himself. At about the same time, a friend suggested that he purchase the property along Route 6 on which a district magistrate office was located. 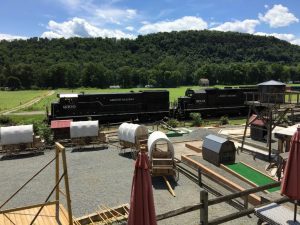 When he took a look at it, Chris immediately envisioned the deck that now looks out across farm fields (above) toward the Susquehanna River. He erected a wood shop on site and started adding porches, fences, and boardwalks to the magistrate building. In the dark of night, he recalls, Chris and a couple of friends clandestinely towed his food stand out of the fairgrounds. They had to shave a little bit off the top of it to get it to fit under utility wires, but slid it into it’s current location as the core of his new outdoor restaurant. 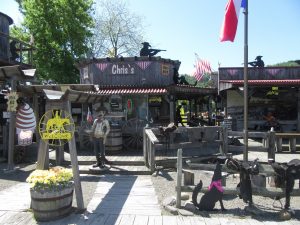 The general theme of western barbecue was evident from the start, but then Chris, who admits that his Kingston, PA family always went all out for Christmas, started adorning the walls with more wild west motifs and cutout figures, animal pelts, and license plates.

“I always thought if you build something really unique, people will come and love it,” he explains. “I started watching western movies to get ideas. And I went to Disney World and looked at their Frontierworld.”

Part of the collection is a direct result of his years at the fair, when he fed many of the musical acts who performed there. More than a few of them – mostly country artists – were so impressed with Chris’s food and flair that they presented him with dozens of autographed photos. His friends suggested that he put them on the walls.

“I didn’t know what to do with them at first. I think I threw a couple of them away,” Chris recalls. “I wasn’t really into country music. I’m a rock’n’roller.” 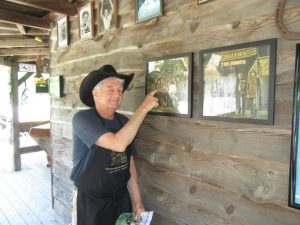 Chris was one of five members of the Buoys, a pop/rock band from Wilkes-Barre who had a surprise national hit in 1970 with “Timothy.” Though certainly catchy, the song drew the ire of radio sensors when the realized that it was a tongue-in-cheek reference to cannibalism. The Buoys were recorded by Scepter Records, which primarily released gospel music.

“They didn’t know how to promote a rock act,” Chris maintains. While the band was still playing gigs in bars in the Scranton/Wilkes-Barre area, “Our song was number one on WLS is Chicago, and I’m saying, ‘Why aren’t we playing in Chicago?’”

The Buoys did get to play once at the Whiskey a Go Go in West Hollywood, and their next single, “Give Up Your Guns,” was a humongous hit in Europe despite missing the top forty on the American charts.

“I love hearing the stories about his band days. He’s a very interesting boss,” says Ariel McKennas (below), who has worked with Chris for about 10 years, starting as a high school student, and since working during summers through college and a career as a teacher. “It’s fun to see the people come back each year and to meet new people. The gas workers really like the place.” 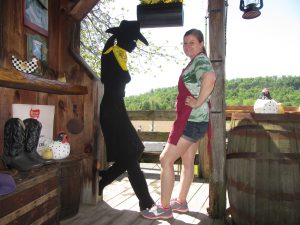 Framed album covers of the Buoys’ releases are the newest items to grace the walls of Chris’s eclectic outdoor eatery. Nonetheless, the predominate theme is country and western as accentuated by a soundtrack of bluegrass and classic country hits that plays at comfortable levels throughout the venue.

“We love the hokey music, especially ‘Smoke Smoke Smoke that Cigarette,’” says Colleen Ell of Tunkhannock, who frequents Chris’s regularly, especially when her son, Ryan, is home from the Air Force academy. “And we love the fact that we can bring our dog, Jenny (below).” 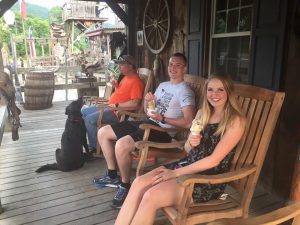 “We allow pets here,” Chris concurs. “A lot of people bring their dogs.” He laments that he has not yet added some dog-friendly foods to the menu.

There are some significant changes and additions to the menu since he left the fair, however. Chris decided he’d had enough of the smoke from the fire pit he used to use to cook his beef. All the meat is now slow-cooked in ovens, and the menu includes pork, ribs, chicken, and fish. For desert, there are more than 40 flavors of hard and soft custard. 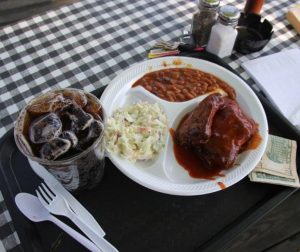 “My daughter swears by their Texas fries and ribs, and I’m a big fan of the pork barbecue with horsey sauce,” Naomi Henning of Mehoopany relates. “It’s the best place to eat on Sundays after church.”

Chris is still adding on to the property, planning a fire pit surrounded by a ring of small covered wagons that he constructed last year as a new dining area. In the meantime, he keeps adding more silhouette cutouts and flags. “Putting decorations away each year takes a little longer,” he says with a chuckle.

Chris’s Western BBQ is open Thursdays through Sundays from 11 am to sundown from mid May to mid October. Take out orders can be called in to 570-869-RIBS. 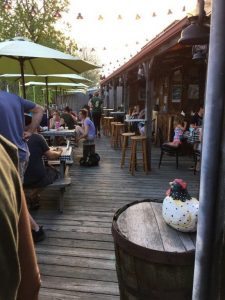