In: Mehoopany Creek
With: 0 Comments 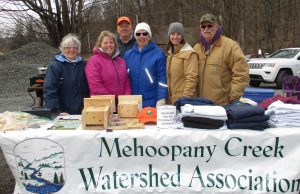 “Fast, high and muddy – three things you don’t want on the first day,” said one of three frustrated fishermen as they climbed the bank away from Mehoopany Creek on April 2. Heavy thunderstorms two nights earlier had churned the usually tranquil stream into a froth that resembled chocolate milk.

That didn’t stop dozens of anglers of all ages from trying their luck at the confluence of the main and north branches of the creek that is also at the epicenter of a series of stream remediation projects by the Mehoopany Creek Watershed Association (MCWA). What had been devastated during the floods of 2011 has since become a major destination for families that often begins with the first day of trout season.

Two hours after its official start, nobody knew of anyone who’d brought in a fish, despite the fact that it had been adequately stocked during the previous weeks. But MCWA members have made the day an enjoyable, annual social event that draws locals and visitors, who enjoy coffee, hot dogs, and other snacks while getting caught up with regulars and learning what’s happening with the waterway.

“The Roger Hollow project is completed,” current MCWA president Kevin Ray said of a multi-phase stabilization program that stretches for several thousand feet downstream into Mehoopany Township. “Now we’re waiting for a grant to do some maintenance on the north and main branches. These heavy rains and high creek levels move rocks.”

Mehoopany Creek is situated largely within Wyoming County, but its headwaters include streams and runs in Sullivan, Bradford and Luzerne counties. All told, the creek drains 134 square miles of runoff from elevations as high as 2,382 feet on Bartlett Mountain to 650 feet at the Susquehanna River at Mehoopany.

One of the MCWA’s goals is “to take a wonderful place and make it better.” Grants acquired by the organization over the years have been used to build buttresses to shift the stream back and forth and slow its flow. Other features have included waterfalls made of massive stones that increase aeration and feed deep pools of water.

“I think they did a lot of good stuff with it,” said Eddy Dziak of Lovelton, who has fished the area with his brother Billy (below) since they were old enough to hold poles. 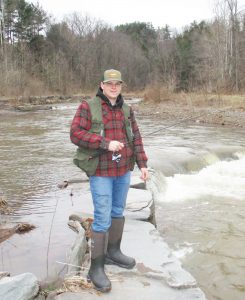 “It helps create a lot of holes, and it holds a lot of fish,” Billy added.

That is not to say that the organization’s efforts are appreciated by everyone. While many people in the area are aware of the MCWA, the ultimate goal of projects years in the making – often stalled by stream conditions – are not always understood.

“They think it’s flood control. Sometimes we fix the banks that get wrecked, but it’s more for stream hydraulics,” Ray said of the mixed perceptions of what the group is trying to accomplish and maintain. Some see the hewn stones as unnatural and the antithesis to occasional dredging operations in the past. But vegetation quickly takes over each project area, further slowing the water and providing shady holes for fish and habitat for a number of endangered species.

The annual opening day event is geared toward increasing public awareness. While The MCWA relies primarily on grants for the big projects, the sales of food and memorabilia with MCWA logos helps cover insurance costs for the group for the year.

To learn more about joining the Mehoopany Creek Watershed Association or contributing to the organizations’ efforts, interested readers can follow the organization on Facebook, send donations to PO Box 73, Mehoopany, PA 18629 or reach out via email to mehoopanycreek@yahoo.org. The group meets at 7 pm on the third Thursday of every month at the Forkston Township Building.