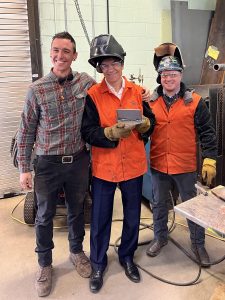 Dr. Mehmet Oz, a candidate for the U.S. Senate hoping to represent Pennsylvania, made a quick visit to Susquehanna and Wyoming counties on Monday. In advance of an energy conference he was slated to convene in Cannonsburg on Wednesday, he was primarily in the region to gain a better understanding of how the natural gas industry is affecting communities. He visited the Susquehanna County Career and Technology Center at Elk Lake, a gas pad operated by Coterra Energy, and the Lackawanna College School of Petroleum and Natural Gas in Tunkhannock.

At SCCTC, executive director Dr. Alice Davis provided tours and opportunities to talk with students and faculty in the nursing, welding and CDL programs. Oz surprised some by giving an impromptu lecture to the nursing students (below) on heart surgery techniques that he once employed and by donning protective clothing to practice welding. 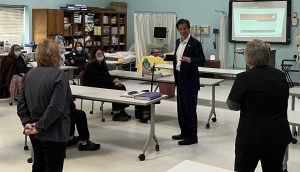 “He was very hands-on and actively engaged with the students and staff the whole time,” Davis remarked. “It was impressive that he came out to see what the needs are in the industry and what we are doing to meet those needs.”

Coterra’s B.J. Cline fielded a wide range of questions from Oz at the Kropa pad, where the candidate seemed unfettered by the unseasonably cold weather and persistent snow squalls.

Stark asked each of the participants to tell Oz how their respective organizations have evolved with the gas industry and how that has benefited the region, from increasing average family incomes and property values to enhancing services and educational and cultural opportunities.

“We know that the jobs are here and that they are staying here. These are family-sustaining jobs,” said Shave, citing the partnerships between gas companies, NTIEC and CCM and how they work together to subsidize trades education in 20 school districts not only to meet the needs of the industry but to keep young adults close to home who prefer to stay.

Clayton credited industry leaders with making construction of a new hospital possible for Susquehanna County’s 40,000 residents. She credited Coterra Energy alone with investing more than $6-million into scholarship programs that benefit school-age children from preschool to college. The funding, she explained, is used to support students interested in other careers as well.

“From a community standpoint, we want to make sure that all of those businesses are successful,” Stark told Dr. Oz, acknowledging the CCM’s ability to identify needs, find funding, and make contributions that can help to cover tuition or provide something as seemingly simple as instruction books or a pair of work boots.

In his years of overseeing programs that help people in need, Brady noted that meeting fuel and heating costs can be as stressful to families as food insecurity. “It’s such an advantage to families to have natural gas,” he stated. “It’s the most affordable way to heat their homes.”

Suydam recalled the frustration of local residents in the early days of natural gas production in the area when they were dealing with the impacts of heavy industry without directly benefiting from the resources beneath their feet. “While it was being drilled all around us, we didn’t have access to it,” she told Oz. “It took 10 years of petitioning and pounding our fists on the table,” Suydam said of working with industry partners and the DCED to finally get enough state grants to cover the upfront costs of bringing natural gas to Tunkhannock.

Rogler noted that the Cultural Center and Dietrich Theater may not even exist if not for direct contributions from gas companies and an expanding infrastructure from which they too will realize savings in heating costs. “Coterra has helped make us sustainable,” she stated. Additionally, Rogler suggested that a stronger economy allows for more people to go out to the movies and dinner and make donations to the Cultural Center on their own behalf.

Oz was momentarily perplexed as Stark explained that the company was sitting on more than twice the amount of gas that it could get to markets. Stark referred specifically to two stalled pipeline projects that would allow for gas to be moved directly to New England, a market starved for energy that has largely been relying on imports from Russia.

In response to what he had heard, Dr. Oz maintained that the need for natural gas could not be more obvious, blaming what he called a “false narrative” about the Green New Deal that advocates a rapid reduction in the use of fossil fuels in favor of renewable energy sources. “It just can’t work,” Oz said of goals to supplant PNG and coal with alternative fuels in a matter of years.

“We’ve already reduced our carbon footprint more than any other country,” he stated. “Today, if you want to preserve the planet, you have to use natural gas.” The nation would be much better off, he maintained, by accepting natural gas as the most effective bridge to a day when alternatives are viable.

“It was great to have the opportunity to discuss with Dr. Oz the importance of programs like ours,” Sue Gumble, program director of the School of Petroleum and Natural Gas said afterward.

“We would love to see all of the candidates venture to Tunkhannock to see our state of the art facilities and just how well we contribute to this thriving industry and the economic development of our region,” Lackawanna College president Jill Murray added. 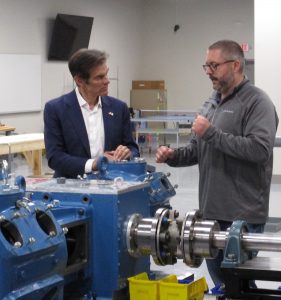 Bill desRosiers of Coterra (right) shows Dr. Mehmet Oz around the heavy equipment lab at the Lackawanna College School of Petroleum and Natural gas on March 28. 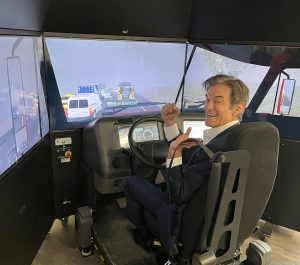