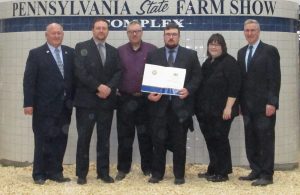 Emily Supancik (top) flanked by family members and representatives of the Pennsylvania Farm Show Scholarship Foundation and Tyler Peterson (above) were the two winners from the Endless Mountains region in Tuesday morning’s program.

Twenty four Pennsylvania college students who are pursing studies in agriculture-related fields received scholarships on Tuesday morning prior to the start of the annual Junior Livestock Auction, which funds the scholarship program. Among them were Tyler Peterson of Tunkhannock, Wyoming County, and Emily Supancik of New Milford, Susquehanna County.

Each received $3,500 directly from the Pennsylvania Farm Show Scholarship Foundation and an additional $2,000 from Penn State’s College of Agricultural Sciences and Delaware University. Both Peterson and Supancik have many years under their belts of showing livestock at the Farm Show and selling them at the auction.

“It’s been a great experience showing at the Farm Show for all of these years,” said Peterson, who added that the additional $2,000 he received was a great surprise. “We didn’t know they were doing that until the morning of the scholarship program.”

“I’ve been showing at the Farm Show for four years, making sale twice with market lambs,” Supancik related. “The scholarship program is a wonderful asset to those who want to go to school and continue their careers in not just agriculture, but all aspects of life.”

Since its start in 1993, the Pennsylvania Farm Show Scholarship Foundation has awarded more than $1.6 million to 552 junior Farm Show exhibitors. With the exception of Peterson, Supancik and Wyatt Kosa from Potter, the winners were primarily from southern and western Pennsylvania.