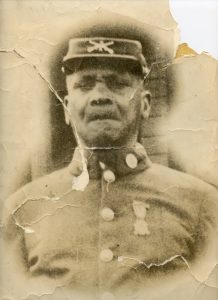 William B. Payne wearing the Civil War uniform of his father Sgt. Ralph Payne, 41st Regiment, United States Colored Troops, who served in the Appomattox Campaign, was present at the Confederate surrender, and was among the troops who carried news of freedom to enslaved African Americans in Texas, in June 1865.

Payne participated in the Appomattox Campaign in “pursuit of Lee, April 3-9, 1865” under General U.S. Grant and was among more than two thousand African American soldiers who were present when the confederates surrendered to the Union Army.

After the war, Ralph Payne traveled with the 41st Regiment to Texas arriving at Brazos Santiago on June 3, and was among the Union soldiers who spread the news to African Americans in Texas that they were free. Juneteenth celebrates the day, June 19, 1865, that Union General Gordon Granger formally announced, in Galveston, that enslaved Africans Americans were emancipated.

Help us Tell Our Story
The Dennis Farm Charitable Land Trust is currently raising funds to meet a matching grant from the National Endowment for the Humanities to transform the 195-year-old Dennis Farmhouse to a state-of-the-art museum that tells the history of the United States through the extraordinary history of the Perkins-Dennis Family, a free landowning African-American family from the colonial period over 200 years ago.