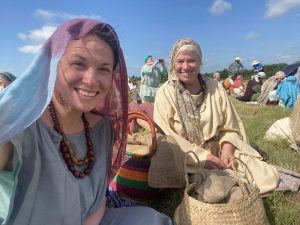 The extras for an upcoming episode of The Chosen had many props to choose from for selfies and group photos away from the sets where filming was taking place. Al and Sharon Davies (top) were among the “cast of thousands” to endure a Texas heatwave. Above, Jessica Sheridan and her mother, Eileen Craige, take a break between shoots.

A number of local residents enjoyed the experience of a lifetime, traveling to Texas to appear as extras for a made-for-TV production called The Chosen. Based on the Biblical interpretation of the life of Jesus of Nazereth, The Chosen is promoted as the “number one crowd-funded media project of all time.” Director Dallas Jenkins spearheaded the effort to create an original, faith-based series outside the Hollywood system.

“It pretty much follows the Bible,” said Al Davies of Heart Lake. “It’s made for a TV audience, so there are some changes, but it’s as close as possible.”

“It is done with such quality and in such a way to appeal to ‘veteran’ Christians as well as newcomers and those curious about the faith,” his wife, Sharon, said of The Chosen.

The Davies, who have done mission work for years, were introduced to the series at Friday night Bible studies at the Church of Owego, an outreach ministry also called Haven of Rest that focuses on families in need who aren’t traditional church-goers.

The goal of Jenkins and VidAngels Studios is to produce eight seasons of eight episodes each. Season two is completed and currently being aired, and the filming of the third season began in April. As the scope of production grew, so did the need for more space for filming. According to Al, a rancher south of the Dallas/Fort Worth area offered the use of his property for production, and construction began on iconic Biblical cities and props.

Season two includes the telling of the “Loaves and Fishes” story interpreted several times in the New testament. According to the Scriptures, Jesus and his disciples repeatedly broke five loaves of bread and two fishes offered by a young boy until they had satisfied the hunger of 5,000 or more people gathered to see the Messiah.

Epic religious drama films go back a full century with Cecil B. DeMille’s “The Ten Commandments” being the most popular, boasting a “cast of thousands” in 1956. But DeMille was already a fixture in Hollywood and industry support came easily to him. Dallas Joseph and his team devised a clever way to increase funding and pull together their own casts of thousands, further engaging fans in his project.

“At the end of Season 2 it was announced that, if you made a significant contribution, you could be one of the extras,” Al explained. Sharon made a contribution on Al’s behalf, assuming that he’d be thrilled with the idea. “I wasn’t sure at first. It was a bigger thing that I wanted to do,” he recalled. “I was hesitant of going by myself. But then she said that she would go too.”

Meanwhile, Eileen Craige and her husband, Rick, of Montrose had also become big fans of the series, especially the character development. “It was a nice way to picture Jesus as someone real, even showing a sense of humor,” Sharon stated.

The Craiges attend Bridgewater Church and conduct small Bible studies in their home and began incorporating episodes of The Chosen into their gatherings. When Rick saw the ad calling for extras, Eileen was immediately interested. “I’d have been really disappointed if I wasn’t involved,” she said, noting that she already had some stage experience. “I loved the show so much that I wanted to be a part of it.” The Craiges opted to send their daughter, Jessica Sheridan, who’d originally brought the program to their attention, to Texas as well.

Once they were registered, Eileen explained, they received weekly emails from the organizers that provided all of the details that they would need to participate, including how to put together an authentic period costume. “They even told us how to accessorize it to appear more Greek or Palestinian or other nationalities,” she related.

The Davies and the Craiges became aware of each other’s involvement through a relative of the Craiges and talked a few times on the phone prior to traveling separately to Texas. Due to the sheer magnitude of the event, however, they never saw each other on the set, despite being shuttled just an hour apart from a large stadium to a camp where the crowd-funders spent the better part of June 7 and 8 between scenes.

The site was so large that, in addition to the film sets, there were vendor areas, a stage featuring live entertainment, children’s activities, and a huge tent where (literally) more than 5,000 people were fed daily. Props from previous episodes were set up for participants to take photos.

When he was in line to eat, Al Davies recognized some characters from previous episodes among the masses, including several disciples and Roman soldiers in their bright red uniforms. At one point, Eileen recalled, the director and several key characters spoke to them from the stage, thanking them for their contributions and telling them how much their involvement made the filming seem more like the intimacy they experience in a stage production.

“It was great to see some of the cast and producers in person while we were waiting to appear on set,” Sharon Davies remarked.

“It was awesome. It was hot. The heat index at 2 pm was 103 because they were having a heat wave,” Al offered. “They were calling us the ‘Roasted Chosen.’”

“It was really quite remarkable,” Eileen concurred. “There were so many people, but there wasn’t one grumpy person, even though it was 96 degrees.”

Series three of The Chosen will begin airing later this year or at the beginning of 2023. According to Al, no network or cable channel has permanently picked up the program, though he has seen it broadcast on Spectrum on the weekends. Episodes can also be found on Facebook and YouTube. The series is available for purchase, which is how most people seem to be finding it currently.

“I’d encourage all people to check out the series,” Sharon stated. “Regardless of your spiritual persuasion, it brings the Gospel to life in a manner relevant to the times in which we find ourselves today.”

“I’m excited to see the new episodes when they come out,” said Eileen. “I may never see myself, but I will know that I was there.”