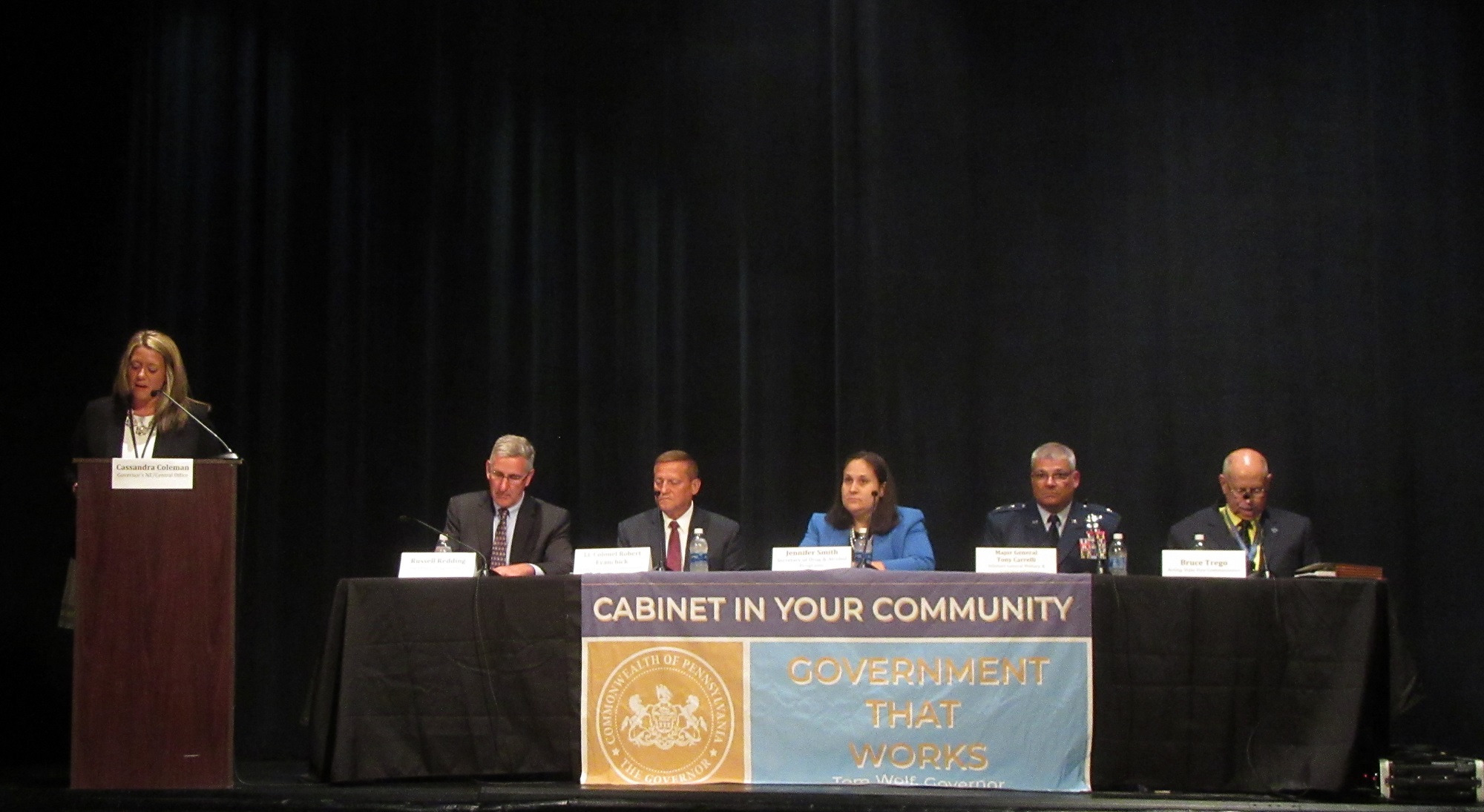 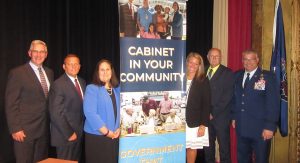 Gov. Tom Wolf’s Cabinet in Your Community series of town hall-style meetings came to Towanda on July 25. Cabinet members in charge of military and veterans affairs, drug and alcohol programs, agriculture, conservation, public health and safety, firefighter training and the state police fielded questions and concerns from audience members. Local participants primarily included elected officials and other civic leaders. Cassandra Coleman, director of the Northeast/Central Office of the Governor, facilitated the discussion at the Keystone Theatre.

Some recurring topics that were addressed by panel members from varying perspectives included rural fire companies struggling with staffing, a shift in the focus on the opioid crisis, specific needs for aging military veterans, and concerns about a potential invasion of the spotted lantern fly, which is still largely relegated to southeastern Pennsylvania but not at all under control.

Tioga County Commissioner Erick Coolidge acknowledged that Act 13 funds have helped fire companies purchase needed equipment but asked what measure of support the state could provide for the recruitment of the next generation of volunteers. Subsequently, Sullivan County Commissioner Donna Iannone asked acting state fire commissioner Bruce Trego if the state has different standards for dealing with paid and volunteer firefighters.

While the state provides training and certification for firefighters at numerous levels, Trego responded, there is a specific focus on making such services as flexible as possible to accommodate a shrinking volunteer base. More online training courses are available, and efforts are being made to take training to the firefighters to mitigate their cost and transportation time to attend training centers.

From a state perspective, Trego continued, there are three key challenges: certification cannot be mandated, communities are not supporting fire companies the way they used to, and retention of firefighters is as difficult as recruitment.

“Not everybody who joins a fire company has to be the person who enters the building,” Trego remarked, noting that there are five levels of firefighter training starting with a 16-hour beginner course. “People are needed at many different levels.”

Too many firefighters, he added, are doing double duty – responding to calls and serving as administrators. Years ago, he noted, the administrative end of the fire company was handled by professionals in the community whose interest and involvement have waned over time.

It is the goal of the state fireman’s association to make programs flexible enough to allow the chiefs to decide who needs what level of training. Other initiatives include more programs for teens and post traumatic counseling services for emergency responders. All programs are free for volunteers, said Trego.

In response to a question by Bradford County Commissioner Ed Bustin about the need for more drug treatment centers and sober houses for those dealing with addiction, State Department of Drug and Alcohol Programs secretary Jennifer Smith indicated that the approach to dealing with the crisis is evolving. “Our first job was keeping them alive,” she said in reference to providing naloxone to first responders. “Next is getting them into treatment. And next is working on the prevention component.”

Her department is working with law enforcement to increase “warm hand offs” of drug users to facilities that are better equipped to deal with them that prisons. And the state is stepping up the process of licensing and regulating drug and alcohol treatment centers.

Until recently, Smith noted, the state has had no authority to regulate hundreds of private centers currently in operation across the Commonwealth. A new recovery house task force “is in the process of drafting what that regulation will look like,” she explained. Many centers operate as “clean and sober” houses, Smith noted, but without an effective treatment component. The Department of Drug and Alcohol Programs hopes to certify an additional one thousand centers to better serve rural Pennsylvania.

Bradford County Veterans Affairs director Pete Miller asked Maj. Gen. Tony Carelli what the state offers for aging veterans, noting that 67 percent of Bradford County’s veterans are more than 65 years old. Carelli replied that it is very important to get all veterans officially registered with both the state and federal veterans associations so that they can be aware of and best take advantage of the programs and financial support that is available. A veterans trust fund has been set up, he explained, 50 percent of which supports grant organizations and the 50 percent going to direct assistance programs. Many people, Carelli suggested, forget or are not aware that there is a veterans association at the state level that can sometimes respond to their individual needs more quickly than the federal agency.

Other panel participants included acting state police commissioner Lt. Col. Robert Evanchick, who noted that 90 percent of rural Pennsylvanians depend on the Pennsylvania State Police for coverage and that there are currently 444 new officers needed. Evenchick’s 39 years of service to the department began with stints in Bradford and Sullivan counties, he related.

Department of Agriculture secretary Russell Redding wrapped up the program with the latest news on the spotted lanternfly, which was introduced to Pennsylvania via shipping containers from Asia and is posing a serious threat to the fruit industry throughout the state.

“You don’t have it here, and you don’t want it here,” said Redding. “Our goal is to eradicate it, and we need a lot of public participation.”

A new approach is being investigated by the Penn State Extension. While the spotted lanternfly has not yet met a plant of which it doesn’t like to drain its sap, Redding explained, Tree-of-Heaven, an invasive plant from China, is among the insect’s favorite. Aggressive eradication of the plant might be one way to control the insect.

Redding also addressed a question about chronic wasting disease among the state’s whitetailed deer population, noting that there is not currently a separate funding stream to address the problem, but his department is looking into ways to better keep deer on 1,200 tree farms away from those in the wild.