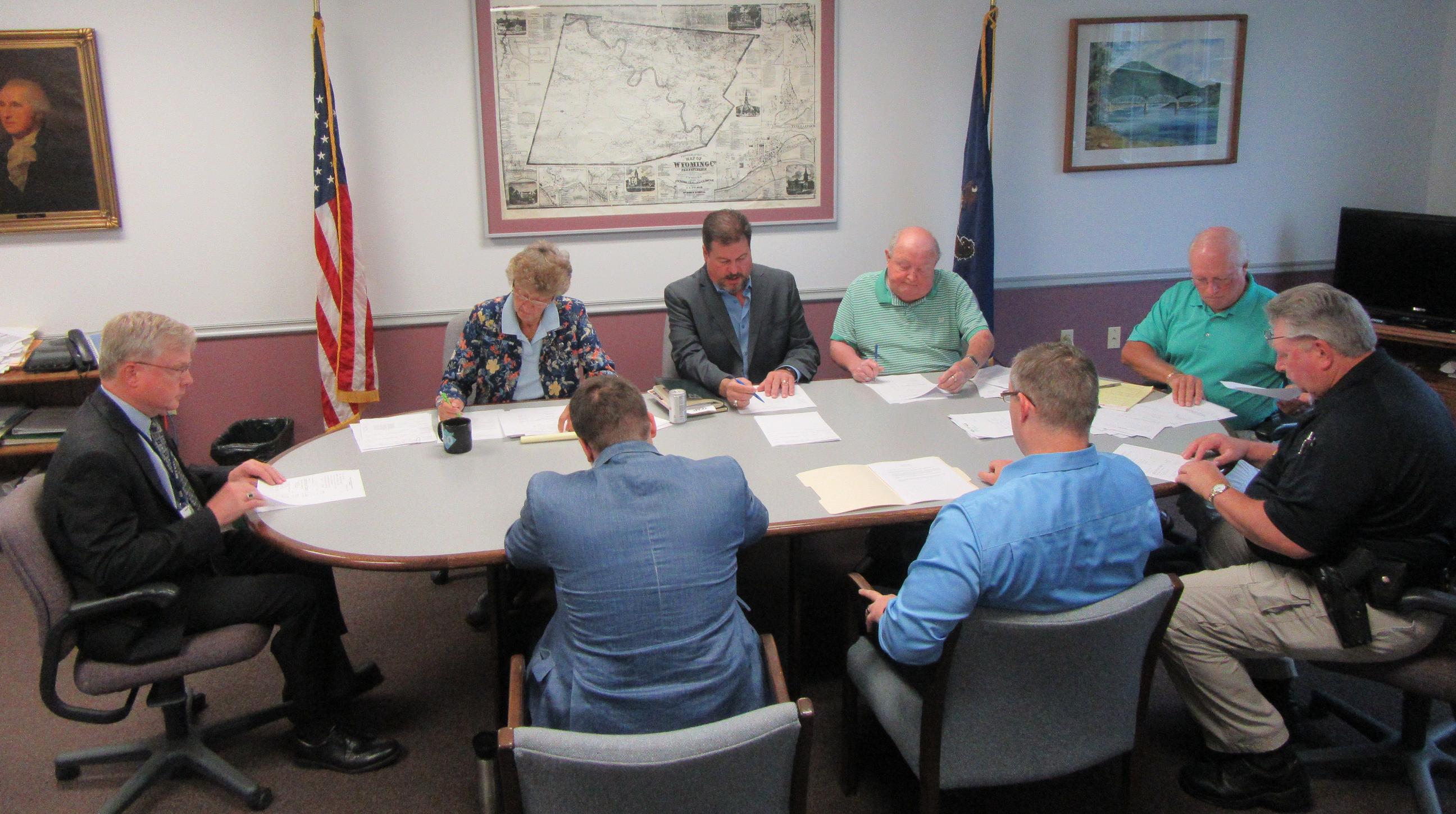 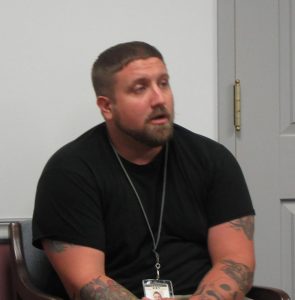 Members of the Wyoming County Prison Board (top) held their regular public meeting in Tunkhannock this morning, at which Ryan Taylor (above) provided an update on the SmartRecovery program.

The Aug. 10 meeting of the Wyoming County Prison Board was relatively short, with a proportionate amount of both good news and bad. The number of people in the prison system continues to creep upward; maintaining a consistent crew at the facility in Tunkhannock continues to be a challenge; and compounding electrical and technical problems are beyond quick fixes.

On the other side of the coin, a second 12-week SmartRecovery course has been completed, and discussions are underway to enhance transition options for those completing their sentences and returning to a life outside the prison.

Official prison population stands at 78, with 13 boarded out. Even if one more person is released by day’s end, as Warden Ken Repsher is hoping, the monthly cost to the county for outsourcing inmates is steady at $14,775. Last year’s excessive boarding costs were paid for with Natural Gas Impact Fee money, which was primarily designed to enhance communities through infrastructure projects and the purchase of new equipment for first responders, but can be used under the guise of “public safety” to cover jail costs.

The resignation of two corrections officers was announced, one full-time and one part-time. Corey Kucker left the team to return to college to pursue a masters degree, Repsher noted, and part-time CO Dorothy Loch left her uniform and keys in Commissioner Tom Henry’s office while he and the other commissioners were at a CCAP conference in Erie.

In other personnel news, Michelle Collett was promoted from a part-time to full-time cook at the prison. Repsher said that he has one application to review in advance of refilling the two CO vacancies.

A spike in inmates with medical issues has resulted in an increase in overtime for staff and medical expenditures for the prison.

The most pressing news at the facility, however, involves the electrical system, which has some grounding issues. The anomalies are “frying electronics,” Repsher remarked. “It’s costing us some extra bucks.”

Compounding the situation is a control panel that was installed in 1986 that received a subtle upgrade six or seven years ago. When Commissioner Henry suggested, with a glint of hope, “It’s not a security issue,” Repsher’s nonverbal response indicated that the problem is indeed serious. The system controls all of the cells.

The estimated cost of replacement is $50,000. Repsher related that he plans to solicit professional help to provide full assessments of both situations upon which decisions can be made for adequate remedies.

“Well, that’s depressing news,” said Henry. “Do you have any good news?”

“My report is over,” Repsher responded with sincerity.

The good news at the Prison Board Meeting came in the form of plans and programs to offer inmates the best chance of staying out of the system and resuming productive lives upon their releases.

Henry reported that he’d been talking with Denise Traver, deputy director at PathStone Corporation, who may be able to help Wyoming County find grants to fund transitional housing and other programs that help former prisoners find their way among the general public when they get out of jail. Henry would like to pair her ideas with services offered by TREHAB to provide as many opportunities as possible that will not cost tax payers any money.

SmartRecovery facilitator Ryan Taylor was on hand to announce the end of a second 12-week session inside the jail. He and fellow facilitator Jennifer Jones also run meetings several nights per week for anyone seeking freedom from addictive behaviors, including eating, sex, drugs, alcohol and gambling.

Taylor and Jones started SmartRecovery in February with Michael Kranick, conducting sessions of the InsideOut program on Saturdays at the prison. Kranick has since taken another job on weekends but helps when he can, according to Taylor. The religion-neutral program works equally well for male and female prisoners in reducing recidivism rates among new commitments with a history of substance abuse.

The sentencing length of eligible prisoners varies greatly. Some are released or transferred during the program, and some simply aren’t ready for it. Each facilitator has already been through the criminal justice system and dealt with addiction, and Taylor gives a lot of credit to anyone who enrolls.

“It’s not easy. We focus on ourselves and our persnonal part in any type of behavior, not others,” he explained in a telephone interview after today’s meeting. “It’s hard to look at yourself.”

Taylor cited “mollification” as one of the most common criminal thinking errors. “We want to play the victim because we don’t want to take responsibility,” he explained.

The overall focus of the four-step course is to provide coping skills and support mechanisms that will be useful when prisoners are once again facing the pressures of the real world. “We all have a tool box. We want to fill it up with as many tools as possible,” said Taylor. “Every week, we build off the week before.”

“I focus a lot on women empowering themselves and empowering each other and giving them ideas on how love themselves,” said Jones, who works exclusively with the women in the program. Though the results of addiction and substance abuse may be similar among the sexes, a nurturing approach with female clients has proven effective for Jones.

“If a woman is doing very well, I encourage her to keep doing what she is doing,” Jones related. “Sometimes, we don’t realize the differences in our attitude until someone points it out. I’ll say, ‘You’re doing great in this area, but maybe you could do better in this area.’”

Out of 15 males and 15 females deemed eligible to start each of the two courses so far, five men and eight women have “graduated.” Success, Taylor related, is based on feedback sessions conducted halfway through and at the end of the course and is largely subjective.

Graduates tell Taylor that they feel more comfortable talking about their personal situations within a group. They also finish with a better grasp of the variety of support that is available to them, which includes other recovery groups and programs.

“We try to explain the benefits of each program,” Jones agreed. “Different things work for different people. We’re all about whatever else works, including medically assisted treatment.”

The next meeting of the Wyoming County Prison Board, which is open to the public, will be held in the commissioners board room at the courthouse in Tunkhannock on Tuesday, Sept. 5, at 9 am.