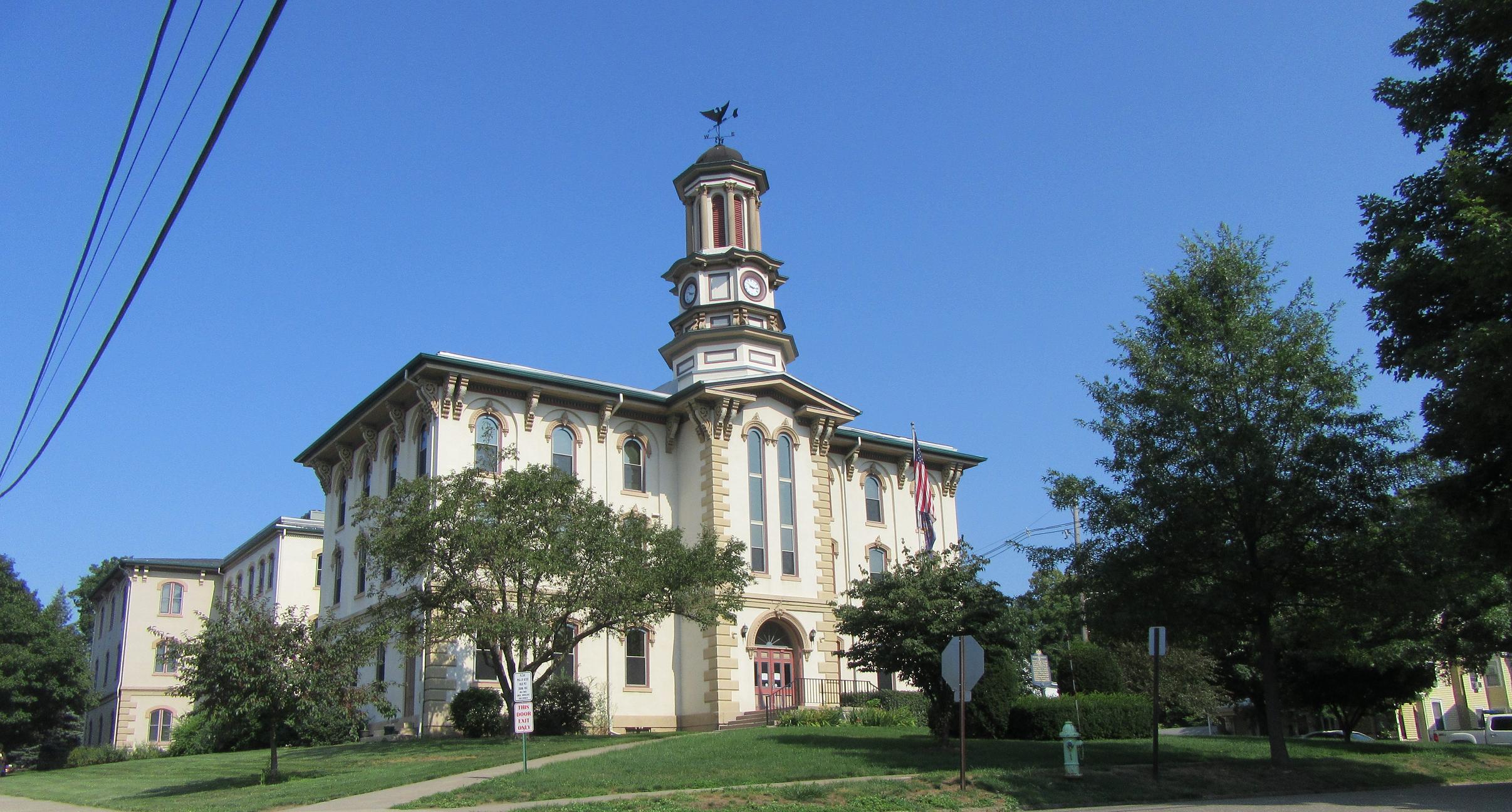 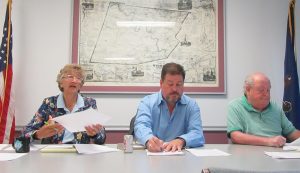 Wyoming County Commissioners (above, from left) Judy Mead, Tom Henry, and Ron Williams met at the courthouse in Tunkhannock on Aug. 10, two days later than normal due to their participation in a CCAP conference earlier in the week.

A former state employee bent the ear of the Wyoming County Commissioners this morning on the topic of gerrymandering and a movement in Pennsylvania to bring the process under control if not reverse the trend entirely.

Jeffery Zimmerman, representing Fair Districts PA, warned that the process of redrawing congressional and senatorial districts in Pennsylvania has gotten so out hand that only the concerns of those on the far left and far right can be addressed. 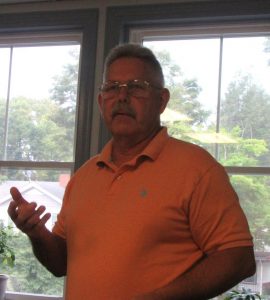 “The voices in the middle are lost. There’s no reward for compromise,” Zimmerman (above)  lamented. “Legislators are now choosing their voters, rather than the other way around.”

Gerrymandering is nothing new, he admitted. The phrase was in fact coined and decried in the early 1800s. What has made gerrymandering worse than ever, Zimmerman explained, is the use of computer data by the parties in power to remap districts that ensure their re-election.

He showed as an example southeastern Pennsylvania Congressional District 7, which has laughingly become known as “Donald Kicking Goofy.” Its shape is in fact so incongruous that half of another district fits inside it. The lines have no bearing on the communities that make up the five separate counties they are intended to represent. (https://www.fairdistrictspa.com/the-problem)

District 16 includes mostly farmlands in Lancaster county, but a small “lasso” somehow incorporates the economically distressed city of Reading. The result is that the schools in Reading are severely underfunded because, naturally, nobody in Lancaster County cares about them.

The gerrymandered district connected to the Endless Mountains is District 11, currently represented by Lou Barletta. It nearly stretches from the top to the bottom of the state, incorporating the largely unrelated counties of Wyoming, Columbia, Cumberland, and Montour, as well as parts of Carbon, Dauphin, Luzerne, Northumberland and Perry.

Fair Districts PA and similar groups like Respresent.Us and Common Cause are pushing for the formation of a non-partisan 11-member commission that would first embark on a redistricting campaign then work to maintain a balance of voters in districts as fluctuating populations mandate their restructure. In addition to nearby Luzerne and Monroe counties, 70 cities and boroughs and the Greater Scranton Chamber of Commerce have already endorsed the plan.

Commissioner Ron Williams noted that a version of the plan was brought up for a vote at the CCAP conference in Erie this week but was tabled due to requests that some language be changed in it. Commissioner Judy Mead asked Zimmerman how the panel would be selected.

There would first be a call for volunteers among citizens with solid voting histories, he explained. The first to be excluded would be anyone who routinely changes parties between elections, as well as politicians and relatives of politicians. Forty names would be chosen randomly from a pool of applicants to match the demographics of the state based on age, ethnicity, party affiliations and other factors. Finally, a system of checks and balances would come into play to whittle down the original 40 to just 11 commission members.

Rep. Karen Boback, Zimmerman noted, is a cosponsor of a PA House version of the plan. Sen. Lisa Baker has not yet lent support to any existing proposal but has spoken in support of such legislation. Zimmerman asked the Wyoming County Commissioners to pass a similar resolution.

“We agree that something should be done, and we want to sign a resolution,” Commissioner Tom Henry responded. The board agreed that they would first like to see the revised CCAP version of the proposal, which should be available to them shortly. Henry asked Zimmerman and his wife to come back to the next commissioners meeting scheduled for Tuesday, Sept. 5.

Second Round of Recycling Planned

Electronic recycling conducted on May 6 exceeded all previous events, according to director Mike Rogers. “It was the first time in the 10 years that we’ve done it that I had to go out (onto Route 92) and direct traffic,” he remarked at a May meeting, noting that 11.19 tons of equipment was brought to the center in Tunkhannock Township by 163 people. In an average year, the county recycles 17 tons of electronics.

Overall business at the center, located at 130 Tunkhannock Township Drive, has been steady, Rogers told the commissioners. There has been a marked increase in cardboard, he noted, due to an increasing number of people shopping online and receiving merchandise at home.

Prices for aluminum and other recycled materials are holding steady, said Rogers, but he expects that to change. China has been one of the biggest buyers of US recycling but has been complaining of contanimates. The problem, Rogers explained, is that most US recycling is “single stream,” meaning that all recyclables are collected in single containers. Wyoming County does “dual stream” recycling, but that doesn’t have much of an effect on the overall market.

Nonetheless, both Rogers and the commissioners extolled the virtues of recycling and expressed their collective dismay that the Tunkhannock School District has yet to adopt a recycling program to back up a curriculum that includes education about recycling. Chief Clerk Bill Gaylord encouraged Rogers to contact district superintendent Heather McPherson to see what could be done.

Not only does recycling “feel good,” Henry remarked, “It’s good for the environment, and landfills are running out of space,” Rogers added.

All three commissioners and the chief clerk attended the Summer CCAP (County Commissioners Association of Pennsylvania) Conference in Erie this week and suggested that finding out all the things the counties have in common can be both comforting and disconcerting.

Williams participated in a Courts and Corrections meeting where representatives from counties in which prison populations are within reason shared ideas with counties where populations are out of control. “There’s no quick solution,” Williams stated.

When a problem is more isolated, Henry agreed, CCAP members might find ways to fix it, “but when it’s everywhere, you don’t know where to start.” The opioid epidemic is so far-reaching, for example, that the best the counties can agree to do is share statistics and lobby funeral home directors to help quantify data.

Henry also took personal interest in a presentation on alsheimers and dementia by Teresa Osborne, secretary of the state’s Agency on Aging, the statistics from which surprised him. More than 700,000 care workers are currently looking after more than 400,000 citizens with some level of dementia.

“It was interesting to hear that there were so many people,” Henry remarked.

“It involves a lot of money and a lot of time,” said Mead, noting that a growing number of people need 24/7 care.

Other than two resignations at the Wyoming County Jail (read here: http://www.endlessmtnlifestyles.com/?p=8181), the only other personnel change noted since the last meeting was the hiring of Jennifer Bose as a full-time administrative assistant at the Domestic Relations office.