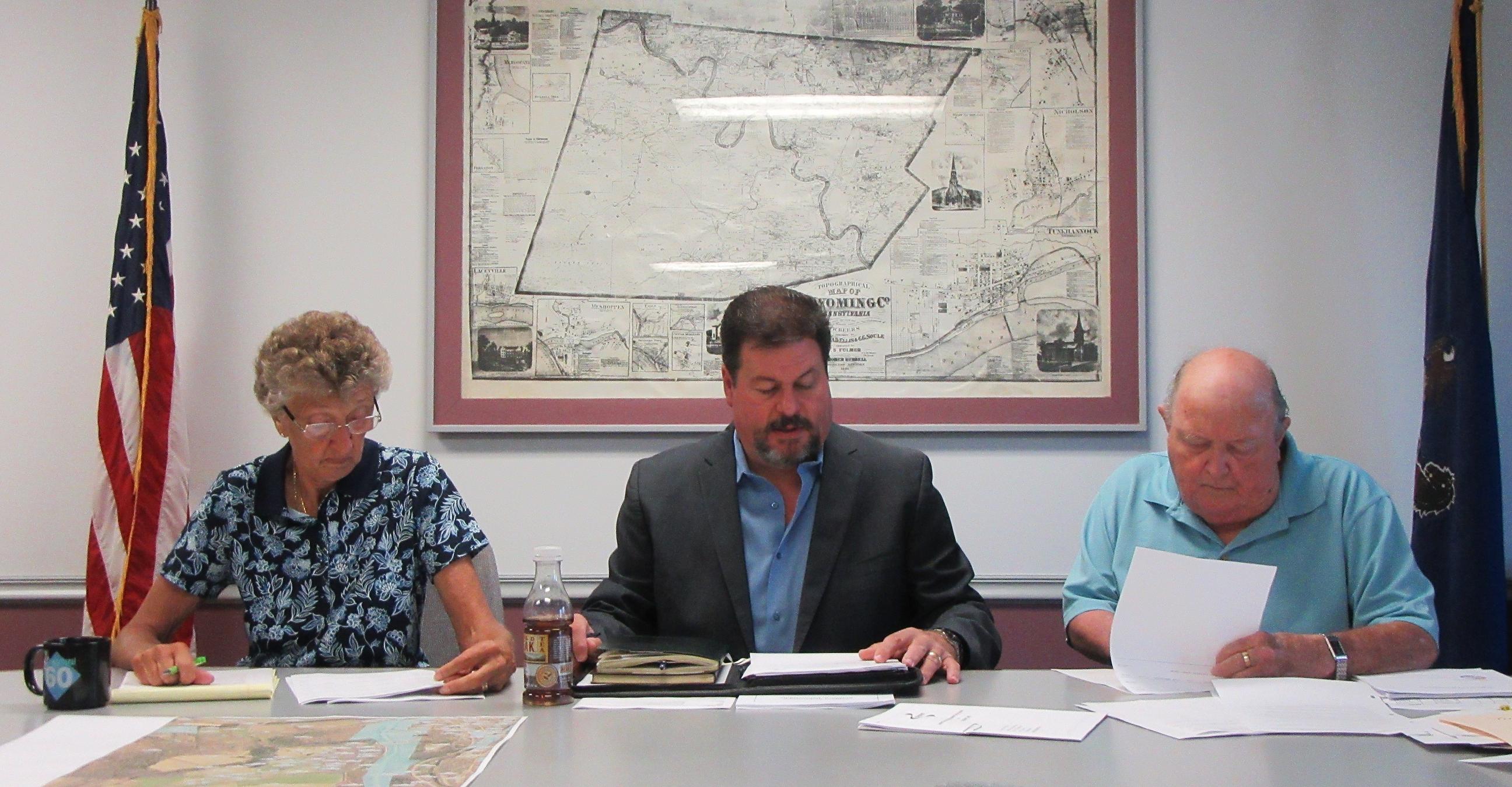 The Wyoming County Commissioners (above) announced the hiring of several new employees at their regular public meeting on Aug 22 at the courthouse in Tunkhannock and agreed to sign a letter of support for fair redistricting in Pennsylvania.

The Wyoming County Commissioners made good on their pledge to representatives of Fair Districts PA to extend their support to the group’s efforts to reverse extreme gerrymandering in the state with the formation of a bipartisan panel that would redraw the commonwealth’s congressional and senatorial districts every 10 years.

Jeffery and Tarri Zimmerman had presented the proposal to the commissioners at an Aug. 10 meeting, noting that Rep. Karen Boback is a cosponsor of a PA House version of the plan. (Read more here: http://www.endlessmtnlifestyles.com/?p=8188) At the time, the commissioners were also studying a CCAP redistricting reform proposal and promised to provide the Zimmermans with an answer at their next meeting.

Even though county solicitor Atty. Paul Litwin III had not been presented a copy of the Fair Districts PA proposal since Aug. 10, the commissioners agreed to its support subject to Litwin’s approval. They had seen and were not satisfied with a revised version of the CCAP proposal.

“It was watered down,” Commissioner Ron Williams said of the CCAP version. “Yours is better.”

The commissioners announced the hiring of Mark Phillips as a fiscal office to replace Marie Anderson, effective today. Corey Comstock was hired as a part-time court security officer under the Sheriff’s department.

Sheriff Ed Sherman was in attendance to talk about the current state of the software system that handles all of the records associated with his department. “It’s on borrowed time,” Sherman said of the system installed in 1998. “It’s one update away from crashing.”

“And we’re not going to let that happen,” said Commissioner Tom Henry.

The commissioners unanimously approved the purchase of the Teleosoft program currently used by 30 counties in Pennsylvania, including Bradford and Susquehanna. According to Sherman (below), its benefits include the ability to quickly integrate old records and new and the capacity for expansion as the county’s caseload increases. 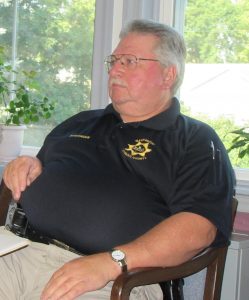 Set up and training for the new software will be completed in about six months, he explained. Normally, the process takes about a year. “They are putting us on the fast track because we don’t have much time,” said Sherman.

Once completed, Sherman added, Wyoming County will have the ability to integrate its data base with that of Sheriff’s departments in other counties that use the software.

Housing & Redevelopment Authority director Lisa Hahn stopped into the meeting to ask the board to approve an extension of disaster recovery funds from 2012. Approximately $13,000 remains from a $224,000 grant for town house development in Nicholson, a project that is underway. Hahn asked that the grant be extended to 2018 so the funds could be used.

Hahn noted that using disaster relief funding in a timely manner is challenging because the government is slow to release the money. The aforementioned grant was applied for in 2012, but the funds were not allocated until 2014. 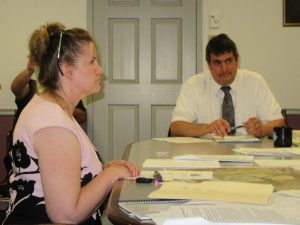 “(It) came out so late after the initial event that most people had done whatever needed to be done,” Hahn (above, left)) stated, adding that a national organization with ties to the Lutheran Church worked with FEMA to meet most of the immediate needs of Nicholson families affected by the 2011 floods.

A public meeting had been advertised for Aug. 22 concerning a proposed modification and budget revision of a 2013 grant of $487,500 for the construction of 16 low- and moderate-income homes in Nicholson borough. None of the commissioners felt comfortable pursuing the discussion as they had not reviewed an email on the topic sent from Hahn to Commissioner Henry.

At first the meeting was delayed while the commissioners and solicitor (above, right) held an executive session on two matters of litigation, as Hahn and other staff members tried to find the email. When the email could not be located, the commissioners moved to reschedule the public meeting to Tuesday, Sept. 5, and asked that it be advertised again.

In their final reports, Commissioner Henry noted that a revamped Community Concert series that kicked off at the courthouse last Friday was successful despite having to be moved inside the courthouse from the gazebo due to bad weather.

“It was so nice to have people walking around the courthouse, checking out the art and enjoying food,” he remarked. “I think there would have been more people here if it hadn’t rained.”

Jazz combo Zingology, led by Brian keeler, performed at the east end of the courthouse. The event was sponsored by the Kitson Arts Alliance.

Commissioner Ron Williams noted that he had recently participated in productive meetings with the Wyoming County Conservation District and with Mike Zimmerman of the Family Services Agency.

The Aug. 22 meeting began with a discussion about a proposed charter school in Mehoopany for which commissioners voiced support. (Read more here: http://www.endlessmtnlifestyles.com/?p=8247)