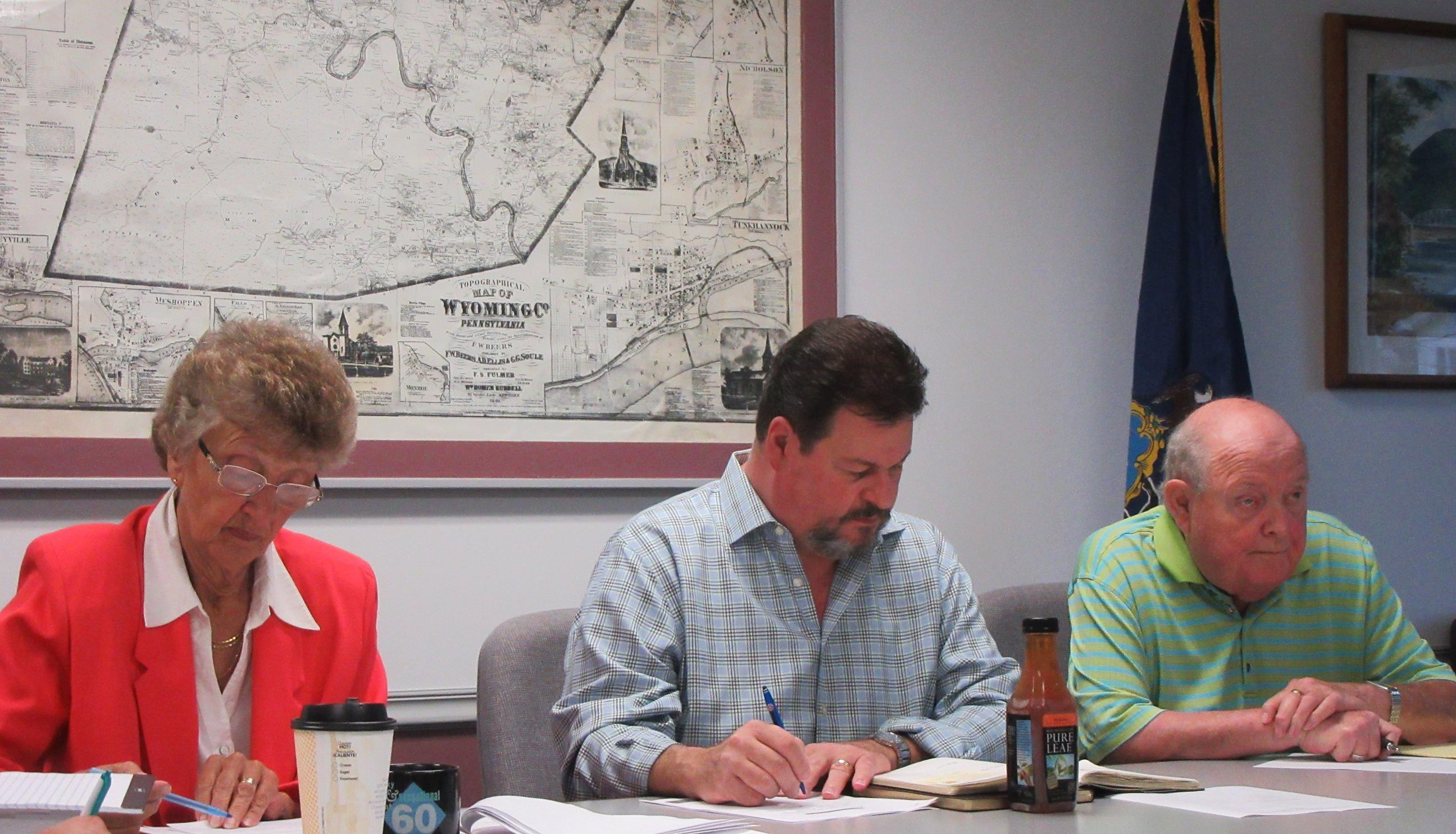 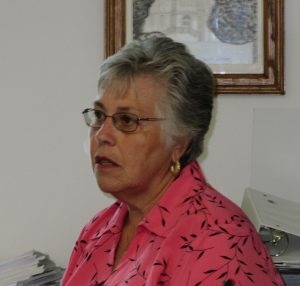 Wyoming County Commissioners (top, from left) Judy Mead, Tom Henry, and Ron Williams met at the courthouse in Tunkhannock on Tuesday, where Forkston Township resident Louise Kling (above) brought new information to the table that further sparked debate about the Housing Authority’s use of disaster funds.

While Wyoming County commissioners were reticent to agree that funds earmarked for flood relief may have been mishandled by the county’s Housing Authority and that property owners may have been mislead, new questions have arisen based on a time line drawn by suspicious residents.

Though technically not related to a controversial PEMA block grant awarded this past spring for property owners in Meshoppen, the commissioners could not deny the appearance that Housing Authority and emergency management officials may be playing a “shell game” with funds that could have been already allocated.

“We want these questions answered,” said Commissioner Tom Henry, adding that the commissioners were not aware of the availability of $500,000 since January of 2016 nor involved with those funds until Lisa Hahn of the Housing Authority approached them at a meeting six weeks ago and asked them to consent to re-appropriating the amount for a low income housing project in Nicholson that has nothing to do with flood victims.

Kling explained that she and her neighbors have been following instructions given to them by Hahn and EMA director Gene Dziak to get a share of expected PEMA grants to repair flood damage to their homes incurred in 2011. The relief never came. In September 2016, the same people were asked to resubmit their applications to possibly get part of several million dollars in the form of a block grant.

What they didn’t know at a meeting held in October 2016, Kling noted, was that the Housing Authority already had $500,000 in hand, with permission to spend it between January 2016 and January 2021.

“Why did she not say ‘I have a $500,000 grant that can be used for people without flood insurance’”? Kling asked the commissioners.

“We were there too, and we didn’t hear it either,” Henry replied.

“How much more money is out there?” Kling asked, suggesting that there could be additional funds that the Housing Authority is not disclosing.

The public hearing concerning the current $500,000 in question was to be held on Aug. 22. It had been legally advertised, but few people were actually aware of it, including the commissioners, who moved to reschedule the public meeting to Sept. 5 and advertise it again. (Read about it here: http://www.endlessmtnlifestyles.com/?p=8265)

Hahn returned on Sept. 5 with John Jennings and Danielle Powell of the Housing Authority to again request an approval to redirect the $500,000. (Read about it here: http://www.endlessmtnlifestyles.com/?p=8374) Kling was at that meeting and raised enough questions (and eyebrows) about how decisions were being made and recipients being identified that the commissioners chose to table the matter and further look into it.

According to Kling, Hahn has since told her that she is not eligible for the funds because, like the block grant for Meshoppen, the money is earmarked for low-income residents.

The commissioners agreed that Hahn said nothing of low-income guidelines associated with the $500,000 at the Sept. 5 meeting. “What you are saying to me is absolutely correct,” Henry continued. “I want the public to know that we are discouraged about this too.”

“We haven’t signed those papers yet, and I refuse to sign them until I know where it’s going,” Commissioner Ron Williams added.

“We’re not about to do that until we know positively that it can’t be used to help you guys or other people,” said Henry.

He related that he had invited Hahn, Jennings and Dziak to attend the Sept. 19 meeting, and that each had prior commitments. But each has agreed to come back to the table, Henry added. “We need them to answer these questions so that it can be reported correctly.”

The next meeting of the Wyoming County Commissioners will be held on Tuesday, Oct. 3 at 9 am at the courthouse in Tunkhannock.

2017-09-19
Previous Post: Vendors and Musicians Provide Many Options for ‘Farmsteaders’
Next Post: Lyme & Tick-Borne Disease Seminar to be Held in Montrose