Small Businesses Get Visits from SBA to Assess COVID Recovery

Will Franssen (back, left) and Rosemary Franssen (back, right) explain to U.S. Small Business Administration representatives Elmo Rinaldi (front, left) and Steve Bulger how the Payroll Protection Program helped their business survive the first seven months of the pandemic.

Administrators from the federal Small Business Administration (SBA) visited the Montrose area on Oct. 22 to find out how the Payroll Protection Program (PPP) had worked for several small business owners and to learn of their specific needs as the agency prepares for a second round of loans. In addition to Diaz Manufacturing LLC, the entourage stopped by Golis Machine Inc. They were impressed by the line of precision parts manufactured at Golis, as well as the way the company owners took care of their employees during the first seven months of the pandemic.

Golis Machine was started in 1972 by George Golis, who had previously worked for Bendix Corporation. The business occupied several buildings in Montrose before the current facility was constructed on Industrial Drive in 1998. The new building gave Golis a fresh start, said George’s daughter, Rosemary Franssen, who is now the company president. Their new look made them attractive to vendors of medical supplies, who granted them solid contracts.

Through the years, Rosemary and her husband and company vice-president Will Franssen hired more than 20 people as their product line grew to include airplane parts for the military and components for SpaceX, the company founded by Elon Musk that is pursuing space travel to Mars while simultaneously bringing the Space Shuttle program up to date.

“We were careful to keep the growth of the company steady,” Will explained. “We never took on jobs so big that we would have to hire employees that would have to be laid off.”

Golis experienced its best year ever in 2019, and the first quarter of 2020 suggested that another record-breaking year was ahead of them. “We could not take on any more work,” sales manager John Mills related. “It was a good problem to have.”

Aerospace production now represents the bulk of Golis’s output, but that and the airline industry were hit hard by the COVID-19 related shutdowns which drastically reduced the number of people who were flying and the need for new airplanes. Needless to say, that had a big impact on the future of Golis and challenged the Franssens and Mills to figure out what the company should be producing and how to maintain their workforce.

“We didn’t understand from the beginning how much it was going to change,” said Rosemary.

Initially, Will explained, the slowdown in orders seemed like a blessing is disguise. Golis had a number of blanket orders – contracts to continue to producing large quantities of specific parts. “This will be great. We’ll get caught up,” he remembers thinking. “Let’s run everything through the summer.”

Then, suddenly the orders started being pushed out by clients – not canceled but not needed in a hurry. Some of the orders were pushed out by as much as a year. Even the medical supplies that the Franssens cited as “essential” and prevented them from an immediate shutdown were no longer in demand.

“I was surprised with the medical industry and how much they slowed down,” Will remarked. “I would have thought that would keep going, but they were only focused on the COVID.”

The thought of letting go of any of their talented staff was difficult to the Franssens. “It was killing us,” said Will. “We had worked very hard to build that team.”

They made the painful decision to furlough a few staff members, and one opted to resign, reducing their workforce from 23 to 15. “We miss them, but the work dropped off so fast, there was nothing for them to do,” Rosemary added, “and it’s still tough to give the furloughed employees a positive report.”

About the same time the SBA announced the availability of PPP loans, the Franssens got a call from their bank, asking if they were interested. “At first, we were thinking ‘This isn’t something we should have to do,’” Rosemary recalled. “We thought things would pick up.”

Another situation was manifesting itself as a result of the federal government adding $600 per week to unemployment compensation, leaving workers in some industries reluctant to return to their jobs where they would earn less. “We didn’t want our employees even thinking that,” Will noted. “If your people stay here and get you through the storm, you have to appreciate that.”

That’s when the Franssens opted to take out a PPP loan to buy them some time. They also increased everybody’s salaries by five dollars per hour, which they classified as “hazard pay.” Equally concerned about the health of their workers, they initiated stringent policies to adhere to CDC guidelines.

“The PPP helped us keep people around who we could not afford to lose,” Will stated.

“We were grateful for it,” Rosemary remarked.

“Our guys were really appreciative that we didn’t just shut our doors when the push outs came in,” Will concurred.

SBA Eastern PA district director Steven Dixel complimented the Franssens on their compassion and forward thinking. “You survived as a result of caring first,” he insisted. “Your success is a reflection of how you treat your employees.”

After listening to their story and admitting that they had never known that Golis Machine even existed, the SBA administrators promised to work more closely with the Franssens to process their loan forgiveness application and to keep them apprised of the next round of PPPs when they are approved. There are funds leftover from the first round, SBA Region 2 administrator Steve Bulger maintained, but the rules have not yet been hammered out. “This will be more restrictive – a more targeted program,” he suggested. “But the money is already there, and we want to get it out to the small business community.”

“Only by us meeting with small businesses every day can we make the changes at the federal level,” SBA Region 3 advocate Elmo Rinaldi told the Franssens. “Any regulation that is burdensome to you, our job is to remove it or change it so there is an equal playing field.” 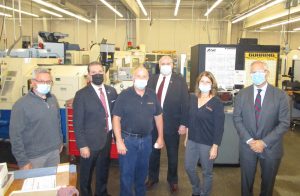 Participating in a tour of Golis Machine in South Montrose last Thursday were (above, from left) Golis sales manager John Wills, Elmo Rinaldi of the SBA Office of Advocacy, co-owner Will Franssen, Steve Bulger of the SBA, co-owner Rosemary Franssen, and Steven Dixel of the SBA.