In: Wyoming County Government
With: 2 Comments

Wyoming County EMA director Gene Dziak delivered some of the best and worst news of the week at the regular meeting of the Wyoming County commissioners on Tuesday morning. He was excited to announce that every fire company in the county will be receiving new Altair 5X gas meters that report data in real time via Bluetooth technologies to the Emergency Operations Center (EOC). 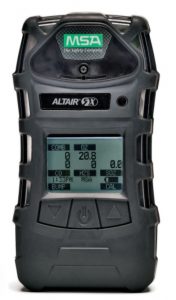 Situations that can be assessed may be as isolated as a carbon monoxide leak in a home to a large scale leak at a natural gas site. In the case of a more wide spread release, the info can also be emailed immediately to the DEP. The units will be distributed at the monthly fire chiefs meeting to be held at 6 pm on Thursday, Nov. 5, at the EOC. Funding was provided by the PA Local Emergency Planning Committees, which will save the fire companies more than $1,700 each plus calibration costs. Calibration can be done remotely from the EOC.

“Gene has done a lot of work on this to make sure that every fire company in Wyoming County has the same equipment that can be coordinated at the county level,” commissioner Ernie King remarked.

The unconfortable news was that positive COVID-19 numbers are rising dramatically in the county. Dziak didn’t want to get ahead of the daily state report but suggested that the data was disheartening. Figures released from the PA Department of Health on Tuesday indicated 12 new cases here since Monday. Many of the new positive test results, he noted, have been reported at The Gardens at Tunkhannock, a nursing home on the west end of town. “The bad news is that it’s there,” said Dziak. “The good news is that most of the cases are asymtomatic.”

Though the increased pushed Wyoming County onto the “moderate risk” list, sandwiched between high-risk Bradford County to the northwest and Lackawanna and Luzerne counties to the southeast. Dziak and the commissioners conceded that the numbers will likely continue to rise as testing increases, and that the percentage of positive cases and deaths per 100,000 is much lower here (9) than in the aforementioned counties.

“We’re doing more testing lately, so it show that more people have it,” Wilbur remarked. To the best of their knowledge, testing is available at CVS in Tunkhannock via drive-through and at Tyler Memorial Hospital by appointment.

“It’s here and it’s staying here for awhile,” Dziak maintained. To keep the bad numbers lower here, he continued, “People need to understand that they need to wear masks. They need to social distance and wash their hands often.” Dziak also encouraged users of social media sites like Facebook to be wary of posts and comments about COVID that seem outlandish after the total number of cases in the county (114) were misconstrued on Monday as new cases. Today’s total stands at 126.

In other COVID-related news, the commissioners noted that Lackawanna Trail school students were back in their classrooms yesterday after 14 days at home and that the Tunkhannock School District has apparently been able to isolate the one known case there.

In other EMA-related news, Dziak sought permission from the commissioners to bring an intern to the EOC via Trehab. A Washington Park resident will be a part of the EOC staff for 24 weeks while also pursuing her GED. One of her first tasks will be assisting in distributing PPEs with the Election Board next week.

“She already has an interest in EMS,” Dziak noted.

“It’s the best of both worlds,” said commissioner Tom Henry, who added that the program has produced some very good help for the EOC in previous years. The board subsequently approved her appointment.

Commissioner Rick Wilbur provided an overview of recent meetings in which he and the other commissioners have attended, including one with Bennecon to plan for next year’s health insurance. The increase of seven percent (~$80,000) is less than previous years, Wilbur related, “But it’s still substantial. It’s an expense we are going to have to eat.”

The commissioners have been previewing a new website developed by Moodus Media and are satisfied with what they are seeing and expect it to be an asset to the community. “We’re going to be using our website to make the courthouse more accessible,” Wilbur explained. “It really looks good.” The new website, which the commissioners expect to go live after the election, will not the cost the county any money, as it is being paid for by government COVID relief funds.

The recent announcement that Lackawanna College will be opening a campus in Tunkhannock has motivated the commissioners to collaborate with both Lackawanna and Keystone College to increase enrollment of Wyoming County residents. The idea is still fresh, but the commissioners suggested that they’d like to find some scholarships to distribute as incentives. While the Lackawanna College branch will be primarily focused on certifications for the natural gas industry, the school will also offer courses in business and human services (Read more here: http://www.endlessmtnlifestyles.com/school-of-petroleum-natural-gas-moving-to-tunkhannock/) Keystone College straddles the Wyoming and Lackawanna county lines at Factoryville and La Plume.

Important upcoming meetings include further discussions with the Northern Tier Regional Planning & Development Commission and the Sullivan County Commissioners to potentially promote the two counties jointly to businesses looking for new locations. Whether or not the adjacent counties form an official coalition, Wyoming County will still have a new Industrial Development Association (IDA). Wilbur suggested that the formation of such a group is getting closer as the board interviews motivated members of the business community from a variety of backgrounds.

A second meeting regarding future use of the Roadside Rest park along Bowmans Creek and Route 29 will be held at the Eaton Township Building at 7 pm on Wednesday, Oct. 28. The general consensus after a meeting held last week at The Gathering Place, according to Henry, is that most people want to see it reopened as it was before it became too popular with illicit drug users and people from out of state who were dumping litter. In the meantime, Wilbur noted, anglers may continue to access the creek there.

The commissioners have extended the deadline for their “Drug Free” poster contest to Monday, Nov. 30 due to a surprisingly low response. Three prizes of $100 each will be given to fifth graders in the six school districts where Wyoming County students reside.