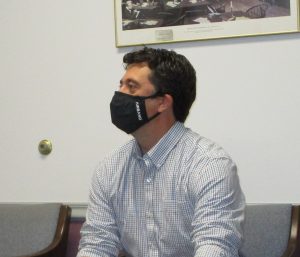 Sheriff Bob Roberts was on hand at the regular public meeting of the Wyoming County Commissioners on Sept. 28 to offer a recap of the recent “response to lethal threat exercise” held at the courthouse, also known as an “active shooter drill.” Members of various law enforcement agencies, including some from Sullivan and Susquehanna counties, participated in the exercise, which ran from 7:30 am to 4 pm on Sept. 18.

Roberts related that some who were in the courthouse for the drills were impressed by the scope of the training, compared to similar exercises that they had participated.

“The scenarios were very realistic,” commissioner Ernie King concurred. “I learned a lot. We covered a lot of bases.”

“We have learned what we needed for the meantime,” Roberts continued, noting that he had just received a report on the drills that he will review to make recommendations for improvements in the system. “We’re trying to get ahead of some mandates that are coming from the AOPC (Administrative Office of Pennsylvania Courts).”

On a similar note, commissioner Tom Henry said that there was a disturbance at the courthouse the previous day that led to a 911 call and the involvement of the sheriff’s office. As the incident is under investigation, the name of the individual was not disclosed, but Henry and King made the decision that the male had to leave the courthouse.

Thermal Imaging Cameras to be Purchased

At a recent meeting between the commissioners and the Local Emergency Planning Commission (LEPC), it was decided that all emergency response units in the county should have the same thermal imaging cameras that would allow them to see into smokie situations that reduce visibility. Local gas companies and other industries routinely contribute to a LEPC fund, which has provided portable gas detectors for first responders in the past.

“They all have the gas monitors, which are programmed at the EMA center,” King explained. “We’re trying to make everything common between all of them.”

Mandatory training will be required prior to receipt of the industrial-grade thermal imaging units, which have not yet been purchased yet, according to commissioner Rick Wilbur. They will likely cost about $1,200 each.

After months of not offering recycling to county residents and then reopening with restricted hours, the commissioners reported that the county’s recycling program is rebounding nicely.

“The good news is that commodity prices are way up from last year,” King stated.

It was suggested that the amount paid for processed recyclables has increased tenfold in the wake of supply chain shortages across the nation in the wake of the pandemic.

The public has been responsive to the resumption of recycling intake on Saturdays at the facility in Tunkhannock Township. Henry added that Proctor & Gamble has been bringing in a tractor trailer load of recyclables per month, much of it discarded water bottles being used at the plant in Mehoopany since water coolers were removed due to safety concerns.

County officials are also engaging in discussions with municipalities in an effort to resume recycling efforts that have been discontinued or to consider start-ups of new programs.

The commissioners unanimously approved an agreement with Tunkhannock Township for the training of a K-9 officer and adoption of a police dog that will be paid for with a grant. Tunkhannock Borough recently opted not to engage in the program, but sheriff Roberts said that the borough’s residents will still benefit from the Township’s decision. “They cover additional townships, so it will actually cover more people,” he remarked. “They’ll even go into Eaton Township if necessary.”

In addition to helping specially trained officers locate illegal substances, chemicals and explosives, the dogs can help identify people who have been in contact with illicit substances, track kidnapped or missing persons, and locate buried bodies or body parts.

County 911 mapping and addressing coordinator Chas Mead was invited by the commissioners to answer questions about the annual GIS contract with the Environmental Systems Research Institute, a national leader of GIS programs for county EMAs.

According to Mead, the county has worked with ESRI for at least a decade and uses an extremely cost-effective program that is population-based and reimbursed through 911 wireless funding.

The biggest cost savings offered by ESRI is that Wyoming County EMA is given ample credits to publish all layers of their GIS system to an Amazon cloud. “We don’t have to host any information, which is good for security reasons,” Mead stated. “I can push all of that to the website.”

The commissioners suggested that all county residents take the time to visit the EMA’s website page to see how much information is available to the public there. (https://wycopa.org/directory/gis-and-mapping/)

Commissioner King has been working with local municipalities, the Northern Tier Regional Planning & Development Commission, and other agencies to find solutions to dilapidated and unsafe properties in the area. “Anybody who drives through this county knows we have a serious blight problem,” said King.

Much of the problem, he suggested, is that many of the state-allowed ordinances are at the municipal level and not the county level. He is working with other organizations and counties to learn how to develop an “enforcement arm” for those policies. He is looking into a program developed in Carbondale that has shown success, issuing parking ticket-like notices that are followed up by law enforcement if ignored.

With the help of NTRPDC, he added, there might be a suitable regional approach that would bring in funding for demolition of some properties and rehabilitation of others.

(The Commissioners Meeting was preceded by a meeting of the Wyoming County Prison Board. Click here to read about it: http://www.endlessmtnlifestyles.com/visitation-resumes-at-jail-but-no-group-meetings-yet/)